The second match-up of the Elate Eight pits a renowned preacher and bishop against a tireless lay woman. Both were spiritual giants, although at six foot six and nearly 300 pounds, Brooks was also a physical giant.

To get to this point, Phillips Brooks defeated Simeon and Catherine of Siena while Julia Chester Emery was victorious over Charles Henry Brent and F.D. Maurice. Don’t forget you can see all the previous match-ups to refresh your memory about the contestants by going to the bracket page and scrolling down.

Yesterday saw Lydia sneak past Basil the Great in another squeaker 51% to 49%. Yowza! Fortunately there was no great scandal with this battle as there was in the Charles Wesley/Thomas Merton match-up. To put everyone at ease, please know the Supreme Executive Committee keeps Jimmy Carter on retainer as an impartial election observer. Also, one member of the SEC used to work for IBM so BIG FATHER is always watching.

Maple Anglican has released his daily Archbishops’ Update featuring everyone’s favorite Lent Madness colour commentators. which you can watch here. And we’re getting closer to our goal of 10,000 likes on Facebook before the Golden Halo as we’re now pushing 9,740. Spread the word! 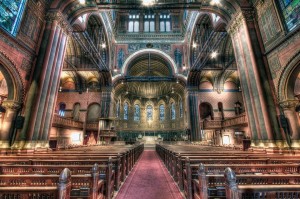 Phillips Brooks’ Trinity Church was the first Episcopal Church I ever entered. It was 1980, and The Empire Strikes Back had been released that summer (retain this important detail). I was on a college orientation trip to Boston with 400 other freshman, and one stop was Copley Square. Trinity Church beckoned and, as I stepped inside, the spectacular sacred space of Brooks’ imagination stunned me. Christian and Missionary Alliance churches didn’t look anything like this.

But enough of this reverie! Let’s get to the saintly kitsch! 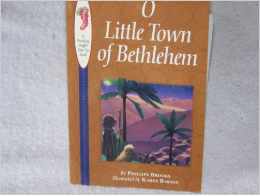 A cursory search for Phillips Brooks treasures on Zazzle turns up the usual pithy quote-bedecked beer stein and travel mug, both a whopping $29.95, and sporting a particularly Victorian-sounding epigram: “Jesus Christ, the condescension of divinity, and the exaltation of humanity.”

The young children in your life might like this O Little Town of Bethlehem stocking stuffer pop-up book on Amazon.A visit to the web store of the Phillips Brooks Elementary School in Menlo Park, California, turns up the requisite long-sleeved t-shirt for only$29.99. 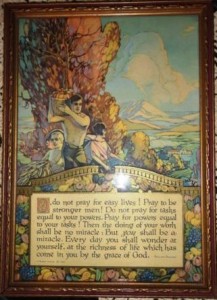 But where are the items of devotion for a man whom Peter Gomes described as the most famous American preacher since Cotton Mather? Where are the commemorative goods for the first American minister to be invited to preach at Westminster Abbey? The man who had 15,000 Bostonians turn up for his funeral.

Where, where you ask? The answer, in a word, is Ebay.

My first find is this rather spectacular lithograph with a quote from one of Brooks’ sermons can now be  yours for $89.99 OBO. “O, do not pray for easy lives! Pray to be stronger men! Do not pray for tasks equal to your powers. Pray for powers equal to your tasks!” it begins.

That first search led to dozens, nay, tens of dozens of vintage Brooks books and memorabilia. For just $3.00 you 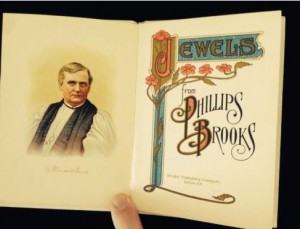 can own a lovely volume from 1908 titled, Jewels of Phillips Brooks. It contains color plates and pithy quotes from his sermons and is way better (and cheaper) than a coffee mug. 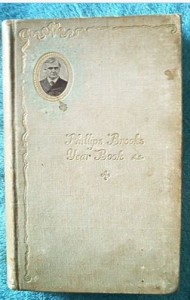 There is even a Phillips Brooks precursor to Forward Day by Day published shortly before his death, a “yearbook” that offers “day by day guidance to live a meaningful life, for yourself and for others.”

One of the most remarkable finds is this 1953 wall calendar that commemorates Phillips Brooks. 1953! Such was the appeal of his preaching and wisdom and the longevity of his reputation that 60 years after his death people were still buying calendars upon which to note their dentist appointments. You can own this “used not abused” calendar for a mere $12.99 plus $3.00 for shipping. 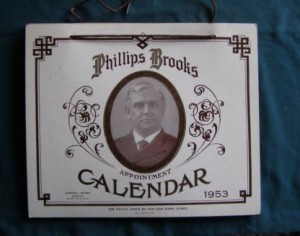 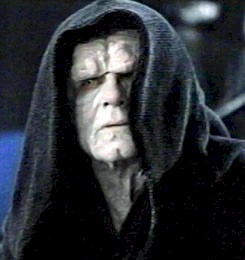 But now we must return to Copley Square in 1980. Somehow upon entering the church I missed the famous statue of Brooks by the sculptor Augustus Saint-Gaudens that was installed in 1910. Saint-Gaudiens had intended to place a stylized angelic figure behind Brooks. But, alas, he died in 1907 before it was completed. However, a group of artists decided a depiction of Jesus would be better. Unfortunately they designed the creepiest Jesus ever cast in bronze, whom I would have immediately identified, having seen The Empire Strikes Back three times that summer, as Emperor Palpatine.

Here’s what I believe: The real and loving Jesus steered me clear of the creepy statue-Jesus and led me into 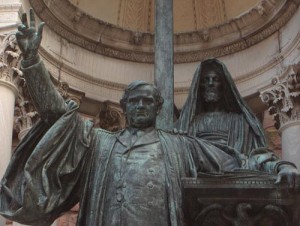 Trinity Church, because having seen it first, I would have turned around and gone to get a coffee at the old Harvard Book Store Cafe on Newbury Street. Instead I entered and the beauty and peace of that sacred space lodged itself in my heart and opened a door for a new way of thinking about the mystery of God.

Thank you, Phillips Brooks. Without your life and witness and your perseverance in building that stunning church, I might have turned out to be a CMA missionary in some remote, buggy place with spotty Internet and poisonous snakes. 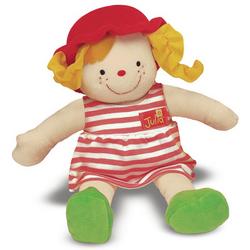 Although her influence in the Episcopal church was far-reaching (remember how as national secretary of the Women’s Auxiliary of the Board of Missions for the Episcopal Church from 1876 to 1916 she visited EVERY DIOCESE and set up more than 5,600 chapters of what is now the Episcopal Church Women (ECW)? How she visited missions all over the Far East as well? And how she championed the canonical office of deaconess? And how she created the United Thank Offering (UTO)?), Julia Chester Emery’s actual likeness appears on … basically nothing. As Forward Movement notes: “She was a modest and self-effacing Victorian lady who was so careful to stay out of the limelight …” 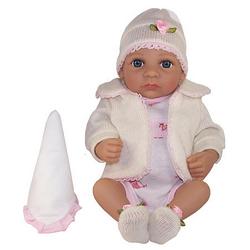 Still, as such a major figure in the church and in the world through her encouragement and support of missionaries (we know that she was a major inspiration for all sorts of wonderful things. For instance, look at all these Julia dolls! Clearly she is the model for the cute baby, the adorable toddler wearing Crocs, AND the demure teen. Clearly she is the model for the “My Friend Julia” machine washable doll! 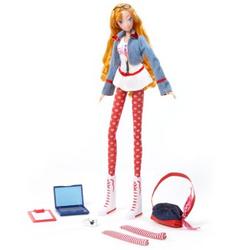 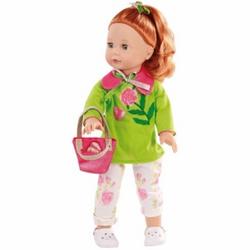 (OK, and this last doll is actually inspired by Christina the Astonishing, who, sadly, did not survive the first round even though lots of people wanted to see what sort of kitsch she inspired, so here you go.) 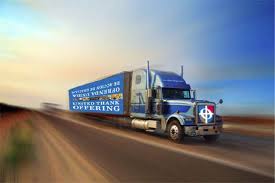 She also clearly inspired the trucking industry! How many people can say that? 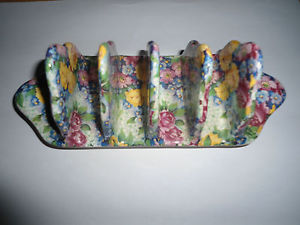 Also, check out this toast rack in the “Julia” pattern from Royal Winton china. Perfect for holding your Virgin Mary and/or Jesus toast. (There are salt and pepper shakers, teapots, and other lovelies in the Julia pattern, too.) 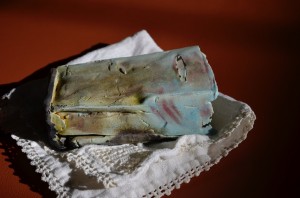 Now, all of these other Julia-inspired items are available for purchase, somewhere. (Well, maybe not the truck.) However, there’s another Julia item that is unique and priceless, and I own it. It’s almost like a relic. This is a raku pottery UTO box (circa 2000) made by my son when he was in elementary school.

So vote for Julia and send her to the round of the Faithful Four!