If you woke up to the sound of Tim's voice this morning, we apologize. If your commute was rudely interrupted by talk of Lent Madness, we're sorry. If you spilled your skinny latte all over yourself and nearly drove your Volvo off the road at the mention of the Golden Halo, we're not liable (according to the Lent Madness Legal Team).

Such are the vagaries of having a story about Lent Madness appear on National Public Radio's Morning Edition. Reporter Deena Prichep spoke with Tim and then met the Lent Madness fanatics at St. Gabriel's Church in Portland, Oregon, a couple of weeks ago and the resulting story aired this morning.

We hear from St. Gabriel's vicar, the Rev. LouAnn Pickering, along with some folks who are "representing" one of the 32 saints in this year's bracket. 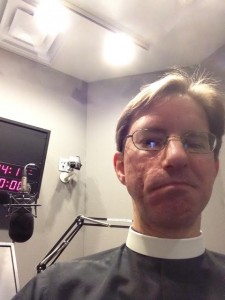 Sure, there's some confusion between which of the Wesley brothers wrote all those hymns (we know it was Charles), but the sense of participatory joy comes through loud and clear.

Whoever wins this year's bracket, Lent Madness 2014 will go down as a devotion that shows no partiality when it comes to media coverage. What other Lenten devotion can claim it was covered by both FOX News and NPR? Talk about Red State/Blue State ecumenism!

Thanks to all of you who continue to embrace this madness in the spirit in which we intend -- as a devotion to help introduce or re-introduce some pretty amazing folks who have served Jesus in their own way and in their own day. Sure, we have some fun along the way and, of course, Lent Madness isn't for everyone (certainly not the humorless). But, as Scott likes to say, "If you don't like it, go start your own online Lenten devotion."

In the meantime, please help us continue to spread the word about Lent Madness by liking us on Facebook, following us on Twitter, and illicitly making copies of the bracket at your office and then dropping then from a helicopter over your neighborhood. We'll see you tomorrow as Phillips Brooks takes on Catherine of Siena.