We started Lent Madness 2014 with 32 saints and now we're down to four. The Faithful Four. Who will win the coveted Golden Halo? Only a few short days and your voting participation will give us the answer. But it's come down to this: Lydia, Harriet Bedell, Charles Wesley, and Phillips Brooks.

Today we begin the first of two Faithful Four match-ups as Lydia takes on Harriet Bedell. In this round we ask our Celebrity Bloggers to briefly answer one question: "Why should Saint XX win the Golden Halo?" Speaking of which, how about a round of applause for our fabulous CB's who toil away in the salt mines of Lent Madness without nearly enough recognition? They are truly the backbone of this operation and are worthy of our gratitude. Please do hound them for autographs when you spot them wearing sunglasses and baseball caps just trying to lead normal lives.

To make it to the Faithful Four, Lydia defeated Moses the Black, John of the Cross, and Basil the Great while Harriet turned back Joseph Schereschewsky, Thomas Gallaudet, and Harriet Beecher Stowe. (click on the names of defeated opponents to view previous match-ups and refresh your memory about these two saintly women).

And, in case you were wondering, we're tantalizingly close to our goal of 10,000 Facebook likes. Over 9,920! Encourage that freshly minted teenager who just became eligible for an account to like us. Compel your grandfather for whom you just did spend the last five hours setting up his new computer and teaching him how to use Facebook to join the Lent Madness party. We can do this! 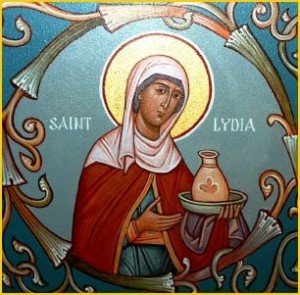 St. Lydia, unlike other saints, stands in the shadows. No legends, no stories of miracles, no healings. She just shows up in Acts, does her thing, disappears again. Yet she has lasted. She is a saint of paradox, standing with feet in two worlds..

Her very name, in Acts, is a contradiction. She’s Lydia Thyatira, which indicates she is from Thyatira, a town known for its dyeworks, but she appears in Philippi of Macedonia. She must have moved her family from the small town to the more-bustling crossroads of Philippi at some point. She’s a transplant, at a time when people didn’t move from their hometowns. She’s from two places at once.

She’s a powerful business woman in her community and head of her own household. That’s rare in her time and place. While we have other examples of female heads-of-households during the Pax Romana, it wasn’t common, and Lydia running her own prosperous dye business would have raised a few eyebrows, and caused a few Roman patriarchs to despair for the soul of the Empire. A strong woman in a strongly patriarchal society, she would not have been the most popular person.

Paul and Lydia, Church in Philippi

When we meet her, she is praying with the Jewish community, but she hasn’t converted. And she’s not at the synagogue; she’s at the riverbank, with the other God-fearers. Even when it comes to matters of faith, she’s holding several things in tension.

And yet, when she meets Paul, she’s drawn to the Jesus that he preaches, to the Jesus that he describes. She is immediately baptized, along with her entire household. And her life is changed. From that moment on, the entirety of her wealth, her status and her resources are dedicated to starting and sheltering the Christian mission in Philippi.

It’s impossible to crawl in the mind of another person, so who knows what drew her that day by the river. But perhaps part of the attraction was her unique blend of paradoxes. Perhaps she recognized in Jesus a sort of kindred spirit, who held together in himself the ultimate tension of heaven and earth, God and humanity. 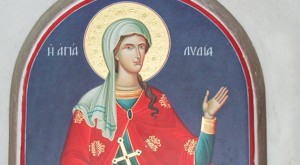 Perhaps she found in Paul a kindred spirit who recognized her full potential for, in the words of Paul himself, “In Christ there is neither Jew nor Greek, male nor female, slave nor free, for all are one in Christ Jesus our Lord.”

Whatever the case, since then, she has been an inspiration for countless others to find their own voice in ministry. The ministries, the churches dedicated to Lydia testify to her enduring legacy. Even though not much is known about her, and even though the political whims of the later church never allowed for the popular devotion accorded to other saints, Lydia’s unique brand of dedication, perseverance, and faith have inspired many in their faith.

So who better to wear the Golden Halo than Lydia? Let’s give it to the woman who emerged from the shadows to lead the early church, and poured all she had, paradoxes and all, into the Gospel. 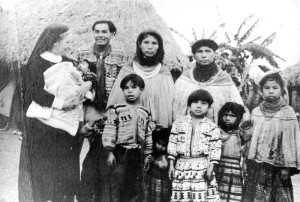 Last summer the assignment of saints descended from the Supreme Executive Committee. I scanned the list for mine, pausing at Harriet Bedell. I had no idea who she was. These many months later, I am glad for the privilege to learn her story and to share it with you, the citizens of Lent Madness Nation.

Bedell’s story is infused with the stuff we associate with saintliness: charity, sacrifice, poverty, tenaciousness, courage, humility. The beauty of her story is also measured by the frailty that seeps through her narrative. In her early thirties, when she first arrived at the Oklahoma mission, she blanched at learning to ride a horse. Rather than embarrassing herself by asking tribal members to teach her, she took a horse out on the range and taught herself to ride in private. We can only imagine the bumps, bruises, and wounded pride she sustained in the process.

Nothing is wasted in God’s economy. Bedell’s experiences in Oklahoma paved the way for her years in Alaska just as those years prepared her for her 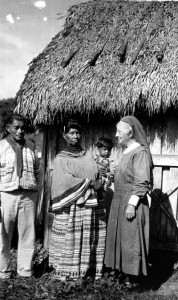 long ministry among the Seminole in Florida. “Miss Harriet Bedell, of long experience in Indian work...for three years past has lived in...one of the most isolated spots in interior Alaska,” wrote Hudson Stuck, Archdeacon of the Yukon, in 1920. “Such a post requires a missionary entirely absorbed and happy in the work, and such a one is Miss Bedell.”

Her devotion to God and to the people she served may have been grounded in faith but its expression was always practical. The naturalist Thomas Barbour called her, “a hard-nosed realist.” And no account of Harriet Bedell would be complete without a listing of her no-nonsense “Rules of Life.” 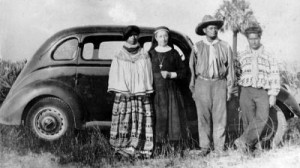 That sacrifice serves as a remarkable example. Bedell, who died in 1969, never saw a movie or owned a radio. She lived a life solely focused on her call from God. Marya Repko’s biography, Angel of the Everglades, records a letter from Bedell to Bishop John D. Wing of the Diocese of South Florida. She wrote, “Our days are very full and it is so impossible to work at letters. The care of the sick is an important part of our work. They send for us or bring their sick ones to the mission...In the glades visits we often find medicine-men caring for the sick. At first they were not friendly but going as we do with Indians they saw we wanted to help.”

Repko writes, “When an influenza epidemic broke out in 1937...she took the sufferers into her own home where she fed them soup and aspirin. Her efforts were appreciated by the Medicine Man who called her ‘sister.’ She was also known as “in-co-shopie,” the woman of God.”

119 comments on “Lydia vs. Harriet Bedell”