Phillips Brooks vs. Catherine of Siena

Today's match-up features two saintly souls with devilish potential for misspellings. Calling Phillips Brooks "Philip" is like calling Johns Hopkins "John" while spelling Catherine's home of Siena with two "n's" rather than one is like spelling Saint Monnica with one "n" rather than two. Wait, what? Anyway, there's a lot of spelling on the line in today's match-up.

Yesterday, besides hearing Lent Madness featured on NPR, Lydia sent John of the Cross to Dark Night of the Soul redux 58% to 42%. It was a bad day for snails but something tells us we'll be hearing more about escargot during the Saintly Kitsch Round when Lydia faces Basil the Great. 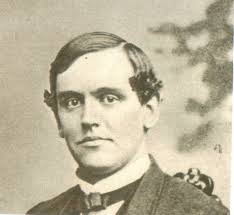 A dozen years ago Ellen Wilbur, a short story writer and member of Trinity Church, Copley Square in Boston, sought out Phillips Brooks’ sermons. A search yielded fragile, incomplete copies, some of which fell apart in her hands.

“I’d never read a book of sermons in my life, and now wanted to read nothing but Phillips Brooks. There was something wondrous about the loving voice with which he spoke and the utter faith which underlay and glorified all of his preaching,” Wilbur wrote in the preface to a collection of sermons she edited in 2003 titled The Consolations of God.

Peter Gomes, the late professor at Harvard Divinity School, wrote in the book’s foreword, “Even in print, and at the remove of a century, Brooks sounds well, which is no small thing when few sermons last beyond lunchtime.”

In one sermon Brooks inspired people to serve God whatever their station in life, not least, perhaps, his wealthy Back Bay parishioners.

Strike God's iron on the anvil, see God's goods across the counter, put God's wealth in circulation, teach God's children in the school— so shall the dust of your labor build itself into a little sanctuary where you and God may dwell together.

If you are not spiritually minded, do not wait for mysterious light and vision. Go and give up your dearest sin. Go and do what is right. Go and put yourself thoroughly into the power of the holiness of duty.

All the world is an utterance of the Almighty.

Brooks seemed not to worry about the scholarly detractors who dismissed him as an intellectual lightweight. Gomes wrote,  “Brooks consistently practiced biblical preaching...he understood that part of his task was to open the treasures of the Scriptures to his people; and it was his pastoral concern for the human condition and its relationship to the eternal truths of the Christian gospel that made him a biblical preacher and not merely an orator on religious themes.”

Brooks was a rare breed of priest: a standing-room-only preacher and a deeply caring pastor, something people of all faiths and classes recognized. In 1893, after serving only 15 months as bishop, Brooks died, and the city of Boston grieved. M.C. Ayers, editor of the Boston Daily Advertiser, wrote after his funeral, “It was the people who were quickest to discern the incomparable worth of Phillips Brooks. They knew him, flocked to him, loved and trusted him.”

As usual, it comes down to love. Brooks knew he was entirely beloved of God and thus free to bestow upon his people lavish attention and words to stir their hearts to serve God. 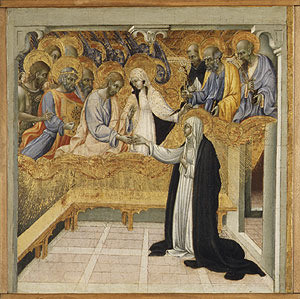 Catherine of Siena, the 14th century mystic, politician, carer for the poor, and all-around saintly all-star, was an overachiever on several fronts.

She was only seven when she had her first vision of Christ, but her visions kicked into high gear when she was in her mid twenties. She received the stigmata when the crucifix she was praying in front of exploded with five red beams of light, which pierced her hand, feet and heart. That same year, she had a vision in which Jesus appeared, and seemed to exchange her beating heart for his. When she received the Eucharist, she saw the bread become the Child Jesus floating down from heaven to earth to rest in the priest's hands. Once, when she gave the usual response to receiving the host ("Lord I am not worthy that you should enter under my roof"), she heard a voice respond, "But I am worthy to enter you." As she received the bread, she said later that her soul merged with God so that "the soul is in God and God in the soul, just as the fish is in the sea and the sea in the fish."

But all this vision-having did not make her popular with the local clergy of her time, most of whom found her befuddling, even frustrating. One Franciscan, Fr. Lazzarino, was very bothered by her, and sought a meeting to explain why she was Doing Faith Wrong. This did not go well for him, since meeting Catherine in person, and asking for her prayers, caused an acute attack of guilt that evening. He realized that he had not been following the Franciscan path as he had vowed as a youth, and he raced back to Catherine the next morning to apologize, and to give away all he owned to the poor.

As Catherine's reputation as a great persuader spread, she was sought out by popes and politicians as well -- and not just for guilt trips. She was a sought-after counsel to two popes, including Urban VI. She and Urban had such a close relationship that she would chide him frequently to curb his arrogance, and he insisted that she come to Rome to help him lead the Vatican.

After her death at age 33 in Rome, the people of Siena wanted to bring her body back home to be honored. One man from Siena tried to bring back just her head, but was stopped at the Roman gates by soldiers. He prayed to St. Catherine, and miraculously, when the bag was inspected, it had transformed into rose petals. To this day, Catherine’s head (and thumb) reside in Siena, and her body resides in Rome.

Phillips Brooks vs. Catherine of Siena

108 comments on “Phillips Brooks vs. Catherine of Siena”