Sure, almost everything we know about Cuthbert, we learned through the writings of Bede. Had Bede known that he would one day square off against Cuthbert in the saintly smackdown, perhaps he would have written a different tune? Nonetheless, these two face one another in a rare battle of contemporaries. The winner will go up against Molly Brant.

Yesterday we saw one of the greatest routs in Lent Madness history with Kamehameha spanking William Laud 84% to 16%. He'll go on to face David Oakerhater in the Round of the Saintly Sixteen.

Speaking of routs, our bracketologists did a bit of digging to unearth where Kamehameha's victory ranked among the annals of Lent Madness blowouts. In 2013 Florence Li-Tim Oi, the first woman ordained in the Anglican Communion, defeated Chad of Lichfield by the same percentage, 84% to 16%. Talk about your hanging Chad...

But the greatest blowout in Lent Madness history, percentage-wise, came in the very first year this devotional started. In 2010, Francis of Assisi defeated Aelred of Riveaulx 87% to 13% in the Elate Eight. For the record, Francis lost to Julian of Norwich in the Faithful Four that year and is now back in the bracket for the first time since. 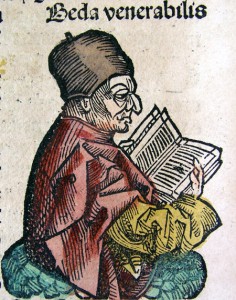 The Venerable Bede is among Christianity’s greatest scholars, having produced numerous commentaries on scripture, hagiographies of the saints, and studies of chronology and timekeeping. He is best known for his Ecclesiastical History of the English People, the premier source of information about the development of Christianity in England from the time of Augustine’s arrival in 597 until 731 CE.

Very little is known about the details of Bede’s life. He was his own primary biographer, offering the briefest annotations at the beginning and end of his Ecclesiastical History. Preferring to remain a simple “servant of Christ and Priest,” Bede traced the broadest outlines of his life: he entered the monastery at Wearmouth at age seven, and, when a new abbey was founded at Jarrow in 682, he transferred there. He was ordained as a deacon at age nineteen and a priest at age thirty and ultimately remained at Jarrow for the vast majority of his life. Over the course of his life, he joyed in “wholly applying myself to the study of scripture, and amidst the observance of regular discipline, and the daily care of singing in the church, I always took delight in learning, teaching, and writing.”

Bede’s delight in learning, teaching, and writing provides us with much of the history of the Church in England. Bede reported Pope Gregory the Great’s dispatch of Augustine to England in 597, and after the baptism of Ethelbert in 601, Augustine’s appointment as the First Archbishop of Canterbury. Bede’s Ecclesiastical History introduced us to the tale of Alban, the first martyr in England, and his faithful confession that “I worship and adore the true and living God who created all things.” Through Bede we learn much of our history of the various abbots of the Holy Island of Lindisfarne, most especially Cuthbert. And Bede introduces us to Hilda and the influence of her abbey at Whitby.

As one of the church’s saints, Bede’s witness shines brightest in his constant dedication in bringing the world to know the light of Christ shining in countless others, so that their witness may shine to the Church throughout all ages.

Heavenly Father, you called your servant Bede, while still a child, to devote his life to your service in the disciplines of religion and scholarship: Grant that as he labored in the Spirit to bring the riches of your truth to his generation, so we, in our various vocations, may strive to make you known in all the world; through Jesus Christ our Lord, who lives and reigns with you and the Holy Spirit, one God, for ever and ever. Amen. 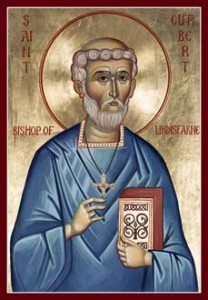 In the Venerable Bede’s The Life and Miracles of St. Cuthbert, Bishop of Lindesfarne, we read, “He was affable and pleasant in his character...he would introduce, in the meekest way, the spiritual benefits which the love of God had conferred upon himself. And this he took care to do in a covert manner, as if it had happened to another person.”

Cuthbert’s life, marked by miracles and adventure, was also a life of profound kindness. He grew up an orphan shepherd and spent days in quiet solitude tending flocks in the pastures of Scotland. He took holy orders at age seventeen after having seen a vision of angels bearing a saintly man toward heaven. This vision coincided with the death of Saint Aidan — ostensibly Cuthbert saw the saintly man being carried to heaven.

Cuthbert became the abbot of Melrose but was always more comfortable in the wild solitude of nature. He often went out to the sea, standing waist-deep in freezing waters to pray. His communing with the natural world was such that it was said that sea otters dried his legs when he finished prayers. He spent eight years as a hermit on the island of Inner Farne and the animals of the island came under his protection.

When the yellow plague hit the land, Cuthbert traveled extensively to minister to victims. Miraculous healings began to be attributed to him, and he was famed as the “Wonder Worker of Britain.” He saw his journeys as a time to not only comfort the afflicted but also to renew their Christian faith.

His adroit handling of church matters and administration were amply displayed in his work at the Synod of Whitby (664), which fixed the date of Easter and aligned the liturgy of the Celtic Church with the liturgy of the Church in Rome. This repair of the breach with Rome demonstrated his gifts for not only healing individuals but also in reconciling groups of people who disagreed vehemently with each other.

His fame for miraculous healings, his competence in ministry, and his kindness in personal relationships caused him to be elevated to the bishopric of Hexham in 684 while still maintaining his see at Lindisfarne. His life was cut short by illness, and he died in 687.

Cuthbert is the most revered saint of the early Anglo-Saxon Church. In honor of his memory, the Gospels of Lindisfarne were commissioned and a church was built to house his relics. Even after his death, he continued to be credited with all manner of healings and miracles such that Bede compiled a collection of the testimonies and penned his famous work on Cuthbert.

Almighty God, you called Cuthbert from following the flock to be a shepherd of your people: Mercifully grant that, as he sought in dangerous and remote places those who had erred and strayed from your ways, so we may seek the indifferent and the lost, and lead them back to you; through Jesus Christ our Lord, who lives and reigns with you and the Holy Spirit, one God, for ever and ever. Amen.