As Lent Madness voting resumes for the week, we encounter Hadewijch and Juan Diego, two outsiders in their own unique ways. In case you're wondering about the pronunciation, Hadewijch rhymes with hate-a-witch (if you're either a Wiccan or from Salem, Massachusetts, please don't get offended).

In the only Saturday match-up of Lent Madness 2015, Molly Brant sent Swithun back to the proverbial swamp 58% to 42%. Molly will face the winner of Bede vs. Cuthbert in the Saintly Sixteen.

Yesterday, in case you missed it (and if you did, you should sign up on the home page to receive e-mails every time we post something), we shared some resources to supplement your Lenten journey. We've invited folks to add others in the comment section, not because we don't have all the answers but because we're lazy. So check out what we're calling "Lent beyond the Madness" and feel free to add to the list. 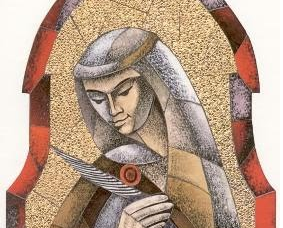 In the early thirteenth century, new expressions of religion began to appear in what are now the modern-day countries of Belgium, Luxembourg, and The Netherlands. The devotions of contemplation and ecstatic mysticism began to be publicly practiced by a group of devout women known as the Beguines. Beguines were not nuns, but women who chose to lead lives of poverty and prayerful contemplation without taking formal vows. Their members were from across all socioeconomic classes; some lived alone, and others formed small groups.

Hadewijch was among these devout women. Other than her devotion as a Beguine, almost nothing is known of her life. What we do know has been distilled from her writings—collections of poetry, letters, and visions. Her writings show a proficiency in Latin and French, with a vast knowledge of both the Old and New Testaments and early Church writers, especially Saint Augustine of Hippo.

While almost nothing is known directly about her that can be pinned down as historical fact, her use of the images of courtly love to describe our relationship with God suggests she was nobility. She took common images of her day—love offered to a lady by a knight, the knight facing dangers to win the love of a woman, the elegant dance of honor, expressions of love, the trials faced to win the love and affection of the beloved — and used the tension, seduction, and longing particular to courtly love to express the relationship between the soul and God. Her poetry brought a holy sensuality to the usually dry theological writings of the time, which were also rife with superstition and threats of eternal damnation.

Her use of courtly love and eroticism to speak of our relationship with God did not find support in the traditional church hierarchy or in the Beguine community. From the content of letters and visions, scholars believe Hadewijch was evicted from her community and perhaps imprisoned for her expression of faith and belief. Other letters indicate she lived her last years homeless, serving the sick and dying in hospitals where she could care for those in need, sleep in a corner when possible, and pray in a chapel.

Loving God, we thank you this day for the ministry and mystical experiences of your servant Hedewijch. Grant that we might each discover a language of love to speak to you, and to our brothers and sisters in faith. Give us grace to speak of love and out of love daily, to you and to the world, not counting the cost or considering the risks of speaking and loving boldly, knowing that your love perfects our imperfections, and that mercy and grace cover a multitude of shortcomings. Amen. 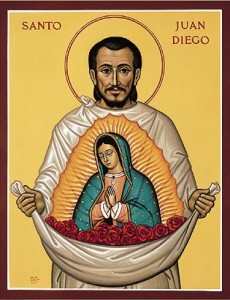 Juan Diego is the first Roman Catholic indigenous American saint. Born in 1474 with the name “Cuauhtlatoatzin” (“the talking eagle”), Juan Diego was a member of the Chichimeca people and lived a simple life as a weaver, farmer, and laborer. When he was fifty years old, he and his wife were among the first indigenous people in the former Aztec Empire to accept baptism and convert to Christianity.

According to tradition, on December 9, 1531, Juan Diego rose before dawn to walk fifteen miles to mass. As he passed the hill of Tepeyac, he heard a woman’s voice call him to the top of the hill. There, he saw a beautiful young woman dressed like an Aztec princess. She said she was the Virgin Mary and asked him to tell the Bishop of Tepeyac to build a church on that site in her honor.

The bishop was skeptical of Juan Diego and demanded proof of the Lady’s identity. On December 12, Juan Diego returned to Tepeyac and asked the Virgin Mary for proof. She told him to climb the hill and to pick the flowers that he would find in bloom. He obeyed, and although it was wintertime, he found roses blooming in the frozen soil. He gathered them in his tilma (cloak) and took them to the bishop. When Juan Diego opened his tilma, dozens of roses fell out. An image of Mary, imprinted on the inside of his cloak, became visible. Having received this proof, the bishop ordered that a church be built on Tepeyac in honor of the Virgin and thousands converted to Christianity.

This was the first Marian apparition in the New World. Additionally, Mary spoke to Juan Diego in Nahua, the Aztec mother tongue. The familiar language and comforting words of Our Lady still prompt thousands of converts to declare their faith in Jesus and love for Mary; this devotion can be seen and felt throughout much of Latin America, including roadside shrines and icons in bodegas, restaurants, and households from South Texas to Tierra Del Fuego.

Juan Diego died on May 30, 1548, at the age of seventy-four and was buried in the first chapel dedicated to the Virgin of Guadalupe. Pope John Paul II praised Juan Diego for his simple faith and offered him as a model of humility for all Christians. On May 6, 1990, Juan Diego was beatified by Pope John Paul II in the Basilica of Santa Maria de Guadalupe, Mexico City.

Almighty God, you love the least of us and reveal your glor y and blessings to those simple and seeking souls who desire the warmth and vision only you can provide.We thank you for the life and ministry of Juan Diego, who, inspired by a vision of The Blessed Virgin, helped to spread the story of Jesus’ redeeming love throughout his community and into the New World. For the beauty of roses in winter, for comforting words in our own tongue, and the grace to spread the life-changing message of the Gospel, we thank you. Amen.

186 comments on “Hadewijch vs. Juan Diego”