Teresa of Avila vs. David Oakerhater

Today's match-up between Teresa of Avila and David Oakerhater is Lent Madness at its confounding best. A 16th century Spanish mystic vs. a 19th century Native American deacon. How can you possibly compare these saintly apples and oranges? Well, that's the challenge you're confronted with on this second day of Lent Madness 2015 and you may as well get used to it.

Don't forget, tomorrow is the one and only day there will be a Saturday Lent Madness battle. It's a math thing. So Molly Brant will face off against Swithun. In case you were wondering about the timing, these match-ups are always posted at 8:00 am EST and the polls are open for 24 hours.

Remember to vote only once. The SEC is vigilant about multiple voting (Scott used to work for IBM so he can zap votes if necessary and Tim, well, he has two teenage sons so he has at-home tech support). Voter fraud is a sin. Don't be cast into the outer darkness of Lent Madness where we guarantee there will be weeping and gnashing of teeth! And perhaps even public humiliation. If you will be casting multiple votes from a location because you're at a school or other institution, just let us know in advance. Also, you'll be glad to know that we keep Jimmy Carter on retainer to insure safe, honest, and open elections.

In yesterday's battle, Brendan navigated his way to a comfortable victory against Gregory the Illuminator 61% to 39% and will face the winner of John Keble vs. Thecla in the Round of the Saintly Sixteen. It was an historic day at Lent Madness as voting totals were at an all-time high with 7,800 votes cast. We also shattered the previous record for website page views in a single day with 38,000. So, in a fleeting moment of humility, we thank you all.

For an updated bracket and links to past rounds, click the Bracket 2015 tab on the Lent Madness homepage. Bracket Czar Adam Thomas updates it every day for your clicking pleasure.

Oh, and if you can't get enough of the Madness? Check out Scott's interview with Fr. Benjamin Gildas on the podcast Priest Pulse. And tune in to hear Tim talking about Lent Madness on Boston Public Radio today at 12:20 pm (Live radio! Could be a train wreck!). 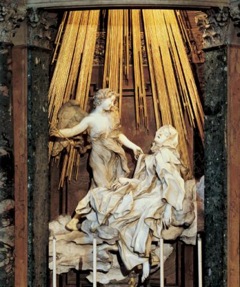 Not many seven-year-olds run away to accept martyrdom among the Moors, but not many children grow up to become a Doctor of the Church, either. Teresa de Cepeda y Ahumada, known as Teresa of Avila, was born in 1515 to a wealthy Spanish family.

When her mother died, she found solace in intense devotion to the Blessed Virgin Mary. Like many young girls of her age, she was also passionate about romance novels and fashion. Fearful that her love of earthly things would condemn her soul to eternal hell, she sought redemption through education in an Augustinian convent.

In 1538 she began to suffer from a chronic illness that affected her for years. During her illness, she experienced visions and revelations. Upon her recovery, she entered a Carmelite convent where she fell into the lax convent life — social visits of wealthy patrons were better attended than prayers. Teresa recommitted herself to a life of prayer and began to experience visions and interior messages from God. Fearful that her visions might be of the devil, Teresa consulted with others in discernment. One priest told her no woman with a life so full of imperfections could receive divine messages.

Fortunately, Teresa received wiser insight and finally embraced her visions, which began to involve raptures and levitation. One of her raptures was the inspiration for Bernini’s (some would say scandalous) sculpture The Ecstasy of Saint Teresa. She wrote of the moment in her autobiography: “I saw...a long spear of gold, and at the iron’s point there seemed to be a little fire. He appeared to me to be thrusting it at times into my heart, and to pierce my very entrails; when he drew it out, he seemed to draw them out also, and to leave me all on fire with a great love of God. The pain was so great, that it made me moan; and yet so surpassing was the sweetness of this excessive pain, that I could not wish to be rid of it.”

If Teresa had contributed nothing but her writings, she would have given the Church a gracious plenty. However, she was also a reformer for the Carmelite order. Her reformed order, often called discalced because they wore sandals or went barefoot, demanded dedicated prayer, devotion, and silence. Her reforms were not without controversy, but she persevered and founded seventeen reformed convents.

Teresa’s life is a model of one who, through addition and subtraction, leaves us with a legacy of deep prayer, mysticism, and a shining example of dedication to God.

Collect for Teresa of Avila

O God, by your Holy Spirit you moved Teresa of Avila to manifest to your Church the way of perfection: Grant us, we pray, to be nourished by her excellent teaching, and enkindle within us a keen and unquenchable longing for true holiness; through Jesus Christ, the joy of loving hearts, who with you and the Holy Spirit lives and reigns, one God, for ever and ever. Amen.

David Pendleton Oakerhater was a Cheyenne Indian of Oklahoma, a warrior who fought for Native American rights and land against an encroaching American government. He also was a U.S. Army prisoner, an artist, an Episcopal deacon, and the first Native American saint in the Church.

Born in the 1840s in what is now Oklahoma, Oakerhater was raised in the Cheyenne traditions. He joined his tribe in conflicts and was captured and imprisoned in a Florida fort.

Conditions in the prison were difficult at best, but Oakerhater persevered and emerged as a leader of his friends. Eventually, circumstances improved. While in prison, Oakerhater and his companions received an education, learning English and art techniques. His works captured the eye of Alice Key Pendleton of Cincinnati, Ohio, and she became his benefactor.

During his incarceration, Oakerhater embraced Christianity. Sponsored by the Episcopal Diocese of Central New York and with financial assistance from Mrs. Pendleton, he and three other prisoners traveled north to study the faith. He was baptized and confirmed in Syracuse, NewYork, in 1878, and took the name David Pendleton Oakerhater in honor of the Old Testament King David and his benefactress. Soon after his ordination to the diaconate in 1881, Oakerhater returned to his homeland in Oklahoma.

Oakerhater’s ministry blossomed in Oklahoma with the launching of schools and the founding of missions; this was often without the support of the Church and with resistance by the U.S. government. He was tireless in his ministry, never stopping until his death on August 31, 1931. He also continued in his art and is considered one of the founders of modern Native American art.

In 1985 Oakerhater was the first Native American to be included in Lesser Feasts and Fasts, the Episcopal Church's book of saintly commemorations where he is honored on September 1. On that date in 1986, services at Washington National Cathedral in Washington, D.C., were the first to honor him, with his descendants and delegations from Oklahoma invited to the celebration.

Oakerhater is depicted in many windows and churches. St. Paul’s Cathedral in Oklahoma City dedicated a chapel to the saint, replacing a window that had been destroyed in the 1995 Oklahoma City bombing. The window has a reproduction of Oakerhater’s glyph signature, which loosely translates to Oakerhater’s Cheyenne name,“Making Medicine.”

O God of unsearchable wisdom and infinite mercy, you chose a captive warrior, David Oakerhater, to be your servant, and sent him to be a missionary to his own people, and to exercise the office of a deacon among them: Liberate us, who commemorate him today, from bondage to self, and empower us for service to you and to the neighbors you have given us; through Jesus Christ, the captain of our salvation; who lives and reigns with you and the Holy Spirit, one God, for ever and ever. Amen.

Teresa of Avila vs. David Oakerhater