In the final battle of a week filled with saintly thrills and spills, Balthazar squares off against Cecilia. And you, yes YOU, get to decide whether to vote against Christmas pageants or against church choirs. So good luck with that. Actually, both saints have inspired many people over the generations -- from those who love frankincense, to those who are allergic to it; from those with melodic voices to the tone deaf.

Yesterday's hotly contested battle between Egeria and Hildegard of Bingen ended with the bracket-busting Egeria edging out Hildegard by the slimmest of margins, 51% to 49%. With almost 6,800 votes cast, Egeria prevailed by less than 140. See, your (single) vote counts!

While we've had our share of nail biters over the years, this ranks up there and was the first truly close battle of Lent Madness 2015. And the comments. The comments! We set a record for most comments ever with nearly 370. Kudos to the commenters! 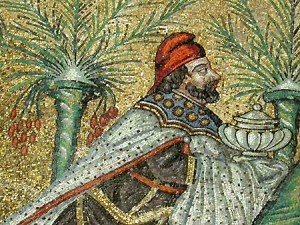 The story of the Three Wise Men is a beloved part of Christmas crèches and pageants, albeit exercising a bit of editorial license. In Matthew’s Gospel, the text only says that sages and magi traveled from the East to find the infant King — not how many there were or what their names were.

Nonetheless, over time, tradition has narrowed the number of the Eastern travelers down to three and assigned them names — one of which is Balthazar. (In many medieval depictions of the Wise Men, Balthazar is depicted as a young African man). Aside from his presence in Matthew’s story, we don’t know much about Balthazar. He’s a mysterious figure, along with Melchior and Caspar, the other two kings named by tradition. The story goes that they brought frankincense, myrrh, and gold to the baby, carried all the way from the distant lands of Africa, Asia, and Europe.The kings were warned in a dream not to return to the genocidal King Herod, so they headed for home by a different path.

At some point, Balthazar and the other kings were martyred and buried, but we aren’t quite sure where. The explorer Marco Polo thought they were near Tehran, while Saint Helena thought she had found them in Palestine, along with the true cross, and brought everything with her to be enshrined at the Hagia Sophia. When Constantinople fell, the kings were moved to Milan, then Germany. You can now see what are believed to be Balthazar’s bones at a cathedral in Cologne, Germany.

But here is where the story gets really good.

It’s easy to dismiss Balthazar’s story as medieval hagiographic fan fiction. Yet alongside these Western Christian stories ran traditions from within Ethiopia and within Central and Southeast Asia, which traced their Christianity back to the return from Bethlehem of theWise Men. In 1243, Sempad, the elder brother of the Armenian king wrote a letter to his sister, Queen Stephanie of Cyprus, saying “Tanchat [Tangut, or Western Xia], which is the land from whence came the Three Kings to Bethlem [sic] to worship the Lord Jesus which was born. And know that the power of Christ has been, and is, so great, that the people of that land are Christians; and the whole land of Chata [Khitai, or Kara-Khitai] believes those Three Kings. I have myself been in their churches and have seen pictures of Jesus Christ and the Three Kings, one offering gold, the second frankincense, and the third myrrh. And it is through those Three Kings that they believe in Christ, and that the Chan and his people have now become Christians.”

At the time of Christ, the trade routes of present-day India, China, Egypt, and Ethiopia, all flowed through Jerusalem, so it’s not unreasonable to imagine that a curious young trader heard of an unusual baby, grabbed some friends, and decided to go investigate.

What is clear, however, is that his investigations, and the fruit of his travels, changed the world.

Collect for Balthazaar
Lord God, you set the stars in motion and give us wisdom. Bless us this day with the curiosity of Balthazar, that we would seek your will and know your ways, even as those signs pointing toward them would lead us over and beyond the horizons of familiarity. Make us restless to seek your face and your kingdom, knowing that resting in your knowledge and love is to truly come home. Bless all those who travel, and all those who seek the truth as part of their journey. Amen. 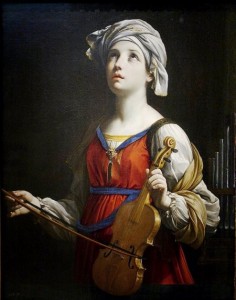 Cecilia is the patron saint of singers, musicians, and poets. She was martyred in Rome in the third century. Finding historically factual information regarding her life is a real heartbreaker and can shake the confidence of even the most devoted researcher.

Nevertheless, it is believed that Cecilia was born into nobility and privilege. She was a woman of strong faith and was credited with converting four hundred people. She was married to a pagan named Valerian. With Cecilia’s faith as a living example, Valerian and his brother Tiburtius, along with Maximus, a Roman soldier, were converted. After their baptism, the two brothers devoted themselves to burying the martyrs who were being slain daily. In about 230 CE, the brothers were arrested for practicing their faith. They were executed—and while she was burying her husband and brother-in-law, Cecilia was arrested.

There were several unsuccessful efforts to slay Cecilia, including stabbing, suffocation, and attempts at beheading, but she clung to life. After three days, she died as a result of the injuries.

Many reports tell of Cecilia’s courage and unfailing faith, revealing that she sang praises to God throughout her torment and slow death, hence her musical connection.

Cecilia is among the most famous and honored of the Roman martyrs. Since at least the fifth century, a church named in her honor has been located on the site of ruins believed to have been her home.

Cecilia is widely depicted in art, from paintings and sculptures to stained glass and mosaics and of course, music. Musical works by the greats — Handel, Purcell, Gounod, and Britten, and even contemporary artists such as Paul Simon, The Andrews Sisters, and Blue Oyster Cult, draw on Cecilia’s life and legacy as part of their own expressions. John Dryden, Alexander Pope, and W. H. Auden are among the great poets whose works honor Cecilia. Musical societies and choirs are also frequently named in her honor, including the National Academy of Saint Cecilia. In some places, concerts are presented on her feast day, which is November 22.

Collect for Cecilia
Most gracious God, whose blessed martyr Cecilia sang in her heart to strengthen her witness to you: We give you thanks for the makers of music whom you have gifted with Pentecostal fire; and we pray that we may join with them in creation’s song of praise until at the last, with Cecilia and all your saints, we come to share in the song of those redeemed by our Savior Jesus Christ; who with you and the Holy Spirit lives and reigns, one God, in glory everlasting. Amen.

225 comments on “Balthazar vs. Cecilia”