Bernard Mizeki vs. Margaret of Antioch

In the penultimate battle of the first round, we have a South African missionary and martyr taking on an early 4th century martyr from Antioch. Courage (and at least one dragon) abounds in this battle between Bernard Mizeki and Margaret of Antioch with the winner to face Jackson Kemper in the Saintly Sixteen.

Yesterday in the Battle of the Greats, Dionysius the Great proved his greatness by defeating Irene the Great, 58% to 42%. Wondering how things are progressing? Check out the updated Bracket.

And in case you missed this week's stirring edition of Monday Madness: Global Edition, Tim and Scott awarded the first ever Lent Madness Medal of Valor. Oh, and they also coined the term "Servermaggedon." 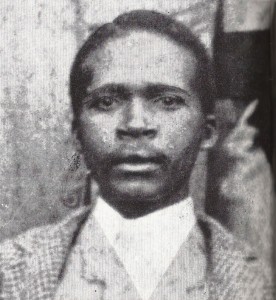 Bernard Mizeki is one of the most beloved martyrs in South Africa. Each year on June 18, one of the largest Christian gatherings in Africa takes place as part of the celebration of his feast day.

Born in Portuguese East Africa in 1861 and educated by the Cowley Fathers, Mizeki began his working life offering hospitality in the Fathers' Hostel for African men. Under their tutelage and with the additional evangelical efforts of a German missionary, Mizeki was baptized in 1886. Shortly after, he left his job at the hostel and began his training as a catechist.

Mizeki’s calling as a catechist and his innate gift for language made him a natural fit as a partner to missionaries working in what is now known as Zimbabwe. He and his wife provided pastoral care and formation to the people in and around the Marondera district, taking special care to explain the Christian faith in ways that used the indigenous culture to undergird the primacy of the gospel of Jesus. Mizeki understood the importance of respecting cultural integrity and had an ardent desire to preach the good news.

In a decision repeated by Martin Luther King, Jr. more than fifty years later, Mizeki refused to allow death threats and intimidation from local authorities to keep him silent. Mizeki was truly a shepherd to his sheep until the end of his life. During an 1896 uprising, Mizeki was attacked outside of his hut. In an effort to staunch his wounds and give him comfort, his wife and a friend ran back into the dwelling to retrieve food and blankets. Reporting a bright flash of light and a sound like many beating wings, the two helpers were unable to find Bernard’s body on returning to the spot where he had fallen. While his final resting place remains unknown, Bernard Mizeki’s faith and trust in the love and life of Jesus is unmistakable.

Almighty and everlasting God, who kindled the flame of your love in the heart of your holy martyr Bernard Mizeki: Grant to us, your humble servants, a like faith and power of love, that we who rejoice in his triumph may profit by his example; through Jesus Christ our Lord, who lives and reigns with you and the Holy Spirit, one God, for ever and ever. Amen. 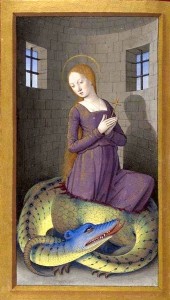 Margaret of Antioch is one of the Auxiliary Saints, the so-called “Fourteen Holy Helpers.” She was a victim of the Diocletian Persecution (302-303). In her story she was true to her name (margarites means pearl in Greek): shining, resplendent Margaret was a small but powerful woman. She is the patron saint of expectant mothers and was one of the holy personages said to have provided comfort, solace, and direction to Joan of Arc.

Born to a prominent pagan family in Antioch, Margaret’s father gave her to a nurse to be brought up as a proper lady. When Margaret was old enough to decide for herself, she was baptized as a Christian. Sometime later, when she was fifteen, a local prefect saw her and wanted her as his wife. Upon further inspection, he learned of her noble parentage and her apt name. He also learned of her Christian faith. The prefect expressed his disapproval for her religion, and Margaret likewise condemned him for not believing in the crucified Christ. This angered the prefect and he had her thrown in jail.

The next morning, Margaret was ordered to offer sacrifices to the prefect’s gods. Margaret refused and dared the prefect to follow through on his threat to torture her. He carried through — Margaret was placed on the rack, beaten with rods, and cut with iron rakes. The violence was so disturbing the prefect could not bear to watch.

Margaret was taken off the rack and sent back to jail. That night she battled a great dragon (thus a dragon is often included in artistic depictions of her). In some versions of her story, she fended off the dragon by making a sign of the cross. In other stories the dragon consumed her whole, and while in its belly Margaret made the sign of the cross and the dragon burst open, providing us with one of the most lasting and impressive stories about intestinal upset upon being confronted with the truth of the gospel and zeal of the faithful. Upon vanquishing the dragon, she faced off with the devil, appearing to her in the form of a man. Margaret grabbed the man by the head, shoved him to the ground, and pinned him under her feet. Knowing that she had vanquished the devil, she confidently approached the prefect the next day.

In front of a large crowd, Margaret refused to make sacrifices to the gods. She was stripped and her body was burned with torches. She was bound and placed in a tub of water to increase the pain. Immediately the earth shook, and Margaret emerged from the water unscathed. Five thousand people saw the miracle and immediately converted to Christianity. Fearing more people would convert, the prefect ordered her beheaded. Margaret died with a single stroke of the blade.

Collect for Margaret of Antioch

Everliving God, we remember before you today your servant Margaret of Antioch, who, though small and delicate in stature has become a giant of the faith. Grant that we, like Margaret, would have the faith and fortitude to cling to your love and solace, even in the midst of humiliation and great pain, so that we may always proclaim the words of your story and the faith of your church to encourage those around us in our darkest hours. Amen.

Bernard Mizeki vs. Margaret of Antioch

175 comments on “Bernard Mizeki vs. Margaret of Antioch”