Brigid of Kildare vs. Dionysius the Great

We've almost made it through yet another week of heart-stopping, saintly thrills and spills. Two more votes to cast before we're given a chance to catch our collective breaths/suffer from the weekend malaise that is LMW (Lent Madness Withdrawal).

After today's matchup, only two battles remain in the Round of the Saintly Sixteen. Tomorrow Bernard Mizeki will face Jackson Kemper and on Monday it's Egeria vs. Thomas Ken. Then it's on to the Elate Eight!

But before we get ahead of ourselves, let's focus on a tricky pairing between a beloved Irish saint and a bishop who served amid the trials of persecution. Brigid of Kildare faces Dionysius the Great as we continue to get to know our saintly souls through Quirks and Quotes.

Yesterday, Francis of Assisi trounced Cecilia 69% to 31% and will face off against Thecla in the next round.

Brigid is the most-beloved Irish saint, alongside Patrick, in the hearts of the Irish people.

Known as Mary of the Gael, she is said to have miraculous powers over beer: both changing a bathtub full of water to beer to feed a starving family, and causing a single barrel of her monastery’s brew to last from Christmas straight through to Pentecost.

However, she didn’t limit her exploits to mass beer production — Brigid was a shrewd leader as well. Her double monastery was the first of its kind. When she went to the king, to request land to build her abbey, she explained that she had just the right spot picked out: it had trees, access to water, good for building, a lovely view, etc. The king flatly refused. Undeterred, Brigid suggested the king give to her just enough land as her cloak covered. The king, eyeing the small garment wrapped around her shoulders, shrugged and agreed. Brigid spread out her cloak, handing each corner to a different nun, and they started walked in opposite directions. Suddenly, the cloak grew larger and larger, until the king, annoyed, threw up his hands, and gave her the original parcel she had wanted. The idea of Brigid’s cloak became very important, and to this day, a popular Irish blessing asks for St. Brigid to shelter you under her cloak.

On a slightly more practical note, when St. Mel of Armaugh performed her installation as abbess of Kildare, he reported seeing a column of fire descend from the heavens and alight upon Brigid’s head. This vision convinced him, on the spur of the moment to just go ahead and ordain her a bishop. (Columns of fire from heaven are not to be trifled with). Vision or no, Brigid is considered by many to be the first functioning female bishop, and is depicted holding a bishop’s crozier in many icons.

Her ministry, in Kildare and beyond, was based on translating the incoming Christian faith into the language of the people’s traditional customs and practices, until it became something they could relate to.

The monastery at Kildare was founded on a site that had been traditionally used for Druid worship of a pagan goddess. Worship of this goddess involved the kindling and tending of an eternal flame. Once Brigid decided to set up her monastery there, she elected to continue to let the flame burn — only she explained it as the light of Christ, shining in the world, and coming to Ireland to bring wisdom, peace, and justice. Each day, a different nun would tend the light, and on the 20th day, Brigid herself took a turn. So the flame burned continuously, as it had in pre-Christian days, until Henry VIII destroyed the monasteries.

However, in 1993, the order Brigid founded relit the flame in Kildare, and it is again shining continuously as a beacon of Christ’s love in Ireland. 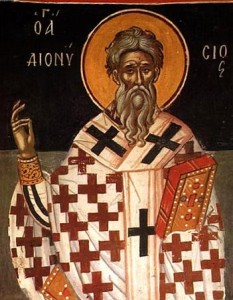 Dionysius the Great, as he would come to be called, was an agent of reconciliation in a time of heated dispute. As Bishop of Alexandria, the chief episcopal see in the third century, Dionysius saw his flock subjected to the horrors of the Decian persecutions and is remembered especially for his role in the question of how to treat those Christians who had lapsed during the persecutions.

Many fled Alexandria seeking safety, others went to their reward loyal to the faith, and yet others gave in to the pressures of the Roman Empire and apostatized. Dionysius himself was furious when he was not allowed to go to his martyrdom after he was kidnapped by supporters who could not bear to see him become a victim.

Once the persecutions came to an end, there were many who were of the opinion that there was no possibility for re-admission to Communion and the Church after such apostasies. Dionysius, however, offered a way toward reconciliation. He said that, after a period of penance and without re-baptism, those who had succumbed to pressure should be welcomed back. He wrote, “Let us then not repel those who return, but gladly welcome them and number them with those who have not strayed…”

He said of those who would bar those who apostatized from the Communion of the Church that they had “introduced the most unholy teaching about God and accuse the most gracious Jesus Christ our Lord of being without pity.”

Dionysius reinforced the teaching that the Sacraments of the Church are of Divine origin and that the flawed nature of the Church’s ministers does not undermine their efficacy. He combated with great vigor those who maintained that if a heretic baptized an individual then said Baptism might be considered invalid. Dionysius taught that Baptism in the name of the Trinity should always be regarded as valid no matter the failings of the minister.

Dionysius maintained a moderate tone and appealed to scripture, tradition, and reason in holding that the unity of the Church rests on the validity of her Sacraments despite the flaws, divisions, and animosities of the Church.

One man who had taken in with heretics for a time came to Dionysius full of contrition and afraid to receive Communion without being re-baptized. About this Dionysius wrote, “For as he had heard the Giving of Thanks (Eucharist), and joined in saying the Amen, and stood at the Table, and stretched forth his hands to receive the holy Food, and had taken it and partaken of the Body and Blood of our Lord Jesus Christ for a considerable period, I should not venture to put him back to the beginning once more.”

Dionysius was a writer, thinker, and teacher who, at a time of bitter controversy, labored for the unity of the Church and rested his hope on the mercy and charity of Christ.

Brigid of Kildare vs. Dionysius the Great

168 comments on “Brigid of Kildare vs. Dionysius the Great”