A choice between two women today, one from 5th century Ireland and the other from Biblical times. Brigid of Kildare, whose theme song, based on her penchant for giving material possessions to the needy, may well be the Red Hot Chili Peppers' "Give it Away Now" faces Elizabeth, the mother of John the Baptist, whose theme song would presumably be that early hit known as the Hail Mary.

In yesterday's Madness, Francis of Assisi stormed to victory over John Wycliffe 66% to 34% and will face the winner of Balthazar vs. Cecilia in the next round.

In case you missed yesterday's edition of Monday Madness you can catch it here. Then readjust your Lenten priorities to insure you never again miss Tim and Scott's hard-hitting commentary.

Brigid was born into slavery in 453 CE in what is now known as Ireland. She was born out of wedlock to a Druid high priest named Dubhtacht and an enslaved woman named Brocca. Dubhtacht promptly sold Brigid off, since he was hoping for a boy.

This plan didn’t work; Brigid arrived back at her father’s house when she came of age — and had freshly converted to Christianity as well. (Saint Patrick was already active in Ireland by this point, so her conversion was not surprising, but it really annoyed her father).

What further irked her father was Brigid’s practice of giving away every single thing in his house to any impoverished person who asked. Food, clothing, silver — Brigid gave it away without a second thought in order to aid the poor who flocked to her generous spirit. When Brigid gave away his jewel-encrusted sword, her father reached the end of his rope and was determined to sell her to the king.

The king didn’t share Dubhtacht’s frustration — and as he was convinced that she was a holy person, the king promptly gave Brigid her freedom.

Brigid had one goal in mind. She marched across Ireland, from Leinster to Connaught, to find and buy her mother’s freedom. After this, Brigid became a nun, and established a monastery at Kildare, where she lived for the rest of her life.

The Kildare monastery was a double monastery —meaning men and women monastics lived together — and Brigid was the abbess over both houses. It was the first such establishment, but others soon followed throughout the Celtic countryside. As abbess,Brigid was sought out for her advice and counsel, and Kildare became a great cathedral city in Ireland and a center for the arts, learning, and spirituality.

Ever the consummate hostess, many of the miracles associated with Brigid had to do with food — especially dairy foods. Her cows were rumored to give milk three times a day. In one of the most mystical stories of Brigid’s life, we find her miraculously whisked through time and space to be the midwife to Mary and wet nurse to baby Jesus. It’s easy to see why Brigid is celebrated as the patron to both dairy farmers and lactating women.

Brigid was known for being wise and generous and good at explaining the gospel in the people’s language and culture. Legend has it that she went to visit a dying man who was out of his mind with fever. She sat beside him to console him, and as she sat, she started weaving together rushes from the floor into a cross shape. The man saw what she was doing and asked what the cross meant. She explained it, and the man was moved to ask for baptism. To this day, Saint Brigid’s cross is omnipresent in Ireland.

Brigid died at Kildare in 525 CE, but her life and her presence echo still across Ireland and throughout the world today.

Collect for Brigid of Kildare

Everliving God, we rejoice today in the fellowship of your blessed servant Brigid, and we give you thanks for her life of devoted service. Inspire us with life and light, and give us perseverance to serve you all our days; through Jesus Christ our Lord, who with you and the Holy Spirit lives and reigns, one God, for ever and ever. Amen. 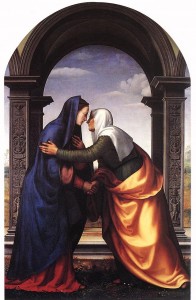 We are introduced to Elizabeth, the mother of John the Baptist, in Luke’s Gospel. Elizabeth was said to be a descendant of Aaron, Israel’s first priest. She, like so many of the great mothers of the Jewish faith (for example, Sarah, Rachel, and Hannah), was old and barren. Luke is clear that her sterility was not on account of impiety; she was described as “righteous before God” and said to live “blamelessly according to all commandments and regulations of the Lord.”

Her husband Zechariah was serving as priest, offering incense in the temple, when he was informed that Elizabeth would bear a son in her old age. Zechariah expressed disbelief and was rendered mute until the day John the Baptist was presented in the temple. Elizabeth, on the other hand, modeled trust in God’s promises and was rewarded with a pregnancy entirely free of snarky comments about the amount of pita and hummus she consumed.

Elizabeth lived in seclusion for five months until she was visited by her relative, Mary. At Mary’s greeting, the baby leapt in Elizabeth’s womb, leading her to praise Mary proclaiming, “Blessed are you among women, and blessed is the fruit of your womb.” In this moment she acted as prophet, a role her son would take up when he prepared the way of the Lord in the desert. After the boy was born and when he was presented at the temple, since Zechariah was mute, Elizabeth was obedient to God’s command and named her son John. He would later be described by Jesus as “more than a prophet” and that “among those born of women no one is greater than John.”

The Protoevangelium of James narrated how during Herod’s murderous rage, Zechariah was killed for concealing Elizabeth and John. God led Elizabeth to a mountain and miraculously protected her and her young son so that John could grow and fulfill the mission God had prepared for him. Elizabeth, now an elderly widow with a young child, faithfully raised John, who was later recognized not only as a great prophet and the forerunner to the savior but also as a holy figure to be emulated in his own right.

Lord God, we remember before you today Elizabeth, mother of John the Baptist. May we be so convicted of the presence of Jesus that, like her, we would proclaim as blessed those who bear him into the world. Grant that we would have the deep faith and abiding peace to rest in your promises for this life, no matter how incredible those promises seem to us, and to have the grace and will to proclaim those promises to the world, for the sake of Jesus. Amen.

196 comments on “Brigid of Kildare vs. Elizabeth”