Today it's Egeria vs. Hildegard of Bingen. The world's original "Mystery Worshipper" vs. a 12th century renaissance woman. Both have had a major impact upon the Christianity we have inherited, yet only one will advance to the Saintly Sixteen. We're expecting a flurry of comments on this. Let the agonizing over votes begin!

But first, speaking of comments, sometime during yesterday's battle between Jackson Kemper and Margery Kempe, we passed the 20,000 comment milestone on the Lent Madness website. That's a lot of conversation about holy people, don't you think?

Oh, and Kemper trounced Kempe 74% to 26% meaning he'll face the winner of Bernard Mizecki vs. Margaret of Antioch in the Saintly Sixteen. 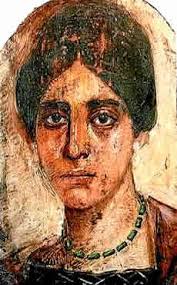 Egeria gives us the earliest glimpse we have into organized Christian practice and belief.

We don’t know much about who she was, exactly. Many say she was a Spanish nun, which makes sense given her unusually high level of literacy — and the way she addressed those she wrote to as sisters. Others point out she must have been an unusual sort of nun, if she was a nun at all. Her letters were detailed and practical, betraying none of the fascination with the miraculous and fanciful that some other clerical pilgrims loved. And what sort of nun was free to travel around the known world for years at a time? Possibly this made her a sort of wandering monastic — additionally unusual for her time. Or maybe she was a very devout noblewoman, called to pilgrimage, who wrote letters home to other devout women at her church.

Egeria traveled across much of the known world during 381-384 CE to Jerusalem, Mount Sinai, Constantinople, and Edessa. Her letters were collected in monasteries and copied, then copied again. They were housed in the library of Monte Cassino, and the oldest surviving copies were made there in the eleventh century.

Egeria recorded everything: she stayed in Jerusalem to witness an entire liturgical year and wrote down the liturgical practices of the local Christians. She described the holy sites on the Mount of Olives and the rituals around Holy Week. She told of the ritual of the eucharist as practiced in Jerusalem, and Egeria applauded the practice of reading from the Old and New Testaments as well as passages from the gospels. She described the process by which catechumens were taught the faith and baptized. It is from Egeria that we know about Holy Week rituals like the veneration of the Cross and the procession of the palms on Palm Sunday. It is also from her that we hear for the first time of the Easter Vigil and lighting of the first fire of Easter.

She described liturgical practice at a time when Christian beliefs were just becoming unified across the known world. Remember, the Second Ecumenical Council met in 384 CE, so Egeria was traveling and writing about liturgical practice before the formalization of the Nicene Creed, much less other traditions of the Church.

Through her bravery, her wandering feet, and her meticulous eye for detail, Egeria connected our liturgical practice with that of our earliest sisters and brothers in Christ.

Jesus, our brother, as we, like Egeria, dare to follow in the steps you trod, be our companion on the way. May our eyes see not only the stones that saw you but the people who walk with you now; may our feet tread not only the path of your pain but the streets of a living city; may our prayers embrace not only the memory of your presence but the flesh and blood who jostle us today. Bless us, with them, and make us long to do justice, to love mercy, and to walk humbly with our God. Amen. 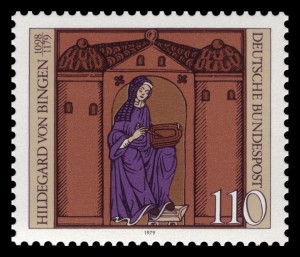 Hildegard of Bingen is one of the most accomplished women in church history. The twelfth-century abbess was a mystic, theologian, composer, cloistered nun, and autodidact who wrote one of the largest bodies of letters to survive from the Middle Ages.

Born into a noble family and sickly from birth, Hildegard experienced visions beginning in early childhood. Perhaps because of them, her family dedicated her to the church; her fellow brides of Christ recognized her gifts for leadership, unanimously voting her abbess.

At the age of forty-two, Hildegard received a divine vision to“write down that which you see and hear.” Hesitant to do so, she resisted and became physically ill. “But I, though I saw and heard these things, refused to write for a long time through doubt and...in the exercise of humility, until, laid low by the scourge of God, I fell upon a bed of sickness; then, compelled at last by many illnesses...I set my hand to the writing.”

Later, she commissioned an ornate manuscript of her writings, including images of her visions. The original was lost in World War II, but its images were preserved in a copy painted in the 1920s. Notably, these theological works contain one of the earliest descriptions of purgatory.

Hildegard’s musical compositions make up one of the largest extant medieval collections in the world. Her medical writings demonstrate her vast experience in the monastery’s herbal garden and infirmary. Physica and Causae et Curae provide a rare view into the practical medicine employed primarily by medieval women. Hildegard believed there was a vital connection between the natural world and human health. Her reputation as a medical writer and healer was used in early arguments for women’s right to attend medical school. Hildegard also invented an alternative mystical language, the Lingua Ignota, perhaps to strengthen the bonds among her nuns, and potentially as a result of all that time she spent in her herb garden.

On September 17, 1179, Hildegard died, and two beams of light were said to shine across the sky and into her room. Her relics are housed in her parish in Eibingen, Germany. In Anglican churches, she is commemorated on the day of her death.

Modern feminist scholars have drawn attention to the way Hildegard strategically belittled herself and other women in her writing, and thus claimed her wisdom had solely divine origin, giving her the authority to speak in a time and place where few women could do so. She also stated that, “woman may be made from man, but no man can be made without a woman.”

In space, the minor planet 898 Hildegard is named for her, which only seems fair, given her astronomical intellect and accomplishments.

God of all times and seasons: Give us grace that we, after the example of thy servant Hildegard, may both know and make known the joy and jubilation of being part of thy creation, and show forth thy glory not only with our lips but in our lives; through Jesus Christ our Savior, who lives and reigns with you and the Holy Spirit, one God, for ever and ever. Amen.

364 comments on “Egeria vs. Hildegard”