Voting will run for 12 hours, from 9:00 am to 9:00 pm Eastern Time with both an online poll and an in-person voting opportunity at the Forward Movement booth on the Convention floor. The winner in this matchup of the Holy C’s will advance to the to-be-determined 2016 Lent Madness bracket. Stay tuned for the announcement of the full bracket on All Brackets Day, November 3rd. We suggest sitting at your computer and hitting “refresh” for the next four months in anticipation of the blessed event.

In honor of all the voting at General Convention, we thought (Hanging) Chad of Lichfield would be a worthy contender to face Clare of Assisi as the Church seeks Clare-ity in its discernment on the issues of the day.

So, friends, the fate of the initial entrant into Lent Madness 2016 rests in your capable voting (once!) hands. We will share the result sometime soon after the live and in-person polls close. Minions have been acquired to tally the results of the paper ballots in a secure, undisclosed location in the salt flats, which will then be added to the online count.

While you wait for the results, perhaps you’ll want to warm up with a cup of coffee from a Francis of Assisi 2015 Golden Halo Winner Coffee Mug or cool down with a pint of your favorite beverage from a Brigid of Kildare 2015 Silver Halo Winner Winner Pint Glass. You may also want to prepare for Lent Madness 2016 by liking us on Facebook or following us on Twitter.

Now, on to the most important vote of the week and a brief foretaste of the Madness that is to come! 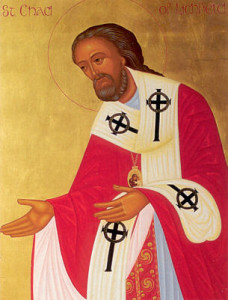 Chad (634-672), a native of Northumbria, was one of four brothers who lived lives in service of the Church. Chad’s eldest brother, Cedd, was Abbot of a large monastery at Lastingham. Upon his brother’s death in 664, the abbacy passed to Chad. The Venerable Bede recounts that Chad was “a holy man, modest in his ways, learned in the Scriptures, and zealous in carrying out their teaching.”

Bede notes that during Wilfrid’s absence, the King of Northumbria became impatient with the vacancy and decided to take further action. Impressed by Chad’s holiness, the King appointed him to take Wilfrid’s place as Bishop of Northumbria. Chad encountered the same problems in tracking down bishops as Wilfrid did; ultimately, he traveled to Wessex, where he was irregularly ordained bishop by two British and one Welsh bishop – none of whom were recognized by Rome. Bede recounts that Chad diligently set himself to the work of administering his see.

Later that same year, the King of Mercia requested a Bishop. Remembering Chad’s example of humility and holiness, Archbishop Theodore recalled Chad from his retirement to Lastingham, and had him re-ordained as a bishop. Chad’s humility was most acutely seen when he refused to use a horse to travel his diocese, preferring to follow the example of the apostles by walking. 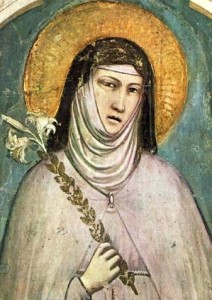 Clare (1194-1253) was born to a wealthy family in Assisi and as a teenager heard a moving sermon by Saint Francis (of Lent Madness 2016 Golden Halo fame).

Much to the chagrin of her family, at the age of 18 she decided to take a vow of poverty and follow a Franciscan lifestyle. Her family brought her back by force but she slipped out again and entered a nearby convent of Benedictine sisters. Soon enough Francis gave her and several other nuns both a rule of life and a dwelling built next to the church in San Damiano. They became known as the “Poor Ladies of San Damiano,” living a life of poverty, prayer, and seclusion. In time, two of her sisters, her widowed mother, and several close friends also joined the order.

These female Franciscans came to be known as Poor Clares and Francis himself named Clare the Superior. The Poor Clares devoted themselves to prayer and caring for the sick, needy, and marginalized. They also lived a life of extreme poverty — beyond what other female orders had ever experienced. They lived a life of complete poverty individually and collectively; they had no beds beyond piles of twigs, they engaged in hard labor, and begged for whatever food they ate.

Clare stood up to various ecclesiastical authorities seeking to impose a less severe rule upon her order. Her strength of conviction defied the norms of female religious orders in the same way Francis faced criticism for his strict and passionate observe of his own faith.

Clare and Francis have been linked by their friendship and dedication to the Gospel of Christ. During her lifetime some even referred to her as alter Franciscus, or “another Francis.” Clare tended to Francis during his old age and considered him always her spiritual father.

Clare died in 1253 at the age of 59 and her remains are kept in the Basilica of St. Clare in Assisi. Ten years after her death the order she led became known as the Order of Saint Clare.

Chad of Lichfield vs. Clare of Assisi