February 22, 2016
Supreme Executive Committee
268 Comments
Congratulations! You have officially survived your first full weekend without saintly voting. Veterans of this online devotion know well the desperate void that comes during the weekends of Lent, which is why there is even an official diagnosis for this phenomenon: Lent Madness Withdrawal (aka LMW). This is precisely why the Supreme Executive Committee, in its infinite pastoral sensitivity, shared 10 Tips to Surviving LMW.
So, while we may all dread the effects of yet another weekend filled with LMW, in the meantime we have a full five days of saintly bliss stretching out before us! We begin today with Columba taking on Kateri Tekakwitha, a well-known saint vs. one perhaps new to many. Away we go!

Born in 521 CE to Fedlimid and Eithne in what is now County Donegal, Ireland, Columba was privileged to receive a first-rate education. His first studies were with Saint Finnian. Then he went to study at Clonard Abbey, and from this base, Columba and other missionaries traveled around Ireland to set up other monasteries that became famous, including ones at Kells, Derry, and Swords.

In 560, trouble struck. Columba ran afoul of his superiors in the monastery over a psalter. Columba adored books, and upon discovering a gorgeous copy of the psalms, decided to make a copy for himself in secret. Saint Finnian objected to this. Behold, the first recorded copyright dispute in monastic publishing!

The argument escalated until there resulted an actual pitched battle known as the Battle of Cul Dreimhe, in Sligo. Many monks were killed. Soon after, Columba ran afoul of the king. A neighboring royal, Prince Curnan of Connaught, fatally wounded the king’s relative in a hunting accident. Prince Curnan was a cousin to Columba, and he sought sanctuary at the abbey from the angry king. The king, however, ignored this long-honored custom, stormed the abbey, and killed the prince. Infuriated, Columba summoned his clan (Clan Niall, of the bloody Nine Hostages-fame) and urged them to rebel against the king. Many died, including several brother-monks, and Columba realized his life had taken a wrong turn.

As penance, he agreed to exile himself. He sailed away, landing at the island of Iona in 563. There, he built a monastery, which has become a famous and  oft-traveled site for pilgrimages. From Iona, Columba launched many missionary journeys into Scotland, establishing churches and monasteries as far away as Aberdeen and Inverness. According to legend, Columba even preached to and converted the Loch Ness monster. He died in 597, at home at Iona. According to his biographer, Columba’s last act was to put down the manuscript he had been copying, after he wrote out, “They that love the Lord shall lack no good thing,” and he remarked, “I must stop here. Let Baithain do the rest.” And so, he died—a book lover to the end.

Collect for Columba
O God, by the preaching of your blessed servant Columba you caused the light of the Gospel to shine in Scotland: Grant, we pray, that, having his life and labors in remembrance, we may show forth our thankfulness to you by following the example of his zeal and patience; through Jesus Christ our Lord, who lives and reigns with you and the Holy Spirit, one God, for ever and ever. Amen. 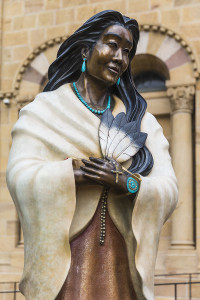 Born in 1656 near Auriesville, New York, Kateri Tekakwitha was the daughter of a Mohawk chief and a Roman Catholic Algonquin woman. Named Tekakwitha, which means, “She who bumps into things,” she had a childhood bout with smallpox that left her with permanent facial scars and diminished eyesight. Known as the Lily of the Mohawks and the Flower of the Algonquians, Tekakwitha was among the first Native Americans canonized by the Roman Catholic Church.

Her life changed in 1675 when she met Jesuit Father Jacques de Lambertville. She sought an education in Christianity, and she converted to the Roman Catholic faith and was baptized on Easter Day in 1676. She took the name Kateri for Saint Catherine of Sienna and declared a lifelong vow of virginity. Tekakwitha’s family continued to shun her: first for her disfigurement, and then for her adherence to Christianity. In 1677 she took up residence at the Jesuit mission just south of Montreal. There, she prayed tirelessly for the conversion of her people and undertook many forms of penance in the development of her personal piety. Although she didn’t have access to formalized convent life or instruction regarding holy orders, she and her mentor, Anastasia, her close friend, Marie-Therese, and several other young women committed to practicing their faith together as a community.

On Wednesday, April17, 1680, at twenty-four-years-old, Kateri Tekakwitha died during Holy Week. She is believed to have uttered as her last words, “Jesus, Mary, I love you.” It was reported that in death, her smallpox scars disappeared. The cause for her sainthood was initiated in 1884, by Roman Catholics living in Canada. Pope Benedict XVI canonized her on October 21, 2012.

Four US shrines honor Tekakwitha, and numerous churches, schools, and institutions are named for her in the United States and Canada.

Collect for Kateri Tekakwitha
God of grace and glory, your beauty fills the whole of creation, calling lilies to bloom and mountains to bow. Thank you for the life of Kateri Tekakwitha, the Lily of the Mohawks, who was called to live a life set apart, devoted to penitence and prayer. Create in us a willingness to examine our hearts and be transformed by your love. Amen.

At 11:02 p.m. EST, two addresses in Vermillion, SD and Medford, OR were blocked. 125 votes for Kateri Tekakwitha were recorded from these two locations, and we do not know of groups participating in Lent Madness in those cities. Not enough votes were cast to affect the outcome, but we have blocked the addresses to prevent further votes. At this point, no votes have been removed from the total cast. Unless we hear from those folks, we will subtract the appropriate number of votes if needed to keep the outcome as determined by fair voting. Remember, vote once only per person!

268 comments on “Columba vs. Kateri Tekakwitha”