Only in Lent Madness would you find a monk battling a nun across the centuries. Yet this is exactly what we have today as Constance, a 19th century American nun takes on Dominic, a 12th century Spanish monk.

Yesterday Meister Eckhart squared off against Drogo, and, sadly, it appears that the Patron Saint of Coffee entered the Lent Dome after drinking some Sanka. Eckhart handed Drogo the cup of defeat 55% to 45% and will go on to face the winner of Columba vs. Kateri Tekawitha in the Saintly Sixteen.

It may surprise you, but Lent Madness is not the only way to learn about saints. If you're interested in online Christian formation opportunities, ChurchNext is a valuable resource, with online video classes on all sorts of topics. Click here for information about a four-part video series hosted by the SEC titled "Praying with the Saints with Scott Gunn and Tim Schenck." Here's the official blurb:

In the Christian faith, the lives of exemplary Christians have inspired countless people to live more selfless and charitable lives. While a the word 'saint' can apply to any believer, as Scott Gunn and Tim Schenck explain, the term can also be applied to those who have lived particularly faithful lives. In this class, they help us understand more deeply the roles of the saints in history - and in our lives. Their lectures include: 1) What Is a Saint? 2) A History 3) How Can We Be Saints? 4) How to Pray with the Saints. 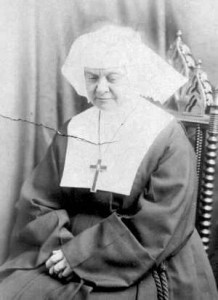 In 1981 the Anglican Communion moved to recognize a group of Episcopal nuns, the Martyrs of Memphis (or Constance and her Companions) for their heroic efforts in caring for the victims of the yellow fever epidemic of 1878.

Constance and her sisters belonged to the Order of Saint Mary. Along with eight sisters, Constance moved to Memphis, Tennessee, to establish a school. Before the new school could open for the 1873 term, an epidemic of yellow fever hit the town. Over half of the city’s residents fled. Those who remained were poor, sick, and disenfranchised. Five thousand contracted the fever, and 2,000 died. Constance and her companions were the caregivers for sixty of these patients. Because of their amazing care, only eight of their patients died. As the epidemic subsided, the sisters were finally able to open their school in 1874.

Four years later, mosquitoes descended once again on the city. Once again, people fled Memphis. Constance (along with a number of other nuns—both Roman and Anglican—several priests, a handful of doctors, and a prostitute) remained in Memphis to care for the afflicted. Records from the 1878 epidemic indicate this strain of yellow fever infected around 90 percent of the city’s population. So many people died that Memphis lost its charter as a city. It took fourteen years for the population to recover from mass casualties.

Constance and her companions were victims of the epidemic. Constance died on September 8, 1878, and is buried in the historic Elmwood Cemetery. Her last words were, “Alleluia, Hosanna.”

Collect for Constance
We give you thanks and praise, O God of compassion, for the heroic witness of Constance and her companions, who, in a time of plague and pestilence, were steadfast in their care for the sick and the dying, and loved not their own lives, even unto death: Inspire in us a like love and commitment to those in need, following the example of our Savior Jesus Christ. Amen. 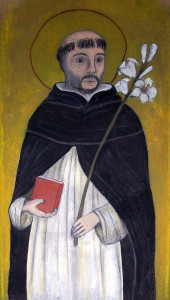 Born in Castile, Spain, in 1170, Dominic entered the priesthood at Osma. In 1206, he accompanied his bishop on a visit to an area held by a group called Albigenses. Dominic and the bishop stayed at an Albigensian inn on the first night of their trip. Dominic didn’t get much sleep. Throughout the night, Dominic conversed with the innkeeper, and when the new day dawned, the innkeeper had been converted.

This conversion was a turning point in Dominic’s life. He felt called to study this sect’s beliefs and engage in public debates comparing Christianity to Albigensian beliefs. He and the bishop made some progress, but in 1207 the bishop died and the Albigensians murdered a papal legate, a personal representative of the pope. This murder prompted the pope to declare a crusade against the Albigenses.

One of the tenets of Dominic’s life was a commitment to living in poverty. He thought an obstacle to the conversion of heretics was the material wealth of some of the clergy. With the approval of the pope, the order founded by Dominic became officially known as the Order of Preachers. They became known informally as the Dominicans or Blackfriars (because of their black habits).

Dominic was offered a bishopric and refused three times, feeling called to his work as a preacher and teacher. He died in 1220 in Bologna, Italy, after returning from one of his many preaching missions.

Collect for Dominic
God of the prophets, you opened the eyes of your servant Dominic to perceive a famine of hearing the word of the Lord, and moved him, and those he drew about him, to satisfy that hunger with sound preaching and fervent devotion: Make your Church, dear Lord, in this and every age, attentive to the hungers of the world, and quick to respond in love to those who are perishing; through Jesus Christ our Lord. Amen.

249 comments on “Constance vs. Dominic”