The Saintly Sixteen continues with Absalom Jones taking on Joseph. In the first round, Jones defeated Matthias by the largest margin of Lent Madness 2016, 82% to 18% while Absalom Jones swept past Christina Rossetti by the second largest margin, 79% to 21%. Will this be a harbinger of a tightly contested race? Only time and your (single) vote will tell.

And, yes, the Supreme Executive Committee already knows this matchup is "not fair." But of course, that's the whole point of Lent Madness -- it's not about who wins, but about how much you learn and are inspired by these incredible holy men and women who have come before us in the faith. We assure you none of these saintly souls care one iota about winning the Golden Halo -- they've already won their crown of righteousness by virtue of their faithfulness. (Well, maybe they care just a little -- it affords them some pretty sweet heavenly street cred). The real "winners?" Everyone who takes the time to read, learn, and be inspired along this Lenten journey.

Yesterday, in the first matchup of the Saintly Sixteen, Constance defeated Helena 69% to 31%. She'll go on to face the winner of Clare vs. Vida Dutton Scudder in the Elate Eight. Today is the last battle of the week but fear not! We'll be back bright and early Monday morning as Methodius takes on Albert Schweitzer in the Lent Dome.

In the mid-to-late 1700s, slaves living in Pennsylvania were allowed to marry and to learn how to write and read. Jones worked at night for many years to buy his freedom, but first he bought his wife’s. The reason? Their children would then be born free.

In Philadelphia, there is a chapel and a memorial window named for Absalom Jones. His ashes have been enshrined in the altar of the chapel.

When yellow fever struck Philadelphia in the 1790s, Absalom Jones assisted Dr. Benjamin Rush in treating people afflicted by the plague: blacks were initially thought to be immune, and many whites simply fled the city (including most doctors except for Rush and his assistants, some of whom died). Jones and other black Philadelphians helped nurse the sick and bury the dead. Jones in particular sometimes worked through the night.

One of Jones’s favorite biblical quotations was Galatians 5:1: “For freedom Christ has set us free. Stand firm, therefore, and do not submit again to a yoke of slavery.”

A renowned preacher, it's best to let Absalom Jones speak for himself:

“Our God has seen masters and mistresses, educated in fashionable life, sometimes take the instruments of torture into their own hands, and, deaf to the cries and shrieks of their agonizing slaves, exceed even their overseers in cruelty. Inhuman wretches! Though you have been deaf to their cries and shrieks, they have been heard in Heaven. The ears of Jehovah have been constantly open to them: He has heard the prayers that have ascended from the hearts of his people; and he has, as in the case of his ancient and chosen people the Jews, come down to deliver our suffering country-men from the hands of their oppressors” (“A Thanksgiving Sermon,” January 1, 1808)

“Let the first of January, the day of the abolition of the slave trade in our country, be set apart in every year, as a day of public thanksgiving for that mercy. Let the history of the sufferings of our brethren, and of their deliverance, descend by this means to our children, to the remotest generations; and when they shall ask, in time to come, saying, What mean the lessons, the psalms, the prayers and the praises in the worship of this day? Let us answer them, by saying, the Lord, on the day of which this is the anniversary, abolished the trade which dragged your fathers from their native country, and sold them as bondmen in the United States of America (“A Thanksgiving Sermon”). 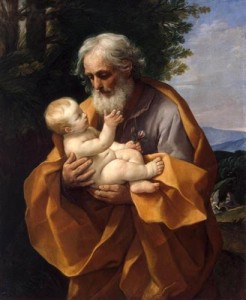 The canonical Gospels offer very few details about Joseph, the earthly father of Jesus. His mentions are limited almost entirely to the birth narratives in Matthew and Luke. It is speculated that Joseph must have died in Jesus’ childhood. Matthew presents him as a particularly righteous man, obeying God faithfully and often doing exactly what God commands word for word. And it is no small thing what Joseph was asked to do.

The earliest non-canonical stories about Joseph (found in the Proto-Gospel of James and the Infancy Gospel of Thomas—both of which are delightful, quick reads) help us understand the enormity of the task and give us a glimpse of his character.

In the Proto-Gospel of James, Joseph enters the story as an old man, widowed with his own children (according to another ancient source, Joseph is 90 with four sons and two daughters). Mary is 12 and living in the Temple. The Temple authorities need someone to look after her. Joseph is chosen by means of a divine sign—a dove emerges out of his rod and lands on his head. Joseph is initially reluctant to take on the task, citing his old age and his own children that require his care and attention. He is ultimately convinced by the priests and takes Mary into his home.

Sometime later, when Mary is found with child, Joseph expresses guilt over having failed in his responsibility to watch over her. He and Mary are brought to trial in the Temple and given a sort of truth serum, the “water of refutation.” They drink the water, no sin is revealed, and they are sent on their way. These fantastic stories remind us of the social stigma that both Joseph and Mary bore and the great sacrifices they made to serve God faithfully.

The Infancy Gospel of Thomas imagines what it must’ve been like to raise the child-God Jesus. In summary, not easy. The boy Jesus is about what you’d expect if you gave any random three-year-old total power. Jesus kills kids who bump into him, makes mute (and nearly dead?) teachers that cross him, and generally terrorizes Nazareth. At one point, Joseph, exasperated, implores Mary, “Do not let him out the door, for those who anger him die.” When a teacher expresses interest in teaching the young boy, Joseph simply replies, “If you’re that courageous, brother, take him along with you.”

But Jesus is not a terror for the whole story. He grows and matures and becomes more like the Jesus we are familiar with in the Gospels. And it is under Joseph’s steady and faithful guidance that Jesus learns how to live in harmony and to contribute to the welfare of the community.

Joseph: Painting by Reni via Wikiart.

168 comments on “Absalom Jones vs. Joseph”