What a week! With one more battle to go, we will have set the stage for the Faithful Four as the march to the Golden Halo continues. Today, Dietrich Bonhoeffer and Columba vie for the final spot as they seek to join Constance, Sojourner Truth, and Julian of Norwich.

To make it to this point, Bonhoeffer defeated Athanasius and Barnabas while Columba got past Kateri Tekakwitha and Meister Eckhart.

Yesterday Julian of Norwich skated past Albert Schweitzer 68% to 32. And in 24 hours, we bid adieu to saintly kitsch. We only encountered a few Kitsch Kranks this year and for that, we're grateful.

The Faithful Four will take place on Monday and Tuesday with the vote for the Golden Halo happening on Spy Wednesday. Onward, Lenten Soldiers!

Of course, the most famous of all St. Columba artifacts would have to be the abbey at Iona, which still exists today. Visitors from all over the world journey to the abbey for retreats and spiritual renewal.  The community at Iona continues to transform the Christian world to this day.

However, one could hardly call such a worthy endeavor mere kitsch, and kitsch is what this round is all about. Therefore, let us now, with one accord, turn our attention towards the less serious items of St. Columba’s lore.

First off, if you are in the mood to pretend you actually are St. Columba, wandering hither and yon through the Scottish countryside, you are in luck. There is a CD which purports to contain the sounds of ancient Celtic Christianity, and also features the most disturbing cover image ever! I direct you to “In Praise of St. Columba: The Sound World of Celtic Christianity.” GAZE UPON THAT MASK AND DESPAIR. 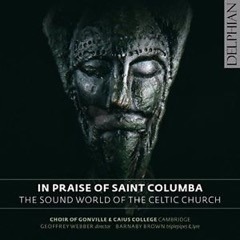 Further, to really establish your identity as the bookish saint, there is this lovely mug, with which you can subtly taunt those who would attempt to countermand your decisions regarding poets or copyright dis 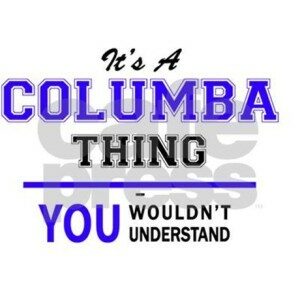 putes. Wave your hot beverage of choice; you got this. 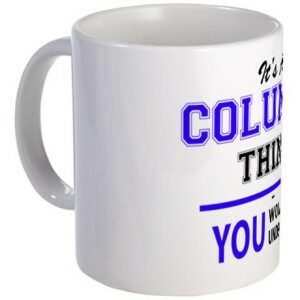 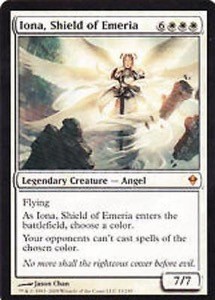 Now, because copying manuscripts by hand is no longer required in this day of technology, you will surely busy yourself playing that most intelligent of card games: Magic: the Gathering. So you are going to need this Iona card. Because this exists. That’s right--for the enormous overlapping population of those devoted to Celtic monasticism and those devoted to role-playing card games.

But maybe this isn’t enough for you. Maybe, in your slavish kitschish devotion to the Celtic saint, you desire more challenges. Then, might I suggest you undertake as well Columba’s greatest feat? You’re going to need to face the Loch Ness monster.

But not all at once; no. You will need to work in stages. First, order one of these Loch Ness monster soup ladles for your kitchen.

Practice your stirring defenses of our Lord Jesus to it.

Then, read up on how others have done it. Might I suggest this vintage copy of Dr. Who and the Loch Ness Monster? As Columba teaches, one can never do enough reading. 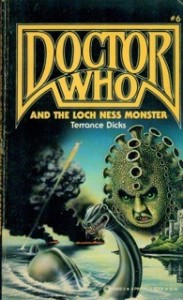 Finally, you are ready. Take a trip down to Busch Gardens, Williamsburg, and ride the Loch Ness Monster roller coaster. As you approach speeds of 60 mph, plunging down towards Nessie’s home in the lake, scream out your best admonitions to godly behavior to the deep. 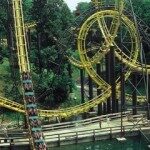 And then, as you stumble off the coaster, dazed and confused, and avoiding the other creeped-out patrons who are now calling security, you will feel a sense of peace which passes all understanding  For you have completed the Pilgrimage of Columba Kitsch. 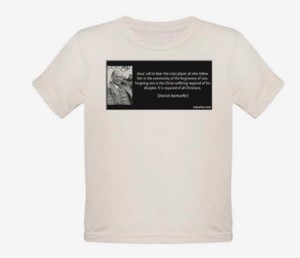 When German theologian Dietrich Bonhoeffer (born in 1906) was a teenager, a new word was coined in German….kitschen, meaning “to throw together a work of art.” This quickly evolved into the English word “kitsch,” a noun meaning “something of tawdry design, appearance, or content created to appeal to popular or undiscriminating taste.”

Kitsch? Bonhoeffer? How can we even think of putting such a distinguished theologian in the same sentence as this often disdainful word? 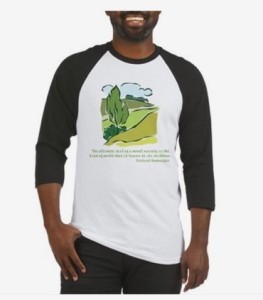 But, if you are a fan of Bonhoeffer, hoping, praying, and voting that he will be awarded the coveted Lent Madness Golden Halo, you may launch your very own collection of Bonhoeffer kitsch before this 2016 Lent Madness bracket is completed!

Let’s begin your collection with items you might wear, such as Bonhoeffer-emblazoned shirts & hats: 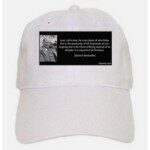 Or, perhaps Bonhoeffer “cheap grace” pajamas (don’t go there…) are more your style for remembering him in the privacy of your own home: 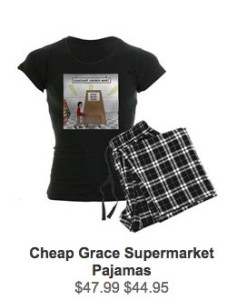 And, my personal favorite, allows you to start your child or grandchild off on his or her spiritual path with the Bonhoeffer Baby Bib (available with blue, pink or gender-neutral green trim): 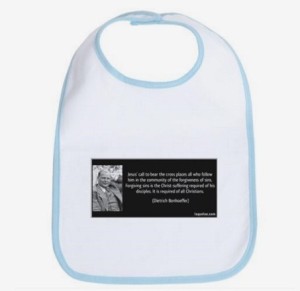 Of course, since Bonhoeffer was Lutheran and Lutherans are famous for that third sacrament, coffee, your collection must include a coffee mug or two: 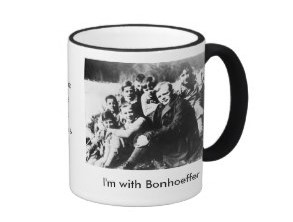 These items (and more!) are readily found at online stores CafePress and Zazzle.

But, if you want to get a jump on Dietrich Bonhoeffer with his golden halo already well in place, the good people at Trinitystores.com gave me permission to share with you that they have a fine array of icons as well as candles, notecards and other gift items for your collection featuring the iconography of Lewis Williams. 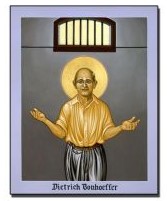 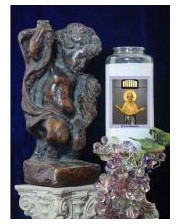 Who said that beauty is in the eye of the beholder? Well, my Google search indicates that there is some dispute about this. Whoever said it, this opportunity for you to enhance your home or office with your very own collection of Bonhoeffer memorabilia, some serious and some not so serious, certainly proves the point!

In Dietrich Bonhoeffer: A Biography authors Eberhard Bethge & Victoria J. Barnett report that Paul Lehmann, who knew Bonhoeffer in the 1930’s at Union Theological Seminary reported of him “His aristocracy was unmistakable yet not obtrusive, chiefly, I think owing to his boundless curiosity about every new environment in which he found himself and to his irresistible and unfailing sense of humor.” I’m so glad he had an unfailing sense of humor with all of this Bonhoeffer kitsch available for purchase!

The most important point is that while we can chuckle over this memorabilia, we remember Bonhoeffer as a martyred theologian with much to say to us about being faithful Christians in these often challenging 21st century days!

146 comments on “Columba vs. Dietrich Bonhoeffer”