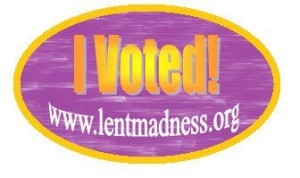 After what has felt like an interminable lead-up, it's finally Super Tuesday. People in 13 states across America will be voting in presidential primaries today. To which the Supreme Executive Committee says, "Whatever. The Lent Madness faithful has been voting every day since Ash Thursday."

What you won't find in Lent Madness are any hanging chads (Though Chad of Lichfield has appeared in the Saintly Smackdown). Nonetheless, this is a day to celebrate the democratic process so we are sharing some Lent Madness-style slogans to serve as inspiration for those heading to the polls.

9. It's Morning in America -- which means it's time to vote in Lent Madness

5. Halos We Can Believe In 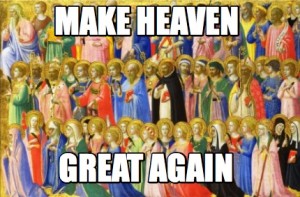 And remember, active and creative campaigning for your favorite saint is encouraged. But only cast ONE vote. This isn't Chicago.

Hopefully your voting muscles are toughened up from day after day of Lent Madness voting, because the SEC wants you to vote in your local (non-saintly) elections.

PS. If you haven't yet voted in today's matchup between Frances Joseph-Gaudet and John Mason Neale, click here to exercise your right to vote in Lent Madness!