Congratulations! You have officially survived the first full weekend without Lent Madness voting -- an activity that continues throughout the weekdays of Lent. Your reward? The long-anticipated Battle of the Augustines! Will it be Hippo or Canterbury? The choice, dear friends, is yours.

For those who didn't receive news of Friday's results (and you can always go back to the original post or check the Bracket tab), Raymond Nonnatus   ripped apart John of Nepomuk 83% to 17%.

We also have good news to report on ReviewGate, the controversy that recently touched the inner sanctum of Lent Madness. Last Friday we shared the news that someone had (shockingly!) given Lent Madness a 2-out-of-5 rating on our Facebook page. In fact, over the years we had garnered a 4.8 star rating. That might seem high but when you consider yourselves "Supreme" that's just not good enough. Thanks to the hundreds of Lent Madness fans who shared our outrage and posted their own reviews, we are up to a full 5-out-of-5 star rating with nearly 1,000 reviews. In other words, all is now right with the Lenten world. 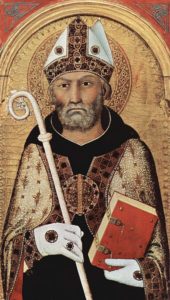 Fourth-century Bishop Augustine of Hippo is, along with Paul of Tarsus, one of the most influential theologians of the Western Church. His writings on creation, the sacraments, the Church, the Trinity, and grace are considered seminal works of Western theology. While Augustine’s work is often described as academic—and occasionally bordering on pedantic—Augustine also exhibited vulnerability, as is memorably seen in his Confessions.

From a young age, Augustine avoided saintly living. While his mother Monnica raised him as a Christian, he was never baptized. He abandoned Christianity in his youth, studying rhetoric, philosophy, and Manichaeism, a chief religious rival to Christianity in North Africa. Augustine lived a free and unconstrained life for fifteen years living with a woman and fathering a child outside the bonds of marriage. He eventually abandoned his relationship, moving to Rome to start a school and finally to Milan to serve the court as a professor of rhetoric. Augustine fell under the influence of Ambrose, Milan’s bishop, and he reached his own religious crisis, which he describes at length in his Confessions. In 387, Ambrose baptized Augustine on Easter Eve, and Augustine found the rest in God for which his heart had so longed. He returned to North Africa and lived a quasi-monastic life as a layperson until 391 when—against his own will—he was seized by the community around him and ordained as a priest. Within four years, he had been ordained to the episcopate, and he served as Bishop of Hippo until his death in 430.

Augustine’s breadth of life experience, his profound intellect, and his prayerful demeanor are evident in his writing. Augustine countered the Manichaeans’ insistence on the existence of a force in eternal opposition to God, affirming instead the goodness of creation. He defended the doctrine of the Trinity, arguing for the rationality of the three-in-one and one-in-three nature of God. Augustine asserted that the church is holy because of the calling its members receive from God. Above all, Augustine’s theology is rooted in a deep yearning and desire for God and a profound sense of the importance of the community of the Church and of all its members.

Collect for Augustine of Hippo
Lord God, the light of the minds that know you, the life of the souls that love you, and the strength of the hearts that serve you: Help us, following the example of your servant Augustine of Hippo, so to know you that we may truly love you, and so to love you that we may fully serve you, whom to serve is perfect freedom; through Jesus Christ our Lord, who lives and reigns with you and the Holy Spirit, one God, now and for ever. Amen. 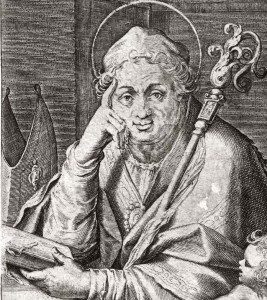 Details of Augustine’s early life are sketchy. He was born in sixth-century Rome, most likely into an aristocratic family. He is thought to have been a student of Felix, Bishop of Messana, who was a contemporary and friend of Pope Gregory the Great.

Often called the Apostle to the English, Augustine began his journey to Canterbury in 596 CE, after Pope Gregory called him to lead a group of forty (mostly monks) to the kingdom of Kent in Britannia. Travel was treacherous, and the group returned to Rome after reaching Gaul, where tales of Britannia frightened them. Pope Gregory was not sympathetic and promptly sent them back on their way, where they landed on the Isle of Thanet in 597.

The Kentish people met the monks’ ministry with interest and hospitality. Though Christianity had been previously established in southeastern Britain, many Christians had gone into hiding following the Saxon conquest. Augustine’s arrival allowed Christians to be more open about their faith. King Æthelberht of Kent was married to Queen Bertha—a Christian—and Æthelberht responded kindly toward Augustine and his fellow monks, allowing them to use an old church from the Roman occupation located in the village of Canterbury. From this modest beginning, the parish church and the town were transformed into the center of Augustine’s work and ministry.

Pope Gregory suggested—and Augustine complied—that Augustine purify rather than destroy the area’s pagan temples and practices. Working with local traditions, Augustine and his brothers spread Christianity while retaining some of the cultural traditions of the Kentish people. Augustine evangelized widely, establishing churches and schools, celebrating the sacraments, and baptizing converts. Augustine is reported to have baptized thousands of people on Christmas Day 597.

Collect for Augustine of Canterbury
O Lord our God, by your Son Jesus Christ you called your apostles and sent them forth to preach the Gospel to the nations: We bless your holy Name for your servant Augustine, first Archbishop of Canterbury, whose labors in propagating your Church among the English people we commemorate today; and we pray that all whom you call and send may do your will, and bide your time, and see your glory; through Jesus Christ our Lord, who lives and reigns with you and the Holy Spirit, one God, for ever and ever. Amen.

Augustine of Canterbury—By We El at nl.wikipedia Public domain, from Wikimedia
Commons