Today we make Lent Madness hist0ry. While Old Testament figures are considered saints in some traditions, we have never before had one participate in the Saintly Smackdown. That ends today as Sarah the Matriarch faces Elizabeth Ann Seton in a pairing that spans many, many generations.

Yesterday, in the Battle of the Consonants, Samuel Isaac Joseph Schereschewsky outspelled Nikolaus von Zinzendorf 69% to 31% to advance to the Saintly Sixteen where he'll face Martin Luther.

If you missed yesterday's Limerick Edition of Monday Madness, you can still redeem your entire week by watching it here. Tim and Scott share some limericks (both on air and in print) and, despite some amazing rhymes throughout yesterday's comment section, have officially decided NOT to turn Lent Madness into one giant penitential poetry slam. 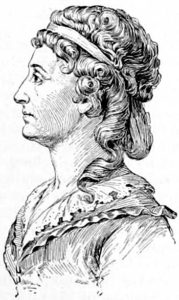 Elizabeth Ann Seton was born in New York City in 1774, two years before the United States declared independence from England. Her father was a very popular doctor, and her maternal grandfather was an Anglican priest. Seton’s parents set examples of service and charity that she would follow her whole life.

Seton had a lonely and difficult childhood, losing her biological mother to death and her stepmother to a family rift. In 1794 she married William Seton at a service performed by Bishop Samuel Provoost, the first Episcopal bishop of New York. She and her family were congregants of Trinity Church.

Three years into her marriage, her father in-law died; a few years later, her husband succumbed to tuberculosis, after having lost the bulk of the family’s wealth and social status. Seton found herself a young widow with five children and few resources. She eventually found solace in the Roman Catholic tradition, into which she was received in 1805.

Her world changed again in the next year when she met the Rev. Louis Dubourg, a Roman Catholic priest who wanted to start a Catholic seminary for women in the United States. This piqued Elizabeth’s interest and drive, and in 1809 Elizabeth founded the Sisters of Charity, the first community of nuns who were also citizens of the United States. She professed her vows and became “Mother Seton.”

Locating their community in Maryland, the sisters dedicated themselves to education, social services, and religious formation. In 1810 the community began
St. Joseph’s Free School, the first Roman Catholic school in America, and launched the Roman Catholic parochial school system in the United States. Mother Seton and her order also founded and operated orphanages in major cities along the East Coast.

Seton remained the Mother of the Sisters of Charity until her death from tuberculosis at age 46 on January 4, 1821. She was the first native-born citizen of the United States to become a saint. Her feast is commemorated on January 4.

Collect for Elizabeth Ann Seton
Holy God, you blessed Elizabeth Seton with your grace as wife, mother, educator and founder, that she might spend her life in service to your people: Help us, by her example, to express our love for you in love of others; through Jesus Christ our Redeemer, who lives and reigns with you and the Holy Spirit, one God, for ever and ever. Amen. 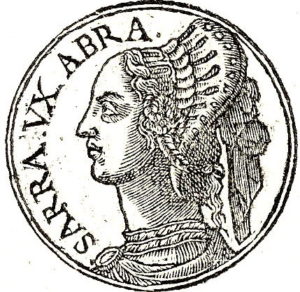 Sarah (formerly Sarai), daughter of Terah, wife of Abraham, first of the matriarchs in the Old Testament, is the mother of nations.

When Sarah was 90 years old, three strangers came to visit her tent. She and her husband and their household had been living in tents for the last twenty-five years, and she had seen and heard plenty. Abraham and his God were the mainstays of Sarah’s life; even her name had been changed as they journeyed toward a place of promise. She was Abraham’s half-sister and younger by about ten years. Abraham had pulled more than one rabbit out of his hat by diplomatically omitting the nuptial aspect of their association. He was also insistent that God had promised them a child—together. Sarah had heard some crazy things come out of Abraham’s mouth and had seen some crazy things standing at his side, but when she heard the three strangers tell Abraham that she—Sarah—would hold her very own baby in just a short while, she laughed out loud. She had been in the desert a long time, but she wasn’t all the way crazy.

Sarah laughed Isaac into the world and held the living proof of God’s promise in her own hands. If we are honest, we can imagine her making the totally opposite noise some years later when Abraham took the boy off into the badlands, clumsily trying to explain to her that God had asked him to do another impossible thing.

Some years after Abraham and Isaac returned from Moriah, Sarah died. In the first recorded commercial transaction in the Bible, Abraham bought a resting place for the woman who had moved everywhere with him and who had died while he was away on business. And in the first burial recorded in the Old Testament, Abraham lays the bones of Sarah down to rest overlooking the oaks of Mamre from where her daughter-in-law Rebekah would come. Sarah is remembered for her devotion, bravery, tenacity, and laughter.

Collect for Sarah
Ancient of Days, you have called nations into being which number more than the grains of sand on all the beaches in all the world. Thank you for Sarah, who journeyed through deserts toward a land of promise, entertained angels, laughed a promised child into the world, and mothered nations. Help us, like her, to remain faithful to your promises, no matter how unlikely the world may find them. We pray this in the name of your son, our Savior Jesus Christ. Amen.

Elizabeth Ann Seton—By Jacques Reich (probably based on an earlier work by another artist), Public domain via Wikimedia Commons