Whew! So far, this has been a week of close battles unparalleled in Lent Madness history. On Monday Mechtild of Magdeburg defeated Odo of Cluny 52% to 48%. On Tuesday Raymond Nonnatus bested Moses the Black 51% to 49%. And yesterday Augustine of Canterbury snuck past Scholastica 51% to 49%.

This heart-pumping saintly action is enough to make you want to do some yoga. Or deep breathing exercises. Or drink some chamomile tea. Something calming! But instead, the battles just keep coming. Today it’s the scrappy Samuel Isaac Joseph Schereschewsky taking on the heavyweight Martin Luther. Is an upset in the making? Another tight race? Or will a blowout break the string of hotly contested, halo-busting battles?

Note that yesterday’s battle was not without controversy. The following was posted by the Supreme Executive Committee:

The SEC noticed an irregular surge of votes for Scholastica around midnight. Well over 6,000 votes were found to be cast irregularly in an attack using bots around the world. We have removed what we believe to be the correct amount of votes, and will continue to monitor this race. One person, one vote. If you break this rule, your votes will be removed and you will be cast off into the outer darkness of Lent Madness.

We are confident in the final result. But remember, Big Lent is watching. 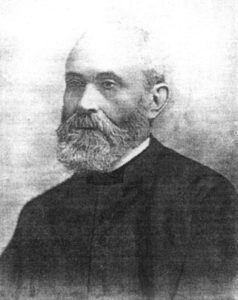 SIJ Schereschewsky was a cleric, missionary, and renowned translator of the prayer book and Bible. He knew 13 languages, and spent the last twenty years of his life typing out his translations with the fingers he still could move. (Sources vary on whether it was one or two fingers. Either way–that sounds hard.)

First off, his last name is pronounced “Share-es-shev-ski”. Think of Duke men’s basketball’s famous head coach from that OTHER bracket game for reference.

Schereschewsky’s translation of the Bible into Mandarin was so well-done that it became the standard translation that is still in use today. It took him from 1862-1875, so all that time was clearly justified. But he didn’t stop there. He believed that people couldn’t be truly faithful without also being educated, so he founded St. John’s University at Shanghai, and then went to work translating everything also into Wenli–another Chinese dialect. It was the Wenli manuscript that he meticulously typed out using two fingers, after Parkinson’s disease left him entirely paralyzed. The disease had caused him to resign his seat as the bishop of Shanghai, but he was determined that it should not stop his ministry. He produced over 2,000 pages just by sitting in his chair, and hen-pecking.

His contemporary biographer describes him thus: “paralysed in every limb, and with his powers of speech partly gone, sitting for nearly twenty-five years in the same chair, slowly and painfully typing out with two fingers his Mandarin translation of the Old Testament and Easy Wen-li translation of the whole Bible.”

Schereschewsky grew up Jewish, and until his conversion, intended to be a rabbi. This affinity for Judaism didn’t disappear after his ordination; while in China, a small group of Kaifeng Jews–a tiny minority of Jews who emigrated to central China from Persia in the Middle Ages, came to visit him. This began a friendship, and Shereschewsky gave their community the Hebrew Scriptures that he translated into Mandarin. The community termed it “The Two-Finger Bible” because of Schereschewsky’s disability. This also contributes to the longevity of his biblical translation.  Because he knew Hebrew, and understood midrash and rabbinic ideas, modern scholar Irene Eder notes that his version “can be regarded as the only Chinese Old Testament to reflect not only the traditional Jewish text but to also included elements of the Jewish exegetical tradition.”

Regarding his work, he said, “I have sat in this chair for over twenty years. It seemed very hard at first. But God knew best. He kept me for the work for which I was best fitted.” 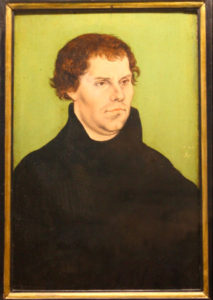 Martin Luther’s life was filled with quirky meanderings. The path of his life bemused even him, “I am the son of a peasant…and the grandson and the great grandson. My father wanted to make me into a burgomaster. He went to Mansfeld and became a miner. I became a baccalaureate and a master. Then I became a monk and put off the brown beret. My father didn’t like it, and then I got into the pope’s hair and married an apostate nun. Who could have read that in the stars?” (Table Talk).

When he discovered that the people living around Wittenberg were not properly schooled in the basics of the faith, he wrote the Small Catechism, proposing this learning regimen “Children should be taught the habit of reciting [the Ten Commandments, the Creed, and the Our Father] daily… Until they recite them they should be given nothing to eat or drink.”

Luther took his faith and work seriously, but he also loved life: “Tomorrow I have to lecture on the drunkenness of Noah, so I should drink enough this evening to be able to talk about that wickedness as one who knows by experience.”

“Whenever the devil harasses you, seek the company of men or drink more, or joke and talk nonsense, or do some other merry thing. Sometimes we must drink more, sport, recreate ourselves, and even sin a little to spite the devil, so that we leave him no place for troubling our consciences with trifles. We are conquered if we try too conscientiously not to sin at all. So when the devil says to you: do not drink, answer him: I will drink, and right freely, just because you tell me not to.”

And, scholars throughout history have been amused, occasionally appalled, by his scatological humor and insults: “Almost every night when I wake up the devil is there and wants to dispute with me. I have come to this conclusion: When the argument that the Christian is without the law and above the law doesn’t help, I instantly chase him away with a fart.” (Table Talk)

“Perhaps you want me to die of unrelieved boredom while you keep on talking.” (Luther’s Works)

And, some things haven’t changed even 500 years after Luther so pointedly highlighted time-wasting meetings: “If you who are assembled in a council are so frivolous and irresponsible as to waste time and money on unnecessary questions, when it is the business of a council to deal only with the important and necessary matters, we should not only refuse to obey you, but consider you insane or criminals.” (Luther’s Works).