We're back for the first full week of saintly thrills and spills! Today we get our first matchup in the Mostly Modern quadrant as Anna Alexander faces Peter Claver. Of course it's all relative -- Anna lived in the 19th century and Peter straddled the 16th and 17th centuries. But what's a few hundred years among friends?

On Saturday, Quiteria the nonuplet warrior defeated Genesius in a fairly close battle 54% to 46%. She will go on to face the winner of Thomas à Kempis vs. Maria Skobstova in the Saintly Sixteen.

For those of you who filled out brackets in advance, is it already busted? Or maybe a saint you really wanted to win has lost, causing you to lose all faith in humanity -- or at least in the Lent Madness voting public. Just a reminder -- it's not really about which saints win or lose (they've all received their Golden Halos) -- it's about encountering Jesus through the inspiring lives of those who have come before us in the faith. So buck up! And live to vote another day. 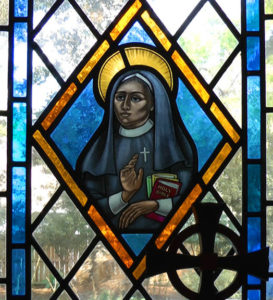 Anna Alexander was the first African-American Deaconess of the Episcopal Church. Deaconess Alexander was born around 1865 on Saint Simon’s Island in Georgia. Her parents, James and Daphne Alexander, were well-educated and emancipated slaves. Her father, James, believed education was the path to a better life for the people on the plantation, and he continued to teach Anna and her siblings in defiance of Georgia laws that forbade the education of slaves.

James and Daphne Alexander instilled in their daughter a strong belief in shared and communal responsibility and the idea that change occurs in the relationships built within our communities. As a result, Anna is credited with establishing an Episcopal church and school in Pennick, Georgia. The community initially met in an abandoned farmhouse and then in an old store, where they converted the whiskey counter into an altar. Faced with antiquated diocesan and societal laws, Anna’s mission church struggled financially, and Anna took up sewing, teaching, and other jobs to raise money to purchase land for a permanent church and school. Through her community relationships, she drew upon the financial support of her fellow brothers and sisters. Through their combined efforts, they were able to build the Good Shepherd Episcopal Church and school.

At a Convention for Colored Episcopalians in 1907, Bishop C.K. Nelson named Anna a deaconess. During the time of her diaconate, it was virtually unheard of for a woman to be recognized as a leader in the church—especially an African-American woman. Anna’s hard work, devotion, and dedication to the Christian formation of black communities ensured that the voices of African-American Christians were heard throughout the Diocese of Georgia. Deaconess Alexander felt that anger about how society treated women and African-Americans was a wasted emotion and believed she could change her community through education and love. She exhibited this love through a devotion to Christian formation. Deaconess Alexander offers us an example of a life of faith rooted in a boundless love of others.

Collect for Anna Alexander
O God, you called Anna Alexander as a deaconess in your Church and sent her as teacher and evangelist to the people of Georgia: Grant us the humility to go wherever you send, and the wisdom to teach the word of Christ to whomever we meet, that all may come to the enlightenment which you intend for your people; through Jesus Christ, our Teacher and Savior. Amen. 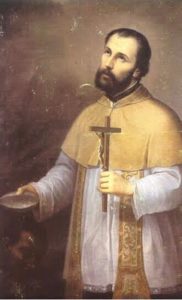 Times of great evil are often opportunities for profound witness to the love of God. The deep evil of the transatlantic slave trade was just such a time, and it was into that moment in history that Peter Claver, SJ was born in 1580.

During studies in his home country of Spain, Peter joined the Society of Jesus. The Jesuits sent him out to be a part of their mission to the Americas. Peter encountered the horrors of the slave trade and through the tutelage of another Jesuit was introduced to ministry among the Africans who were being trafficked through the port of Cartagena, Colombia.

After being abducted from their homes in Africa, the victims of the slave trade became a commodity to their captors. They were packed inhumanely into ships, fed minimal amounts of food and water, and sailed across the Atlantic to the Americas. During the horrific journey, about a third of all African slaves died.

Each year, 10,000 slaves would arrive in Cartagena. As soon as a slave ship arrived, Peter descended into the hold—into the midst of the sickness, death, and suffering. He brought medicine, food, water, and words of comfort. As the slaves disembarked, Peter continued to minister among them. After six years of this ministry, Claver made his final profession as a Jesuit. He signed his name, “Peter Claver, slave to the Ethiopians [Africans].”

Peter continued his ministry among the slaves of Cartagena for thirty more years. In addition to his time in the port, he often traveled out to plantations so he could continue to care for the slaves.

During his four decades of ministry, Peter baptized at least 300,000 people. His ability to share the Good News of Christ was closely tied to his compassion and care for the physical needs of the victims of slavery. In considering the connection between preaching and service, he once said, “We must speak to them with our hands, before we try to speak to them with our lips.”

In the face of great evil and suffering, we may feel overwhelmed. Peter Claver reminds us of the profound difference that one person acting compassionately can make.

Collect for Peter Claver
God of grace and glory, we praise you for your servant Peter Claver, who made the good news known in Colombia. Raise up, we pray, in every country, heralds of the gospel, so that the world may know the immeasurable riches of your love, and be drawn to worship you, Father, Son, and Holy Spirit, one God, now and forever. Amen.