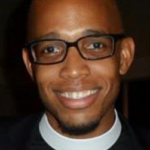 Finally! A newly-minted Celebrity Blogger to introduce. We're excited to add Marcus Halley to the Lent Madness team this year. Sure, Minnesota is now over-represented (cough...David Creech...cough) but can you really ever have too much tuna fish casserole?

In other news, for your pre-Lenten reading pleasure, here's a rare, behind-the-scenes Q & A with Lent Madness creator Tim Schenck. Among other tidbits, learn which Celebrity Bloggers cause him to lose sleep with their loosely held definition of "deadline."

The Rev. Marcus Halley is an Episcopal priest and rector of Saint Paul’s Church on Lake of the Isles in Minneapolis, Minnesota. A native North Carolinian, Marcus previously served as Pastor for Young Adults and Families at St. Andrew’s Episcopal Church in Kansas City, Missouri in the Diocese of West Missouri. He is a graduate of Johnson C. Smith University (Charlotte, NC), the Interdenominational Theological Center (Atlanta, GA), and the School of Theology at the University of the South (Sewanee, TN.)  Prior to ordination as an Episcopal priest, Fr. Marcus served as a pastoral resident at Emory University Hospital – Midtown in Atlanta, Georgia. This is his first year as a Celebrity Blogger.

I want to exercise my priestly prerogatives conveyed to me via an obscure rubric in a Prayer Book only I have access to and answer this question twice. First, I would have dinner with Michael the Archangel because, I mean, wouldn't you? He's an ANGEL! Like, that is literally what he was created as. I'd love to sit down with him and ask him what it feels like to be the hitman/henchman/bodyguard of the Most High. That's got to be a hard job.

In actuality, I'd love to share a meal with Benedict. He initiated a revival of faith and spirituality in a world not unlike our own -- increasingly secular and sectarian. I'd love to talk with him about how he did it. I am deeply interested in how a world going up in flames can be the catalyst of renewal. 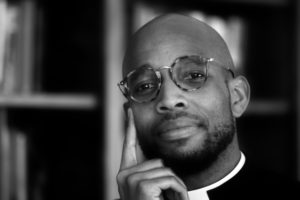 To be honest, there are so many that I'd love never to hear again, but "Look there! The Christ, our brother comes," hymn 196 or 197 in The Hymnal, 1982 is a hymn that comes quickly to the top of the list. I will never forget the time we sung it in seminary (at Sewanee) and the entire congregation burst into uncontrollable, deep-belly laughter.
Using my priestly prerogatives again, I want to offer on Heaven's Spotify playlist: Come thou fount of every blessing and Love divine all loves excelling (Blaenwern).
3. You're busy during Lent. Why do you make time for the Saintly Smackdown? What do you get out of it personally?
I am busy during Lent from a purely chronological perspective; however, I try to make sure that whatever I am doing during Lent is furthering the work of the Reign of God in my parish community and in my life generally. It also connects me with people which, in a time of busyness, is a helpful anchor and reminder.
Posted in:
Lent Madness 2018