Dymphna vs. Gertrude of Nivelles

Madness and cats. These are among the factors you will be deciding upon as you cast today's vote between Dymphna, the patron saint of madness, and Gertrude of Nivelles, the patron saint of cats. But of course the lives of saintly souls are more than the various aspects of life we've appended to them over the years. Which is why people read, mark, learn, and inwardly digest the Lent Madness write-ups before deciding which saint resonates with them on a particular day. That's the joy embedded in the process.

Yesterday, Katharina von Bora defeated Wulfstan 55% to 45% to advance to the Saintly Sixteen. All is not lost for Wulfstan, however. Apparently many Lent Madness voters will be naming their next cats after him. 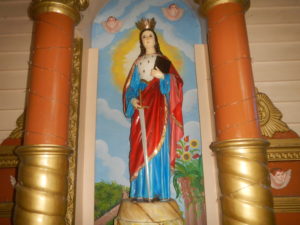 Dymphna lived in the seventh century and was the daughter of a pagan Irish king and his Christian wife. Her story was passed down for centuries via oral tradition and first written down in the thirteenth century.

At fourteen years old, Dymphna dedicated herself to Christ and took a vow of chastity. Her father, grieving the death of his beautiful wife, began to desire to take Dymphna as his wife. Dymphna fled to Belgium and took refuge in the town of Geel, where she carried out good deeds and acts of mercy until her father tracked her down. He traveled to Geel and tried to force Dymphna to return with him to Ireland, but she resisted. Furious, her father drew his sword and beheaded his fifteen-year-old daughter.

Dymphna’s inspiring legacy has formed the town of Geel into a place of miraculous compassion. In the middle ages, pilgrims traveled from all over Europe to visit the church named in her memory and to seek treatment for the mentally ill. When the church ran out of room to house pilgrims, townspeople opened their own homes. This tradition of care has endured in Geel for more than seven hundred years. Pilgrims and patients are still invited into residents’ homes as boarders and welcomed as valued members of the community. At its peak in the 1930s, Geel’s citizens hosted more than 4,000 boarders.

Saint Dymphna’s feast day is celebrated May 15. She is traditionally shown as a regal princess holding a sword. In modern versions, the sword symbolizes her martyrdom, but in the older statues and stained glass images, she is pricking the neck of a demon with her sword, symbollically slaying the demons of mental disorders.

Collect for Dymphna
Loving God, who chose Dymphna as patroness of those afflicted with mental and nervous disorders, grant comfort and healing to all who suffer from mental illness and courage and compassion to all those who minister to the mentally ill. May your church take inspiration from her good example, so that like Dymphna and the people of Geel we may open our hearts and lives to those in need, in the name of our Savior Jesus Christ who lives and reigns with you and the Holy Spirit, one God, now and for ever. Amen. 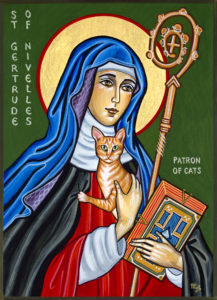 Gertrude was born around 626 to two faithful Christians who were also powerful political figures in western Europe. She lived with her family at the royal court. As the daughter of a nobleman, Gertrude was a highly prized potential wife.

When her father died a decade later, her mother Ida (or Itta) founded and built a double monastery (where men and women served together) in Nivelles in modern-day Belgium. Wealthy widows of the time often established monasteries to protect their children, especially unwed daughters, and their familial lands from seizure should the political powers change. Ida also tonsured her daughter; this act of shaving the head marked Gertrude for religious life and helped stop the constant flow of persistent suitors vying for her hand in marriage—and control of her great fortune and power.

Upon her mother’s death, Gertrude became abbess of the monastery at Nivelles. Under her leadership, the monastery became known as a safe harbor for all travelers. She welcomed pilgrims, monastics, and missionaries as well as their teachings and traditions, inviting guests to teach those in the monastery new chants and to tell stories of Christianity from other lands.

Gertrude remained singularly dedicated to Christ throughout her life. She spent hours devoted to prayer, especially for those who had died. She wore a hairshirt, a shirt made of rough fabric with a layer of animal hair and used for self-mortification. She was buried in her hairshirt and a discarded veil when she died at age 33.

She is often pictured with mice, and gold and silver mice were left as offerings at her shrine in Germany as late as the nineteenth century. Mice often represented souls in purgatory, and Gertrude prayed fervently for those who had died. Legend holds that the souls of those who have died in the Lord spend their first night in heaven with Gertrude as their hostess.

Collect for Gertrude of Nivelles
Gracious God, lover of souls, we give you thanks for Gertrude who singularly dedicated her life to welcoming the traveler and praying for those who have died: Grant that we too may seek to entertain angels unaware and to pray for those who have entered eternal rest, through Christ our Lord. Amen.

Dymphna vs. Gertrude of Nivelles

Dymphna: By Judgefloro (Own work) [CC0], via Wikimedia Commons

306 comments on “Dymphna vs. Gertrude of Nivelles”