Who’s tan, rested, and ready for another full week of saintly action? That was rhetorical. Of course you’re tan. Today we have an intriguing Biblical matchup between Esther and Lazarus. Courageous queen vs. friend of Jesus. Who will advance? That’s up to you.

After a depressing weekend without any voting, you may have forgotten what transpired on Friday. Edith Cavell, yet another one of the 2018 Cinderellas, took down theological heavyweight John Wesley 68% to 32%. She’ll face Anna Alexander in what should be a lively Saintly Sixteen matchup.

It’s hard to believe we’re exactly halfway through the first round. But it’s true. Eight matchups down, eight matchups to go before it’s on to the the next round. Hang on to your halos! 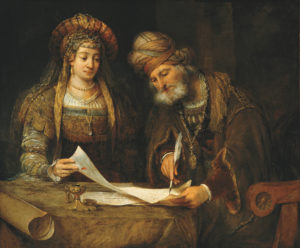 Esther, a saint from the Hebrew Bible, lived between 520-450 BCE, in the Persian Empire. She was an orphan raised by her devout cousin Mordecai. King Ahasuerus was king of Persia, but he was not known for being a nice guy. When we first meet him, he summons his wife Vashti to appear before a room of visiting dignitaries. When she refuses to appear, he orders her to be killed. Yikes.

To replace Vashti, the king holds an ancient beauty pageant: Women from all over the empire are summoned so that he may choose his favorite. Esther is declared the most beautiful in the kingdom and becomes queen—but she has not told anyone at the court, including the king, that she is Jewish.

Meanwhile, Haman, the king’s chief advisor, is struggling with some major ego issues. Because he believes Mordecai slighted him on the street, Haman convinces the king to order the murder of all Jews in the kingdom.

Mordecai informs Esther, urging her to do something. So Esther concocts a plan. In Persia, a law forbade entering the king’s presence unless he sent for you, under penalty of death. Esther asks the Persian Jews to pray and fast with her. Then, she gets dressed up and goes before the king—unrequested—and risks her own life.

Thankfully, the king has pity on her and grants her an audience. She takes the opportunity to invite the king and Haman to dine with her that evening. That dinner party goes so well that she suggests a second dinner party the next evening. The second night, after dinner is winding down, and everyone is in a good mood, Esther seizes the opportunity to come out as Jewish and announces that if Haman is to kill all the Jews in the land, then that would include her. MIC. DROP.

The king immediately decrees that Haman should be executed. He stipulates that the Jews will now be allowed to fight in their own defense on the day of the proposed mass execution. And so Esther saves the Jews of Persia.

Esther’s story has come to be seen as emblematic of how a minority can wield power within a majority culture. She negotiates power imbalances and exercises her privilege on behalf of her people and in the service of God. Through her story, she is wholly herself and still protects her people.

Collect for Esther
O God of the dispossessed, kindle in us the confidence and certainty of Esther, that we may hold fast to who we are, and seek to do your will, even in the most difficult of circumstances, through Christ our Lord. Amen.

Lazarus of Bethany (also Lazarus of the Four Days, referring to the time he was dead for four days) is intimately connected with the life of Jesus.

According to the New Testament witness, Lazarus and his sisters, Mary and Martha, were some of Jesus’ closest friends. The eleventh chapter of John’s Gospel recounts Jesus’ deep grief over the death of Lazarus, and the subsequent miracle of his resurrection.

Like many biblical figures, Lazarus only makes a brief appearance in the text itself, but numerous extra-biblical traditions have been handed down and provide deeper detail. According to John 12, Lazarus’s resurrection garnered a great deal of attention, both from those who were inspired by the story and from those who were threatened by it. Later tradition suggests that Lazarus fled Judea for someplace safer, perhaps in response to threats upon his life.

Two theories developed about Lazarus’s flight from Judea; a more recent tradition tells of his travels to Marseille, France, while an older tradition tells of him settling in Cyprus. In both traditions, Lazarus lived for another three decades and continued to witness to the work and message of Jesus.

Although there are few details of Lazarus’s personality, it is not hard to imagine that his death and resurrection must have profoundly changed him. According to one story, seeing death made him very somber, and he smiled only once in his remaining thirty years.

Some scholars have suggested that Lazarus is the unnamed “Beloved Disciple” of John’s Gospel, a view that adds even more poignancy to the scene of Jesus’ grief outside the tomb of Lazarus.

In Western traditions, the witness of Lazarus is remembered, along with his sisters, on July 29. In the Orthodox church, the day before Palm Sunday is known as Lazarus Saturday—a foretaste of the joy of Easter Sunday as the church prepares for Holy Week.

Collect for Lazarus
Generous God, whose Son Jesus Christ enjoyed the friendship and hospitality of Mary, Martha, and Lazarus of Bethany: Open our hearts to love you, our ears to hear you, and our hands to welcome and serve you in others, through Jesus Christ our risen Lord; who with you and the Holy Spirit lives and reigns, one God, for ever and ever. Amen.

Esther vs. Lazarus of Bethany

215 Comments to "Esther vs. Lazarus of Bethany"