Today is the one and only weekend vote of Lent Madness 2018. Every other matchup will take place on the weekdays of Lent. And it's an intriguing pairing! We get Genesius, a saintly cut-up (he was a comedian and, more literally, had his head chopped off) facing off against Quiteria, a nonuplet Christian warrior and martyr. Which saint will be "re-martyred?" Well, that's up to you.

Yesterday, in a rout of Biblical (see what we did there?) proportions, Margaret of Scotland destroyed Charles I 89% to 11% and will face the winner of Mary of Egypt vs. Richard Hooker. Speaking of future rounds, if you're interested in seeing when your favorite saint will be doing battle, check out our Matchup Calendar. Better yet, print it out and tape it to your bathroom mirror.

Lent Madness will continue first thing Monday morning as we dip into the Mostly Modern quadrant of the bracket for the first time with Anna Alexander taking on Peter Claver.

A comedian, Genesius led a theatrical troupe in Rome in the third century. Desperate to advance his career, he decided to write and star in a play for the Emperor Diocletian.

As he contemplated the subject matter, Genesius decided to mock the mysteries of the Christian faith and expose the ridiculousness of the sacraments. Of course, he needed some inside knowledge on the subject matter, so Genesius studied for the role by lying to members of a Christian community, telling them that he wanted to prepare for baptism.

The community welcomed Genesius into the catechumenate. While he learned the teaching, more details for the play came to him. He would act like a man on his deathbed, calling out for baptism.

He wrote the play and began the performance before the emperor. In the middle of a scene, Genesius depicted a dying man calling out for his faux sacrament. An actor arrived in clerical garb and baptized Genesius. Somehow, the ridicule ended there. Genesius was overcome with the grace of God, and what began as a farce became a real act of faith. Genesius was transformed, and while he was still on the stage, he urged the emperor to convert to Christianity.

Diocletian did not have the same change of heart. Instead, he became enraged and demanded that Genesius be tortured until he recanted. Genesius suffered greatly, but he never denied his faith. So Diocletian had him beheaded.

Genesius is the patron saint to the comic, the actor, and the tortured.

Collect for Genesius
God of laughter and suffering, we pray that through all of our art, we might reflect the goodness of your grace. May our lives be transformed through creative work, as we serve in the likeness and the image of our Creator; through Jesus Christ our Lord. Amen. 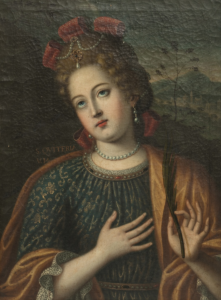 Quite often, little is known about the saints beyond their existence and stories that have arisen among Christians to honor them over centuries. At first glance, many overlook Quiteria, in part perhaps because little is known beyond her naming in the Roman Martyrology as a saint and martyr.

But in southern France and northern Spain, churches remember Quiteria as a virgin and martyr. The most compelling legend of Quiteria, however, is Portuguese. Quiteria was a nonuplet—one of nine sisters born at the same time. Her mother, wife of the Roman governor, contemptuously likened her daughters to a litter and worried that she might be compared to a common animal for giving birth to so many children at once. In her vanity, she ordered her children drowned in a river by their nurse. Unwilling to kill the children, the nurse took the nonuplets to her own village and raised them away from their mother and father. It was in this village that Quiteria and her sisters were raised as devout Christians.

As they matured, the sisters’ faith compelled them to form a sort of gang–-one that went around freeing Christians from prisons in the area. Ultimately, Quiteria and her sisters were caught and commanded to worship a Roman god. Refusing, they were hauled before the Roman governor— their father—who immediately recognized the women as his daughters. He begged them to marry Roman pagans. The sisters refused and were thrown in prison.

As a rule, nonuplet warrior gangs don’t take imprisonment lightly. Resourcefully, they broke out of jail, freeing fellow prisoners with them. Upon gaining their freedom, rather than retreating into the woods, Quiteria and her sisters engaged in guerrilla warfare against the Roman Empire. Their campaign was ultimately unsuccessful, and Quiteria was captured, beheaded, and thrown into the ocean, while her sisters escaped. Legend holds that when guards were sent to capture her sisters, Quiteria emerged from the ocean, holding her own head and warding off the Roman guards from their pursuit. Two of her sisters, Marina and Liberata, were also martyred and ultimately canonized.

Collect for Quiteria
Almighty God, by whose grace and power your holy martyr Quiteria triumphed over suffering and was faithful even to death: Grant us, who now remember her in thanksgiving, to be so faithful in our witness to you in this world, that we may receive with her the crown of life; through Jesus Christ our Lord, who lives and reigns with you and the Holy Spirit, one God, for ever and ever. Amen.

280 comments on “Genesius vs. Quiteria”