In the last battle of a full week, John Wesley takes on Edith Cavell. Will the Methodists among us rally the troops for the de facto founder of their denomination? Or will the compelling story of an English martyr carry the day?

In Thursday's action, upstart Maria Skobtsova soundly defeated Thomas à Kempis 74% to 26% to advance to the Saintly Sixteen where she'll face Quiteria. Thursday was also a big day for Lent Madness fans in Hannibal, Missouri, as an article titled Churchgoers Participate in Lent Madness Activity made the front page of the local paper, the Herald-Whig. Kudos to all the Lent Madness fans at Trinity Episcopal Church in Hannibal!

As we prepare to take a deep weekend breath, please do try to survive without voting on Saturday and Sunday. Symptoms of Lent Madness Withdrawal (LMW) are real and we encourage you to reach out to Lent Madness-playing friends and family to see you through this two-day wilderness. LMW support groups are forming in church basements everywhere. And fear not! We'll return bright and early Monday morning as Esther takes on Lazarus. Now go read and vote!

The impact on the religious landscape made by John Wesley is undeniable and far-reaching. John was an Anglican priest and theologian and the founder of the Methodist movement.

Born in 1703 in England, John was the son of a clergyman and the youngest of fifteen children, including his brother Charles, a well-known hymn writer and Anglican priest. At five years old, John survived near-death in a rectory fire—he was saved thanks to parishioners who formed a human ladder to rescue him. This event marked him for life.

He was highly educated and a graduate of Christ College, Oxford. At school, he prayed and studied scripture with his brother, Charles; their friend, George Whitefield, also a priest; and others in a group deemed “Methodists” because of their method of spiritual disciplines.

Ordained in 1728, he and Charles were sent in 1735 to Savannah, in what was then the British colony of Georgia. John did not fare well—there were personal issues and ineffective ministry. After two years, he returned to England in defeat. While onboard, through stormy waters, he befriended Moravians and took to their ways, which he found calming and Spirit-filled. John underwent a religious experience in 1738, in which he said his “heart strangely warmed.” He believed that God charged him with initiating a revival in the church. He parted ways with the Moravians and embarked on his own ministry. Along with Charles and George, John traveled the country, forming Christian groups and worshiping communities. The Methodist movement flourished.

He became a prolific preacher and writer, delivering an estimated 40,000 sermons in his life. John wrote or edited more than 400 publications on issues such as theology, music, prison reform, marriage, medicine, slavery, and politics. Some of his more famous works include Forty-Four Sermons, Notes on the New Testament, Thoughts Upon Slavery, and Collection of Psalms and Hymns, the first Anglican hymnal published in America.

Collect for John Wesley
I am no longer my own, but yours. Put me to what you will, rank me with whom you will; put me to doing, put me to suffering; let me be employed for you, or laid aside for you, exalted for you, or brought low for you; let me be full, let me be empty, let me have all things, let me have nothing: I freely and wholeheartedly yield all things to your pleasure and disposal. And now, glorious and blessed God, Father, Son and Holy Spirit, you are mine and I am yours. So be it. And the covenant now made on earth, let it be ratified in heaven. Amen. 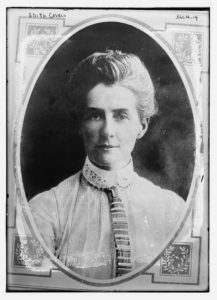 When Edith was a young girl in the late 1800s, she informed the bishop that her father’s church in Swardeston, near Norfolk, England, needed a room for the growing Sunday School. The bishop offered help—so long as Edith raised money as well. Edith and her sister began painting cards and raised some 300 pounds (about $30,000 in today’s funds), and she contacted the bishop. St. Mary’s, Swardeston, built the addition, and Sunday School classes thrived.

As an adult, Edith continued her life of service. Her early work as a governess in Belgium was interrupted when she returned home to Swardeston to nurse her father back to health. This experience led Edith to explore nursing, and she was eventually placed in charge of L’Ecole Belge d’Infirmieres Diplomees, a nursing school for women in Brussels.

World War I began, and Brussels was invaded. Edith was visiting family in England, but she immediately returned to Brussels. Realizing the danger for citizens and soldiers alike, Edith helped provide an underground escape route for those fleeing to the Netherlands. More than 200 soldiers escaped to safety. German military authorities discovered her acts. Edith confessed—which likely saved the lives of others who assisted her—and was sentenced to death.

As she awaited execution, the Germans allowed an Anglican priest to visit her. He recalls that in their final meeting, Edith received communion and prayed, expressing forgiveness toward her executioners. She said, “I thank God for this ten weeks’ quiet before the end. Life has always been hurried and full of difficulty. This time of rest has been a great mercy. But this I would say, standing as I do in view of God and eternity, I realize that patriotism is not enough. I must have no hatred or bitterness toward anyone.”

Edith’s execution on October 12, 1915, horrified the world. Her grace stunned even her captors. After the war ended, Edith’s remains were exhumed, and she was reburied with great ceremony in a cemetery near her childhood home in Swardeston.

Edith believed that patriotism must be examined through love for our fellow humans and through the commandment of Christ to love and forgive without regard to nationality, ethnicity, or our own bitterness.

Collect for Edith Cavell
Holy God, in grace and mercy your Son asks us to love our enemies and forgive those who persecute us: Grant us the desire to follow the example of your servant Edith Cavell who, in your name, healed the wounded, guided those in danger to safety, and forgave those who persecuted her as she was sustained by your word and sacrament; through the name of your Son Jesus Christ our Lord. Amen.