Margaret of Scotland vs. Charles I

Whew! Well, that was quite a start to Lent Madness 2018. The epic battle between Peter and Paul did not disappoint. In very heavy and heart-thumpingly close voting, Peter edged Paul 51% to 49% with nearly 9,500 votes cast and will face the winner of Phoebe vs. John the Evangelist in the Round of the Saintly Sixteen.

Today Margaret of Scotland takes on Charles I in a Battle Royale. No, literally, it's a battle between royals -- queen vs. king. But please don't refer to this as regicide. Charles is a bit touchy on that subject.

Looking ahead, tomorrow will be the one and only matchup of Lent Madness that takes place on a Saturday. Every other pairing will take place on the weekdays of Lent. So don't forget to set your alarm, make your coffee, and then vote as Genesius takes on Quiteria.

But first, a reminder about our one-vote-per-person rule. Last night at 7:58 pm Eastern time, the SEC removed 254 votes from Paul. We found that someone in Little Rock, Arkansas, had voted for Paul repeatedly (we can verify that it was not Bill Clinton). This person was cast into the outer darkness of Lent Madness, where there is weeping and gnashing of teeth. We do appreciate saintly passion. But we ask that everyone respect the integrity of this little competition. We do keep an eye on voting irregularities. Think Big Brother -- only more purple.

Margaret of Scotland is the patron saint of that country. An English princess born in 1045 in exile in Hungary, Margaret was also known as Margaret of Wessex and the Pearl of Scotland, homages to both her social status and her lifelong ministry.

Princess Margaret was married to King Malcom III of Scotland, the same Malcolm immortalized by William Shakespeare in Macbeth. A deeply religious Christian, Margaret was a reformer and social justice crusader. She helped build and restore churches throughout Scotland, including Iona Monastery and the Abbey of Dunfermline, where a relic of the cross of Christ was housed and where she would eventually be buried.

Margaret endeavored to change the aged and dated ways of the clergy in Scotland, bringing that church on par with the religious practices conducted elsewhere in Christendom. For example, she believed that on the Lord’s Day, “We apply ourselves only to prayers.” She was also known to read the Bible to her illiterate spouse.

Margaret was a queen and the mother of kings, queens, a countess, and a bishop. Notwithstanding, of particular significance is that she can be considered the true patron saint of Lent Madness! As an observance of her faith, Margaret insisted that clergy start the Lenten season on Ash Wednesday.

She was a reformer beyond the church as well, establishing schools, orphanages, and hospitals throughout Scotland. Margaret and Malcolm were tireless in their efforts to improve the living conditions of the Scottish clans. Many churches are dedicated to Margaret, such as St. Margaret’s Chapel in Edinburgh Castle, founded by her son King David I in the twelfth century. Today the chapel is one of the oldest remaining buildings in Edinburgh.

Margaret died on November 16, 1093, in Edinburgh, three days after her husband and eldest son were killed in battle. Canonized in 1250, she is honored on
November 16.

Collect for Margaret of Scotland
O God, you called your servant Margaret to an earthly throne that she might advance your heavenly kingdom, and gave her zeal for your Church and love for your people: Mercifully grant that we who commemorate her this day may be fruitful in good works, and attain to the glorious crown of your saints; through Jesus Christ our Lord, who lives and reigns with you and the Holy Spirit, one God, for ever and ever. Amen. 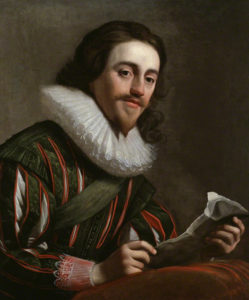 Charles Stuart was born in November of 1600, the second son of Anne of Denmark and James IV of Scotland. When he was eighteen, his elder brother died, and Charles took his place in the royal succession. Charles I became the king of England upon his father’s death in March of 1625.

As king, Charles did not get along with Parliament. They wanted a Protestant queen to bear a Protestant heir; Charles didn’t listen. He married Henrietta Maria, a Roman Catholic French princess, in May, 1625.

Meanwhile, the Thirty Years’ War was raging across Europe, pitting Protestants against Catholics, so his subjects expected Charles to despise the Catholic countries out of patriotism. Charles fought Catholic Spain but kept running out of money and raising taxes, which did not help national morale.

In 1633, Charles appointed William Laud as Archbishop of Canterbury. Together, they pushed for liturgical reforms, including many that are familiar practices to us today, such as adherence to the prayer book rubrics, use of vestments and candles, and the institution of the altar rail. To a large extent, Charles and Laud shaped Anglicanism in the way that we experience it today.

Yet his marriage, wars, and religious changes combined to create a toxic environment for King Charles. The English populace wondered if their king was Protestant or Catholic. Unrest grew. Charles’s refusal to convene Parliament for eleven years threw the country into civil war. Charles was captured in May, 1646. He was tried on charges of treason and other “high crimes” and was executed on January 30, 1649.

At his execution, one historian records that the crowd was overcome with grief and pushed forward to dip their handkerchiefs in his blood as relics. It was commonly thought that Charles was offered his life in exchange for abandoning the historic episcopate, yet he refused. Despite some failures as a monarch, he preserved the historic episcopate in Anglicanism, and ironically, may have enabled the Church to survive the English Civil War.

Collect for Charles I
Blessed Lord, in whose sight the death of thy saints is precious; We magnify thy Name for thine abundant grace bestowed upon our martyred Sovereign; by which he was enabled so cheerfully to follow the steps of his blessed Master and Saviour, in a constant meek suffering of all barbarous indignities, and at last resisting unto blood; and even then, according to the same pattern, praying for his murderers. Let his memory, O Lord, be ever blessed among us; that we may follow the example of his courage and constancy, his meekness and patience, and great charity...And all for Jesus Christ his sake, our only Mediator and Advocate. Amen.

Margaret of Scotland vs. Charles I

342 comments on “Margaret of Scotland vs. Charles I”