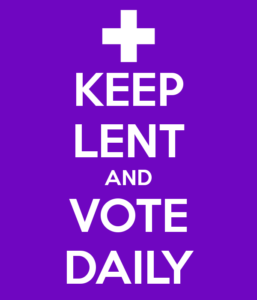 Thursday” has arrived. Over the next (more or less) 40 days and 40 nights, you will have the opportunity to re-immortalize one of our 32 competing saints with the coveted Golden Halo.

Today we see two heavyweights facing off in the Apostolic Rumble. Will we rob Peter to pay Paul or will Paul get robbed to pay Peter? That, dear friends, is up to you and your single (we mean that and we have spies everywhere) vote.

If you’re new to Lent Madness, welcome! If you have any questions about how to participate, just let us know by leaving a comment. The Lent Madness community is both friendly and helpful, often answering questions before the Supreme Executive Committee arrives in their grand purple, if imaginary, chariot. You can view and/or print out the full bracket of saints by clicking here.

We urge you to take full part in the Madness. Leave comments here on the website. Read what others have to say. Enjoy the friendly rivalry and trash talk on social media. Do additional research. During the day, check in on the website often to see how each day’s contest is going. And above all, delight in seeing how each saint was a powerful witness of Jesus Christ.

We can assure you this will be a wild, joyful, educational, ocassionally gut-wrenching ride. We’re delighted to share this journey with you. Let the Madness begin!

The disciple who makes us all feel better about our failures, Saint Peter was one of the twelve apostles of Jesus. Peter is traditionally considered the first bishop of Rome—or pope—having been ordained by Jesus who dubs him the “rock of the church.” Originally, Peter was named Simeon, often simplified to Simon in modern English. Peter was married and originally worked as a fisherman with his brother, Andrew. In fact, Andrew introduced Peter to Jesus and gave him the name Cephas (Peter), which means rock.

Peter was a leader among the disciples and witnessed events seen by only a few apostles, such as the Transfiguration and the raising of Jairus’s daughter. According to the gospels, Peter confessed Jesus as the Messiah, then denied knowing Jesus three times under threat of arrest, and then felt shame and remorse over his betrayal. After Easter, Jesus forgave him his failure and implored Peter to “feed my sheep.”

At the start of the Acts of the Apostles, Peter emerges as an effective leader of the early church. He preached with authority at Pentecost, began to work miracles, and participated in the council at Jerusalem. Historical witnesses confirm his later presence in Rome, although they do not verify the legendary story of his martyrdom. According to this tradition, under Emperor Nero, Peter was crucified upside down. He requested this unusual method of execution out of humility, not wanting to be killed in the same manner as Jesus. Hence, in Christian symbology, Peter is often represented by an upside-down cross, along with the keys to God’s kingdom. The Vatican claims Peter’s remains are housed beneath Saint Peter’s Basilica.

St. Peter’s feast day is June 29, and he is the patron of fishermen, net makers, and shipbuilders.

Collect for Peter
Almighty Father, who inspired Simon Peter, first among the apostles, to confess Jesus as Messiah and Son of the living God: Keep your Church steadfast upon the rock of this faith, so that in unity and peace we may proclaim the one truth and follow the one Lord, our Savior Jesus Christ; who lives and reigns with you and the Holy Spirit, one God, now and for ever. Amen. 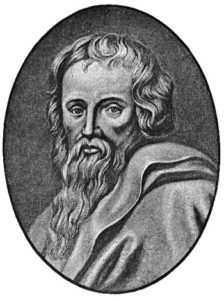 Behind Jesus Christ himself, perhaps no person has shaped the face of Christianity more than Paul of Tarsus—the pharisaic persecutor of the church turned apostle and the primary writer for a majority of the New Testament.

Paul, as an ardent and educated Pharisee, was dedicated to what (at Jesus’ time) was a somewhat new belief—that the law given in Torah could be applied to everyday activities to sanctify the course of ordinary life. As such, Paul’s early interactions with followers of Jesus were as a persecutor, seeking to restore the norms of pharisaic dogma to the followers of the sect known as “The Way.” But Paul underwent a dramatic conversion experience along the Damascus road. He saw Jesus, who addressed him by his Hebrew name, asking “Saul, Saul, why do you persecute me?” Blinded by this vision, Paul’s sight was restored by Ananias, and a transformative ministry began.

Paul’s message in his epistles speaks to the transformative power of God’s grace, revealed in Jesus, crucified and risen from the dead. Having experienced grace in his conversion, Paul argues that the grace of God is extended to all—Jew and Gentile alike. As he writes in the Epistle to the Galatians, social distinction must break down when all become part of the body of Christ: “There is no longer Jew or Greek, there is no longer slave or free, there is no longer male and female; for all of you are one in Christ Jesus.” As the Apostle to the Gentiles, he was at times in direct and fierce conflict with Peter; Paul argued with Peter for the inclusion of Gentiles in the table fellowship of the earliest church. Using the privileges Roman citizenship afforded him, Paul traveled widely to preach the gospel: His journeys took him across the Middle East, Asia Minor, and eventually to captivity in Rome. Paul died in Rome, still longing to travel to more communities with the good news of Jesus Christ.

Collect for Paul
O God, by the preaching of your apostle Paul you have caused the light of the Gospel to shine throughout the world: Grant, we pray, that we, having his wonderful conversion in remembrance, may show ourselves thankful to you by following his holy teaching; through Jesus Christ our Lord, who lives and reigns with you, in the unity of the Holy Spirit, one God, now and for ever. Amen.

UPDATE: At 7:58 p.m. Eastern time, the SEC removed 254 votes from Paul. We found that someone in Little Rock, AR had voted for Paul repeatedly. This is a reminder that you should vote -- and tell your friends to vote -- but once only.