Phoebe vs. John the Evangelist

Today in Lent Madness, two Biblical-era saints face off as Phoebe goes up against John the Evangelist. Will a woman who played an integral role in the early church prevail or will the author of the fourth Gospel advance?

In yesterday's action, Anna Alexander defeated Peter Claver 59% to 41% to advance to the Saintly Sixteen against the winner of John Wesley vs. Edith Cavell. This was fueled in part by the Episcopal Diocese of Georgia's unflagging support for one of their own. They even produced a video celebrating Anna's ministry which is worth your time whether or not you voted for her.

Finally, in case you somehow missed yesterday's stirring edition of Monday Madness, you can watch it here. Every week Tim and Scott wax eloquent on all things Lent Madness, keeping the Lent Madness faithful up-to-date on the latest news. It is indeed must-see penitential TV. 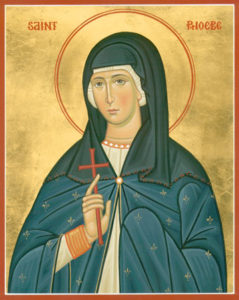 All that we know about Phoebe of Cenchreae comes from two short verses at the end of Paul’s letter to the churches in Rome. Notwithstanding such scant reference, she was quite an important figure and was key to interpreting the message of what many see as Paul’s most important letter.

Phoebe was likely a former slave and a Gentile convert. In spite of her humble beginnings, she rose to prominence as a freedwoman. Paul describes her as a “benefactor of many,” including himself. She probably supported the church in Cenchreae (a port about seven miles southeast of Corinth), perhaps even hosting the church in her house. In the letter to the Romans, Paul implies that she is functioning as his partner and currently supporting his mission to Spain.

Paul also describes Phoebe as a deacon. While formal offices were yet to be established when Paul was writing, the use of deacon in reference to Phoebe suggests that she was not only a financial supporter of the church but also a leader in the congregation. Her role included preaching and tending to churches, and Paul sent her as a missionary to Rome.

Paul’s confidence in Phoebe is perhaps clearest in the fact that he sent her as the bearer of the Letter to the Romans. Phoebe did not function as some glorified mail woman. As the deliverer of the letter, Phoebe had the responsibility to read the letter to the congregations and to help them understand what Paul was trying to say (modern interpreters of Paul know what a difficult task this could be). This was an enormous responsibility: Paul, writing to churches that he has never met and that likely had some misgivings about him, trusted Phoebe to be his faithful emissary.

Given that we still read Paul’s letter to the Romans to this day, it looks as though Phoebe was a wise choice.

Collect for Phoebe
Filled with your Holy Spirit, gracious God, your earliest disciples served you with the gifts each had been given: Phoebe as a deacon who served many. Inspire us today to build up your Church with our gifts in hospitality, charity, and bold witness to the Gospel of Christ; who lives and reigns with you in the unity of the Holy Spirit, one God, now and for ever. Amen. 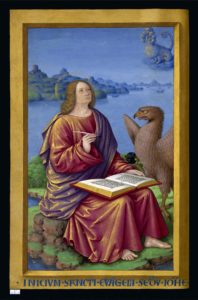 John the Evangelist is the name traditionally given to the person who wrote the fourth canonical gospel. He is likely an amalgam of a few Johns present in New Testament scripture: John the Apostle, John the Revelator, and John the Presbyter. What matters most when it comes to John the Evangelist is not his historicity but rather the tradition that informs and sustains his identity.

As one of the sons of Zebedee (the so-called “Sons of Thunder”) and brother of James, John is a fisherman turned fisher-of-men. The gospels also reveal to us that John formed the triad of Jesus’ closest disciples along with Peter and his brother James. This triad was present both when Jesus raised Jairus’s daughter and during the Transfiguration. Christian tradition describes John as the “disciple Jesus loved,” which suggests a close relationship with Jesus. John is the one who takes the Blessed Virgin Mary into his care during and after the crucifixion and is among the first disciples to understand the significance of the empty tomb.

After the ascension of Jesus Christ, John is found in several places in the Book of Acts, including healing the lame man outside the beautiful gate, testifying before the Sanhedrin, and conveying the gift of the Holy Spirit to new converts through the laying on of hands. Tradition suggests that John was eventually exiled to Patmos, where he recorded his ecstatic visions in what we now know as the “Revelation to John” or “John’s Apocalypse”(commonly referred to as the Book of Revelation). Of the original twelve apostles, John is the only one to live to an old age and not die a martyr’s death.

John is often depicted in art holding a chalice with a serpent in it, which is likely tied to his willingness to drink from the cup Jesus was to drink from. There is also a legend that suggests that at some point during John’s ministry, someone passed him a chalice filled with poisoned wine. As John said a blessing over the cup, the poison rose from the cup in the form of a snake.

Collect for John the Evangelist
Shed upon your Church, O Lord, the brightness of your light, that we, being illumined by the teaching of your apostle and evangelist John, may so walk in the light of your truth, that at length we may attain to the fullness of eternal life; through Jesus Christ our Lord, who lives and reigns with you and the Holy Spirit, one God, for ever and ever. Amen.

Phoebe vs. John the Evangelist

276 comments on “Phoebe vs. John the Evangelist”