Isidore the Farmer vs. Phocas the Gardener

Happy Monday! We're back for another full week of saintly action and we kick things off with with the long-anticipated agricultural anarchy as Isidore the Farmer faces off against Phocas the Gardener. [insert comment about reaping what you sow]

In case you forgot about Friday's matchup, Michael the Archangel defeated Anna the Prophet 53% to 47% to advance to the Saintly Sixteen where he'll face Esther.

Finally, in the shout-out department, we're pleased to share an article titled St. Albans Participates in Lent Madness that appeared in the Eureka-Times Standard. Congrats to the Rev. Nancy Streufert and the folks at St. Alban's Church in Acarta, California! Lent Madness is HUGE in the Redwood forest. 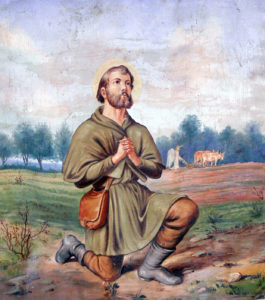 Isidore was a prodigious farmer who credited the wealth of his harvests to angels who worked by his side. Born in Madrid, Spain, in about 1070, Isidore was a poor laborer for Juan de Vargas, a wealthy landowner. While Isidore spent his life working the land for others, he was always generous, sharing all he had with the poor.

Saintly lore tells us that Isidore is credited with more than 400 miracles. In addition to bringing an abundance of agricultural bounty for the de Vargas family, Isidore also is said to have brought de Vargas’s daughter back to life.

Another story tells of a beggar who arrived at Isidore’s home seeking food. Isidore’s wife, Maria, told the beggar that there was no more stew in the pot. As the beggar turned away, Isidore called out to his wife to check again. On further inspection, the pot of stew miraculously refilled. Legend also recalls that after Isidore and Maria’s only son fell into a well, Isidore prayed that the waters would rise and his son would be saved. The waters responded to his prayers, and Isidore’s son was rescued from drowning.

According to another legend, fellow farmhands complained that Isidore was always late for work because he went to worship first. The master investigated and found an angel plowing the field while Isidore was praying.

The story of Isidore the Farmer teaches us about the holiness of hard work and the value of labor. Through Isidore’s witness, we see that real abundance is not found through monetary wealth; dignity and holiness can be discovered in an ordinary life dedicated to God. Through our labors, we can also find a relationship with God as the toil of our hands takes care of our fellow humans.

According to legend, a flood nearly one hundred years after Isidore’s death uncovered his body, which was found to be in a state of incorruptibility, meaning it had not undergone normal decomposition. The church has viewed incorruptibility of the body as a sign of sainthood. Isidore the Farmer, the patron saint of farmers and laborers, is celebrated on May 15.

Collect for Isidore the Farmer
God of harrow and harvest: Look with favor upon us as we work wholeheartedly in our ministries that we, like our brother Isidore, might plow alongside unseen angels, find our dinner tables laden with enough to share, and joyfully work toward making your kingdom come on earth; we pray this in the name of the Great Sower of Seeds, Jesus Christ, your son. Amen. 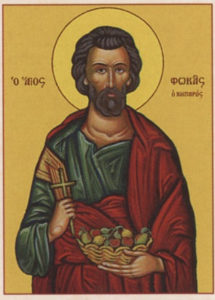 While our spiritual imagination may draw us to Eden or Gethsemane when we think of gardens, it is quite possible that the small garden of Phocas best illustrates the call to self-sacrificing love given to disciples of Jesus.

Phocas’s garden was part of his first-century, modest, hermetic life outside the gates of Sinope, a town on the southern coast of the Black Sea. The garden was Phocas’s livelihood and his ministry. He lived by selling produce, while also using the garden’s abundance to feed the needy and hungry. At the heart of Phocas’s generosity was his Christian faith, which he sought to share with others just as fully as he shared food from his garden and resting places in his home.

During the Diocletian Persecution, Phocas’s acts of generosity drew scrutiny from the authorities. Soldiers were sent with orders to kill him. Arriving at Sinope, they found the city gates closed. Seeking lodging, they ultimately came to the hermit’s home, where they asked for his assistance in tracking down their target. Without revealing his name, Phocas did for the soldiers what he did for all guests: he received them, fed them from his garden, and gave them shelter in which to sleep in his home. He promised to lead them to the man they sought in the morning.

As they slept, Phocas dug a grave for his burial in the midst of the garden and made arrangements for the distribution of his goods to the poor. In the morning, Phocas revealed his identity and charged the soldiers to fulfill their duty. The soldiers, shocked by the act of hospitality shown by the one they were charged with killing, begged Phocas to recant his beliefs, allowing them to report a fruitless search. It was only when Phocas proclaimed that it was an honor to share in the sufferings of Jesus that the soldiers carried out their charge. Phocas was buried in the midst of his own garden, the place where he had provided unremitting hospitality to friend and enemy alike.

Collect for Phocas the Gardener
Almighty God, you emptied yourself to take on the form of a servant, and you call your disciples to do the same. Kindle in our hearts the same love you bestowed upon Phocas the Gardener, that, in giving of our abundance to serve friend and enemy alike, we may reflect to the world around us the abundant generosity you show to us in your Son Jesus Christ, Our Lord, who lives and reigns with you and the Holy Spirit, one God, now and for ever. Amen.

Isidore the Farmer vs. Phocas the Gardener

Phocas the Gardener: By Anonymous [Public domain], via Wikimedia Commons

166 comments on “Isidore the Farmer vs. Phocas the Gardener”