In the penultimate battle of the first round, it's John of Beverley vs. Martin de Porres. The people of Beverley and of Porres have been agitating for this matchup for years -- it's a huge rivalry and hooligans are involved.

Yesterday, Phocas the Gardener maintained his focus in burying Isidore the Farmer 60% to 40%. He'll face Katharina von Bora in the Saintly Sixteen.

If you missed yesterday's episode of the award-winning (in the SEC's own mind) Monday Madness, watch it here. And then, as punishment for missing it, watch it again. 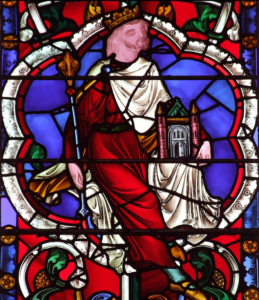 John of Beverley has a posse.

John was bishop of Hexham, then of York, England, where he was renowned for his preaching and dedicated to his students. He founded a monastery in Beverley, where he later retired and died in 721. Beverley became an important ecclesiastical center in John’s day and thrived after his death largely because of his cult following. He was canonized in 1037 by Pope Benedict IX.

But while John was at one time one of the most celebrated medieval English saints, his popularity since has waned. Little is known about his early life. None of his writings remain.

In fact, John probably is remembered best by the influence he had on others. Among his posse are Berthun, the first abbot of Beverley; Saint Wilfrid the Younger, who followed John as bishop of York; and, most notably, Saint Bede the Venerable, who was ordained by John and recorded a number of stories about him in his Ecclesiastical History of England.

“Those that knew him well are wont to tell many miracles,” Bede wrote. That includes John healing a man with a scabby head who was able to speak for the first time and grow “hair curling in comely fashion.”

After his death, John also reportedly appeared to Julian of Norwich in a vision. She described him in The Showings of Julian of Norwich as “a very exalted saint, who is also a neighbor close at hand, and we are all acquainted with him.”

To Julian, the life of John of Beverley illustrated that “even some very serious sinners are honored by Holy Church here on earth and in heaven for all eternity.”

To the rest of us, his example is a reminder that we may never know the impact we have on others— those in our posses and those who cross our paths, and even those God touches through our legacies long after our earthly lives have ended.

Collect for John of Beverley
God of time and space, you have called each of us to holy tasks and given us companions for our journey: Look with favor upon us, and grant that like your servant John of Beverley, we may be good stewards for our friends and family and living examples of your love and mercy, so that when the account of our lives is given, we may be found to have befriended your Son our Lord Jesus Christ in each face we have greeted. In Christ’s name, we pray. Amen. 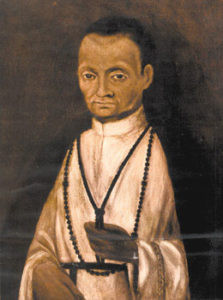 Martin de Porres Velázquez experienced many challenges at the hands of others, but he transformed his hardships into ministry and a lifelong commitment to providing aid to the downtrodden.

Martin hailed from Peru, where he was born on December 9, 1579. He and his sister were considered illegitimate children—their mother was a freed slave and their father was a Spanish nobleman who abandoned the family when he saw the children’s dark skin. Martin endured a life of bullying and abuse. Limited by certain social mores, Martin turned to a trade that his status in life would allow, training as a barber and a surgeon.

He aspired to join the Dominicans, but at the time, they did not allow brothers with such a background as Martin—his dark skin and illegitimate birth. Undaunted, Martin became a lay helper to the Dominicans at age fifteen, starting as a donado, a volunteer who lived in the community, wore the habit, and carried out menial, unwanted tasks.

In time, however, after witnessing Martin’s deep Christian faith and ministry, the Dominicans dropped the rule that “no black person may be received to the holy habit or profession of our Order.” Martin professed his religious vows to the Dominicans in 1603 at the age of twenty-four.

Martin was zealous in his work for those who had no hope. He established orphanages and hospitals and ministered tirelessly to the poor and the forgotten. His caring and compassion for the sick were well-known and highly regarded. According to tradition, Martin also exhibited miraculous behavior, from providing instant cures to having the ability to fly.

Collect for Martin de Porres
Merciful God, you sent your Gospel to the people of Peru through Martin de Porres, who brought its comfort even to slaves. Help us to follow his example in bringing fearlessly the comfort of your grace to all downtrodden and outcast people, that your Church may be renewed with songs of salvation and praise; through Jesus Christ, who with you and the Holy Spirit lives and reigns, one God, now and for ever. Amen.

John of Beverley: By Loole (self) (Self-photographed) [Public domain], via Wikimedia Commons

216 comments on “John of Beverley vs. Martin de Porres”