Lent Madness is back for an another action-packed week and so is the Saintly Sixteen. Today Maria Skobtsova faces Quiteria. Russian nun vs. nonuplet warrior. To get to this round, Maria defeated Thomas à Kempis and Quiteria bested Genesius (remember him?).

If you've forgotten what happened last Friday, which seems hard to imagine since the weekend was one hour shorter than usual, Richard Hooker defeated Margaret of Scotland 64% to 36% to advance to the Elate Eight against the winner of Phocas the Gardener vs. Katharina von Bora. 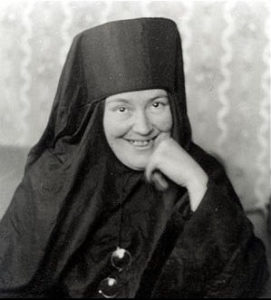 Maria Skobtsova was a Russian nun living in Paris who helped the poor and fought Nazis. She also had one of the most action-packed lives of the modern saints. To wit:

In her early life, she was a poet, and wrote several books, one entitled “Scythian Shards.

At the end of the Russian Revolution, she took part in the All-Russian Soviet Congress, as a delegate of the Social Revolutionary Party. She wrote about the experience in dire terms, including being dismissed by Trotsky’s lieutenant who told her “Your role is played out. Go where you belong, into history’s garbage can!” On her way home, she was nearly executed several times, and that experience seals her dissatisfaction with revolutionary politics. She wrote, “My loyalty was not to any imagined government as such, but to those whose need of justice was greatest: the people. Red or white [the two sides in the revolution] my position is the same—I will act for justice and for the relief of suffering. I will try to love my neighbor.”

In 1926, her daughter Anastasia dies of influenza, which prompted the end of her marriage. But Maria ended up working with the poorest of the poor in Central Paris. Rather than letting her successive tragedies destroy her, she felt she saw “a new road before me and a new meaning in life, to be for all, for all who need maternal care, assistance or protection.”

When she opened the care house for refugees and the impoverished in Paris, she had a hard time finding nuns and clergy who were able to keep up with her, both because of her refusal to cooperate with the Nazis, and because of her unorthodox methods. Two nuns left soon after arriving, declaring the establishment “a monastic Bohemia.” The metropolitan of the region reflected later, “She was a very unusual nun in her behavior and her manners. I was simply staggered when I saw her for the first time in monastic clothes. I was walking along the Blvd. Montparnasse and I saw: in front of a cafe, on the pavement, there was a table, on the table there was a glass of beer, and behind the glass was sitting a Russian nun in full monastic robes. I looked at her and decided that I would never go near that woman. I was young then, and held extreme views.”

To say she disagreed with Hitler would be an understatement. When the Nazis took Paris, the Russian refugees living in the city were a particular target of theirs, because they were considered allies of Russia—an Allied power. Russian emigres were routinely rounded up if their identity cards marked them as non-French. However, Mother Maria and Father Dimitri (her chaplain) refused to comply with the carrying of identity cards, even when they were warned that to do so would be courting deportation. Maria said of her decision, “There is not only a Jewish question but a Christian question. Don’t you realize that this battle is being waged against Christianity? If we were true Christians, we would all wear the Star. The age of confessors has arrived.” She often said if the Nazis knocked on her door and asked her to hand over the Jews, she would produce an icon of the Blessed Virgin Mary.

Details of her last hours in Ravensbruck concentration camp are unclear. Witnesses’ reports vary: She was either chosen for the gas chamber, or volunteered to go in someone else’s place. She, Father Dimitri, and her adult son, Yuir, who also worked in the home, died as well. 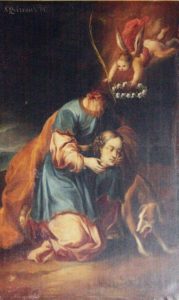 Quiteria is a saint and martyr from the early centuries of the church about whom little is known beyond the legends that are held by the communities that have been most inspired by her witness.

Portuguese observances of Quiteria provide among the most far reaching accounts and legends of her life and ministry. This includes her work with her sisters Eumelia, Liberata, Gema, Genebra, Germana, Basilissa, Marcia, and Vitoria. When their nonuplet sisterly powers combined, they became a squad of warriors – freeing Christian prisoners and engaging in guerilla warfare against the persecutory Roman Empire.

Quiteria’s martyrdom is also an epic legend in its own right. The sisters’ guerilla campaign ultimately came to an end when, according to one legend, Quiteria was captured, beheaded, and thrown into the ocean, allowing her sisters to escape. When guards were sent to capture her sisters, Quiteria emerged from the ocean, holding her own head, warning off the Roman guards from their pursuit.

While the idea of a nonuplet guerilla warfare squad may be inaccessible to many, those who teared up in the final scenes of Old Yeller can find a different point of connection to Quiteria. Legend holds that after her capture and before her death, the power of her voice alone managed to keep an official’s two rabid dogs under control and at bay. For doing so, she is often considered the saint whose prayers are to be invoked against the bites of rabid and mad dogs. For doing so, artwork often depicts her holding a dog on a leash, or as protecting the vulnerable from harm from rabid dogs.