LM @ GC Play-In: James the Great vs. James the Less

Everything's bigger in Texas. That's what people keep telling us as the Episcopal Church gathers for its triennial General Convention in Austin. Since the Supreme Executive Committee believes nothing is bigger than Lent Madness, we fit right in here!

We have a Texas-sized play-in match taking place TODAY as James the Great battles James the Less in a winner-take-all throw-down to become the first saint to crack the 2019 Lent Madness bracket. You can vote in one of two ways: online here OR by casting a special purple ballot at the Forward Movement booth in the Exhibit Hall. Polls will be open from 8:00 am to 5:00 pm Eastern time today only. It's a short window, so cast your vote and tell all your friends to get to the polls! (as always, we encourage voting early but not often).

If you're in Austin, stop by the Forward Movement booth to meet Tim and Scott, take a selfie with an actual golden halo, and register your complaints about past and future brackets (which the SEC will "take under advisement"). For eagle-eyed attendees, you'll also have the opportunity to spy Distinguished Celebrity Bloggers/General Convention Deputies Laurie Brock, Megan Castellan, and David Sibley.

We're grateful to veteran Celebrity Blogger David Creech for writing bios for both James the Great and James the Less (everyone else was either on vacation, working at the Convention, or ignored our email).

You can take your cattle ranches and giant slabs of barbecue. Nothing's bigger than Lent Madness in July! 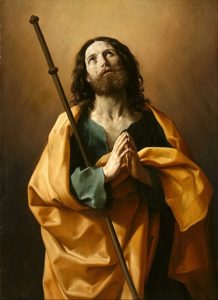 James the Great is the portrait of an imperfect saint. He is called “the Great” to distinguish him from “the Less.” The moniker denotes his prominence in the early tradition, not his superiority over the many other Jameses (if we’re honest here, James the Just has to take the cake).

James is the older brother of John. They were fishermen with their father Zebedee until Jesus called them to follow him (see Mark 1:19-20). Bucking convention, where the student seeks the master, James and John dropped everything to follow Jesus. James is given a special place in the Gospels as an early follower of Jesus and as one who is given special access. He, along with Peter and John, is one of the few witnesses to the raising of Jairus’ daughter (Mark 5:35-43), the Transfiguration (Mark 9:2-9), and Jesus’ agony in the Garden of Gethsemane (Mark 14:32-42).

In spite of this privileged place, James often exhibits weakness and lack of insight. He gives all of us hope. He and his brother are called “Sons of Thunder,” presumably because of their impetuousness. (Later hagiographers would say they were given the name for their thunderous, and effective, preaching.) In the Gospel of Luke, when a Samaritan village does not welcome Jesus, James and John ask if they should call fire from heaven to consume the village (Luke 9:51-56). James, with Peter and John, doesn’t understand the Transfiguration. He falls asleep while Jesus agonizes in the Garden. When Jesus tells his followers he must be rejected, condemned to death, mocked, and crucified, James and John reply by asking if they can be seated at his right and left hand in power (see Mark 10:32-40). According to Mark, James flees the crucifixion scene.

In the Gospel tradition, James’ name always precedes John’s. Curiously, once Luke begins to tell his tale in Acts, James disappears while Peter and John act as the most prominent leaders of the nascent movement. This is perhaps because James, as the first martyr for the Jesus movement, was killed by Herod in the early 40s (see Acts 12:2). In a story recounted by Clement of Alexandria, James’ defense before Herod was so effective that the guard who was charged with watching him was converted and the two were killed together.

O gracious God, we remember your servant and apostle James, first among the Twelve to suffer martyrdom for the Name of Jesus Christ; and we pray that you will pour out upon your Church that spirit of self-denying service by which alone we may have faithful witness among your people; through Jesus Christ our Lord, who lives and reigns with you and the Holy Spirit, one God, now and for ever. Amen. 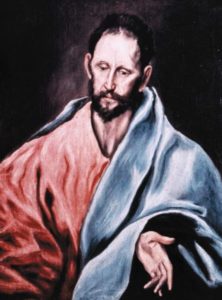 Little is remembered about James the son of Alphaeus. Part of the difficulty is the commonness of the name James in the New Testament. We have no less than four Jameses and often little more than their name. This confusion about the various Jameses has led to a conflation of these lesser Jameses into a single James the Less. Some affiliate him with Jesus’ brother and the leader of the Jerusalem community, James the Just, but this connection is difficult to maintain. His appellation, “the Less,” is derived from Mark 15:40, where the mother of James, the younger, is described as one of the women witnessing Jesus’ crucifixion. Again the connection here is tendentious.

To add insult to injury, his name is not even James. Through a strange twist of fate and the peculiarities of medieval pronunciation of Latin (and perhaps with a little help from the translation of the Bible commissioned by King James), his original name, Jacob, has been translated consistently in English as James for over four centuries.

In spite of this obscurity, James the Less was a member of Jesus’ closest circle. Although the lists of Jesus’ closest disciples vary from Gospel to Gospel, James is included in all the lists of the 12 and he is always listed first in the last group of four (see Matt 10:1-4, Mark 3:16-19, Luke, 6:13-16, and Acts 1:12-14). This prominence over the last group of four has led some to speculate that James the Less was particularly influential in the Jewish mission of the early Jesus followers. If this suggestion is followed, James the Less occupies an important position alongside Peter and Philip in the earliest movement. Peter heads the first list of four as prominent in the Jesus movement generally. Philip heads the second list of four as a leader in the Hellenistic community of believers.

Later tradition has that James traveled to Egypt and was eventually martyred there.

James the Great vs. James the Less