In a week full of lopsided battles, yesterday's matchup took the A to Z prize as Zenaida routed Apollonia 81% to 19%. She'll advance to the Saintly Sixteen where she'll take on the winner of Nicholas of Myra vs. Rudolph of Gubbio.

Today, we round out the second full week of Lent Madness with another Biblical bracket buster as Ananias faces Photini.

In other news, the Supreme Executive Committee was shocked to learn this week that there is another bracket-style tournament making the rounds. But instead of saints, this one features college basketball teams. What is this...madness?! Fear not, friends. The Lent Madness Legal Team is looking into all of our available options. Stay tuned.

Next week, we'll finish up the Round of 32 and kick off the Saintly Sixteen on Thursday. But first, enjoy some sabbath time as we collectively rest from our voting labors through the weekend. Don't worry, though, we'll be back first thing Monday morning as Damien of Molokai faces Pandita Ramabai. 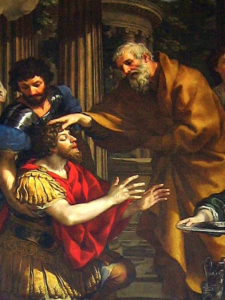 As a general rule, if we find that our lives of prayer and discipleship only lead to places of personal comfort and safety, then it’s quite likely we aren’t listening to God as closely as we should. In heeding the call of Jesus, Ananias of Damascus abandoned his own safety to receive, heal, and instruct the man who can be called Christianity’s most significant convert: Saul of Tarsus–Saint Paul, the apostle to the Gentiles.

The Acts of the Apostles records the call of Ananias. Jesus appears to him in a vision, calling Ananias to leave the safety of his home in Damascus and “look for a man of Tarsus named Saul.” Ananias knows of Saul’s vigorous persecution of the church in Jerusalem and argues with God: “Lord, I have heard from many about this man, how much evil he has done to your saints in Jerusalem; and here he has authority from the chief priests to bind all who invoke your name.” But Jesus tells Ananias to go anyway, “for he is an instrument whom I have chosen to bring my name before Gentiles and kings and before the people of Israel” (Acts 9:11-15).

Ananias does as he is told. He finds Saul of Tarsus, blinded from his own encounter with Jesus on the Damascus Road, at the home of a man named Judas in Damascus, just as Jesus has told him. Ananias recounts his own call to seek out Saul so that Saul may regain his sight and be filled with the Holy Spirit. Saul’s sight is restored—“something like scales” fall from his eyes—and almost immediately thereafter Saul is baptized. Within days, Saul preaches with great eloquence to the power of Jesus in the Damascus synagogue, raising more than a few eyebrows among those who knew of his former life.

The story of Paul’s ministry occupies the majority of the Acts of the Apostles; Paul’s letters to the church communities constitute the bulk of the New Testament. Today’s church would not exist in its current form without Paul. But Paul’s journey as an apostle begins with the courage and faithfulness of Ananias, a disciple and follower of Jesus who heeds a call to go and pray with a man he only knows as a danger and a threat. Ananias’s extraordinary witness and courage commends him as an example for us to follow nearly two millennia later.

Collect for Ananias
Almighty God, whose will it is to be glorified in your saints, and who raised up your servant Ananias of Damascus to be a light in the world; Shine, we pray, in our hearts, that we also in our generation may show forth your praise, who called us out of darkness into your marvelous light; through Jesus Christ our Lord, who lives and reigns with you and the Holy Spirit, one God, now and for ever. Amen. 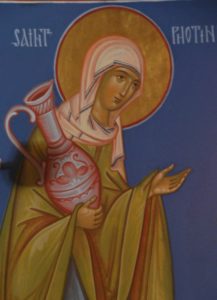 “So he came to a Samaritan city called Sychar, near the plot of ground that Jacob had given to his son Joseph. Jacob’s well was there, and Jesus, tired out by his journey, was sitting by the well. It was about noon. A Samaritan woman came to draw water, and Jesus said to her, ‘Give me a drink’” (John 4:5-7).

These words begin the longest conversation Jesus has with another person in the gospels. The woman at the well isn’t named in the Gospel of John; we are given her gender (woman), her ethnicity (Samaritan), and her personal information (not what we’d call an upstanding citizen).

All the labels are warnings: This is not a person with whom Jesus should be talking. Yet Jesus does speak with her, and in response, she becomes a disciple and evangelist. We read in the Gospel of John that many Samaritans from that city believe in Jesus because of her testimony.

We don’t encounter her again in the gospels, but the early church continues her story. Baptized on Pentecost with her sisters and given the name Photini (luminous or enlightened one), she travels to Samaria and eventually Carthage, where her witness founds a vibrant Christian community.

Photini encounters Jesus in a vision, and subsequently travels from Carthage to Rome to bolster the courage of the persecuted community of Christians and share the gospel with Nero, the emperor. Instead of being converted, Nero orders Photini and the Christians beaten on the hands with iron rods. During the torture, Photini sings psalms. Seeing their hands unharmed, Nero throws the men into jail and invites Photini and her sisters to a grand banquet, hoping the display will entice Photini to rebuke her Christian faith. Photini shares the gospel with Nero’s daughter and converts her. Enraged even more, Nero further tortures Photini, then throws her into a well, where she praises God until she dies.

Sermons in the early church refer to her as an apostle and evangelist, standing equal to the twelve who go forth after the resurrection. Her faith is commemorated in many ancient hymns, including this verse from one associated with Ephrem:

Blessed are you, O Woman, drawer of ordinary water, who turned out to be a drawer of living water. You found the treasure, the Source from whom a flood of mercies flow.

Collect for Photini
O Almighty God, whose most blessed Son revealed to the Samaritan woman that He is indeed the Christ, the Savior of the World; grant us to drink of the well that springs up to everlasting life that we may worship you in spirit and in truth through your Son, Jesus Christ our Lord. Amen.

175 comments on “Ananias vs. Photini”