In yesterday's Clash of the Consonants,  Gobnait stung Hrotsvitha 66% to 34% to advance to the Saintly Sixteen. She'll face the winner of Paula of Rome vs. Marcella of Rome.

Here at Lent Madness, we like to say we cover the saints from A to Z. Okay, we've never said that. But if we did, today's matchup would be Exhibit A (to Z). Because we have Apollonia vs. Zenaida -- two early Christian followers of Jesus -- and, in the saintly world, you don't get much more A to Z than that! 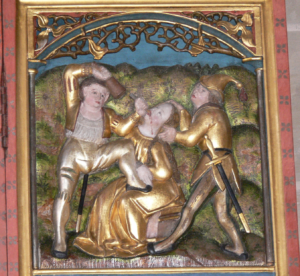 Apollonia was a Christian martyr, killed in a local uprising in Alexandria, in the year 249 ce. Scant information is to be found about her life, but her death is well-documented. Historians note that the reign of Philip the Arabian was not the most tranquil for the Roman Empire. During the celebrations of the anniversary of the founding of Rome in 248, a crowd arose in Alexandria that was overcome with nationalistic feelings. In their fervor, they began attacking local Christians as traitors to the emperor.

Dionysius, the local bishop, wrote a letter to Bishop Fabius of Antioch, documenting the attacks; the letter later became part of Eusebius’s Ecclesiastical History, which provides an account of the development of early Christianity. Dionysius describes a general panic in the city, with Christians fleeing to safety if they have the means. Apollonia, however, does not flee and is attacked by an angry mob who punch out all her teeth. The crowd then threatens to burn her alive if she does not echo their denunciation of Christ. Thinking quickly, Apollonia asks to walk a little ahead of her captors, in order to think about her choices, and when they let her go, she throws herself into the fire. She dies rather than give up her faith.

While the story of Apollonia is unfamiliar to us today, it is significant that Dionysius describes Apollonia as “parthénos presbytis.” It can be literally translated as “elder virgin” and seen as a descriptor of Apollonia’s agedness or an explanation for why she didn’t flee the city. Some modern scholars also think the term may denote ordained leaders of the early church. It is therefore possible that Apollonia was an early ordained leader martyred for her faith.

In art, Apollonia is depicted holding a pair of pincers in which a tooth is held. She is the patron saint of dentistry and those who suffer from toothaches because of her unfortunate dental torment right before her death. Her relics are located at the church that bears her name in Rome, as well as in Antwerp, Brussels, Mechlin, and nearly every other major city in Europe. Devotion to Saint Apollonia and fascination with her tooth-healing abilities was widespread during the Middle Ages, perhaps because of the sad lack of flossing.

Collect for Apollonia
Almighty God, by whose grace and power your holy martyr Apollonia, triumphed over suffering and was faithful even to death: Grant us, who now remember her in thanksgiving, to be so faithful in our witness to you in this world, that we may receive with her the crown of life; through Jesus Christ our Lord, who lives and reigns with you and the Holy Spirit, one God, for ever and ever. Amen. 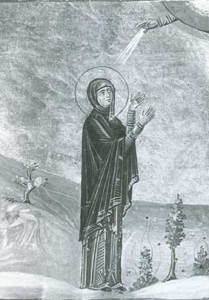 Zenaida and her sister Philonella were born of a Jewish family in the city of Tarsus around 100 ce. They were baptized into the faith following the evangelism of their brother Jason. They are known in the Orthodox Church as the earliest female physicians to follow Saint Luke in their ministry of the sick, and they were known as “unmercenary” healers, refusing to take payment from their patients for their services.

Like many early saints and biblical figures, little is known about Zenaida. She is thought to come from a well-educated Jewish family with ties to Paul the Apostle. Her brother Jason was one of the first bishops of the church in her native city of Tarsus. Truly, Zenaida and Philonella were descendants of the first members of Christ’s church. They could be considered Christian royalty, if you will. We can also deduce Zenaida was intelligent and well-educated, as she attended formal schooling to study medicine.

Zenaida was particularly known for her care of children, those with depression, and psychiatric disorders. The sisters combined a love of medicine with the love of God and preached Christ’s love in concert with their healing practices. They believed that salvation in Christ brought some of the most significant healing to their patients. As a result of their ministry, the church named Zenaida and her sister as “Friends of Peace.”

Some accounts say that Zenaida and her sister were stoned to death, while some say they both died peacefully in service to God. Other accounts say Zenaida died after stepping on a nail.

Collect for Zenaida
Merciful God, whose most dear Son came to heal the sick, raise the dead, cast out demons, and preach the gospel to the poor; Teach us by the example of your servant Zenaida to freely give even as we have freely received; through Jesus Christ our Lord. Amen.

124 comments on “Apollonia vs. Zenaida”