Dominic vs. Marina the Monk

In yesterday's saintly action, Richard Allen defeated Hannah Grier Coome 61% to 39% to advance to the Saintly Sixteen, where he'll face William Wilberforce for a shot at the Elate Eight.

Today it's Dominic vs. Marina the Monk in this intriguing battle of monastics. The winner of this matchup will square off against Ignatius of Loyola in the next round.

Yesterday's contest is, to our mind, one of the best things about Lent Madness (besides the swag in the Lentorium): Two lesser known saints with fascinating backstories amplified under the warm glow of the purple lights, to our collective inspiration and edification. Plus, while she didn't win, the electioneering by the Sisterhood of St. John the Divine in Canada on behalf of Hannah Grier Coome was something otherworldly (she was one of their early leaders). We encourage you to like their Facebook page, where you can see the good work they're doing and watch the slick (okay, heartwarming) campaign video they produced on Hannah's behalf. Nicely done, good sisters! 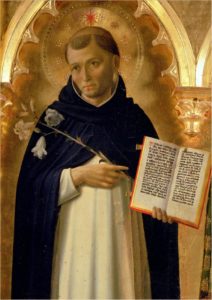 Born in Castille, Spain, in the twelfth century, Dominic became an Austin Canon (a priest following the rule of Saint Augustine) and lived in a religious community at the cathedral of Osma. In this role, he gained a reputation for both zealous scholarship and care for the poor. When forced to choose between the two, Dominic sold his books to help the infirm and needy.

As he moved up the church ranks, he traveled on diplomatic missions and in France, he met Cathars, members of a religious sect deemed heretical by the Roman Catholic church. Dominic understood that the only way to convert the Cathars was with missionaries who were both intellectually strong and living under a vow of poverty.

To that end, in 1215, he established the Order of Preachers in Toulouse, France, to supply the church with learned clergy who could travel two-by-two throughout Spain, France, and Italy. The newly founded Dominican Order had a democratic structure with superiors occupying positions of power for short terms. Support from several bishops as well as the pope were critical in Dominic’s success. By design, the Order of Preachers was also closely linked with universities all over Europe. Though he never converted the Cathars, the Dominican Order and Dominic’s ministry has transformed people throughout the ages.

Dominic died in Bologna in 1221 at the age of 51, worn out by his hard work, travel, and austerities. True to his vow of poverty, he was known to fast, wear threadbare clothing in winter, and refuse a bed. Iconography often shows Dominic with a lily, holding a torch, and with a black-and-white dog, which in Latin is a pun of the name domini canes (Dog of our Lord). He is the patron saint of astronomers because when he was baptized, his mother saw a star shining in his chest.

Although several Dominican friars became associated with the Inquisition, Dominic died before it began. However, the Spanish inquisitors had a painting made of Dominic as a sort of anachronistic justification of their actions, and Protestants ran with the characterization, using it to criticize the Dominicans of their day.

Collect for Dominic
Almighty God, Grant unto all your people a hunger for your Word and an urgent longing to share your Gospel, that like your servant Dominic we might labor to bring the whole world to the knowledge and love of you as you are revealed in your Son Jesus Christ; who lives and reigns with you and the Holy Spirit, one God, for ever and ever. Amen. 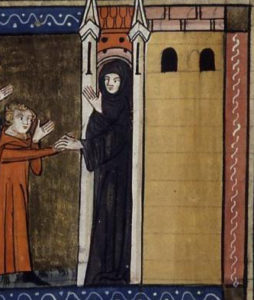 Before Joan of Arc led the French army to victory, Marina the Monk shaved her head and entered the monastery.

The details of Marina’s life are sketchy, but it’s generally believed she lived in the fifth or eighth centuries in Lebanon. Her mother died when she was young, and she was raised by her devout Christian father, who planned to retire to the Monastery of Qannoubine after she was married. When she was old enough to marry, Marina asked her father why he would save his own soul and “destroy” hers. He answered, “What shall I do with you? You are a woman.”

She immediately shaved her head, dressed herself in men’s clothing, and took the male name Marinos.

Seeing his child was serious, Marinos’ father was supportive, and the two entered the monastery together, sharing a cell there until he died. After that time, Marinos lived an increasingly ascetic life of fasting and prayer.

But that’s not what the monk is most remembered for.

Some time later, Marinos was traveling on business for the monastery and spent the night at an inn. The innkeeper’s daughter was raped, and when she became pregnant, her abuser told her to name Marinos as the child’s father.

The abbott confronted Marinos. Because the monk did not immediately offer a defense, the abbot took it to be an admission of guilt and forced Marinos to leave the monastery.

Marinos remained at the gates, living as a beggar and raising the child born to the innkeeper’s daughter. A number of years passed before the monks convinced the abbot to allow Marinos to return.

Marinos died at age forty after a brief illness. While preparing the body for burial, the monks were shocked to discover Marinos could not have fathered the child.

Unlike Joan of Arc, Marinos was not dismissed as a heretic or witch. Rather, all reportedly were convicted of how unjustly they had treated the pious monk. Another monk who was blind in one eye even claimed he miraculously recovered his sight during the funeral prayers.

Collect for Marinos
Teach us, Lord God, to refrain from false judgments about the sins of others, and to hold fast to our path of discipleship when we suffer unjustly because of judgments made by others. All this we ask in the name of Jesus Christ, our only mediator and advocate. Amen.

Dominic vs. Marinos the Monk

208 comments on “Dominic vs. Marina the Monk”