Welcome to the one and only Saturday matchup of Lent Madness 2019. Grab your coffee, cook up some Eggs St. Benedict, read about some saintly souls, and cast the third and final vote of the week. But first, an update on yesterday’s battle: William Wilberforce forced his way past Agatha Lin Zhao 59% to 41% to advance to the Saintly Sixteen, where he’ll square off against the winner of Hannah Grier Coome vs. Richard Allen.

Don’t forget, our online bracket is updated and filled in with the latest results each morning by Adam Thomas (along with his inimitable headlines) on our Bracket Page. This will come in especially handy in later rounds when you need a quick reference guide to refresh your memory on the brilliant earlier write-ups provided by our Celebrity Bloggers. If you’re curious about when your favorite saint will be competing, you can scroll down on the bracket page to check out the invaluable and handy Matchup Calendar.

Today we take our first stab at the Monastics & Martyrs side of the Bracket as Ignatius of Loyola faces off against Tikhon of Zadonsk. And we should note that, in a Lent Madness scheduling quirk, Distinguished Celebrity Blogger Megan Castellan has had a saint doing battle on the first three days of this new season – Mary, Wilberforce, and Tikhon. Whew!

So, go vote, don’t forget to set your clocks ahead an hour tonight, go to church on Sunday, (where you’ll tell everyone at coffee hour to join in the fun over at Lent Madness), and we’ll see you bright and early Monday morning as John Chrysostom squares off against Margaret of Cortona. 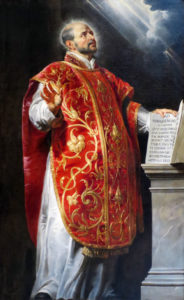 In 1521, few confused Íñigo López de Loyola for a saint. He was vain, enjoyed combat, and sought glory. While recovering from battle wounds, he longed to read about chivalry; he could only find books on the life of Christ and the lives of the saints. Íñigo followed the spirit of consolation he experienced with God and abandoned his plans for glory. It transformed his life and the life of the church. He is now known by the name he came to be called in his life and ministry—Ignatius of Loyola.

After his recovery, Ignatius made an extended retreat where he had mystical experiences and discerned a deeper call from God; this retreat inspired his great work, Spiritual Exercises, which many today use as a guide in their walk with Christ. While studying in Paris, Ignatius met companions who would become the first members of the Society of Jesus, the Jesuit order. Bound together by a vow of poverty and chastity, their aim was “to help souls” wherever the church had need of them. Yet for a group of willing servants, they had a hard time winning approval from the church’s hierarchy. Ignatius’s spirituality attracted suspicion.

Ignatius believed in a simple but profound truth: God is present in all things. If we want to find God, we must look not only to the cloisters of a monastery and the four walls of a church but also to the canvas of our lives as they are lived out in the world. If we wish to find where God calls us, we should listen to our feelings of comfort and consolation, and move away from our experience of anxiety and desolation. This “way of proceeding,” found in Spiritual Exercises, has influenced how countless Christians perceive God’s presence in everyday life and has given many more a way of understanding where God is calling them.

But in sixteenth-century Europe, such a notion was considered radical, and Ignatius was brought before the Spanish Inquisition as early as 1526, and Spiritual Exercises was examined by the Roman Inquisition in 1548. Still, Ignatius insisted that the Society of Jesus be a group of contemplatives in action—present in the world around them where God is found, not confined to the walls of a monastery.

Collect for Ignatius of Loyola
Almighty God, who called Ignatius of Loyola to the service of your Divine Majesty and to seek you in all things; Give us also the grace to labor without counting the cost and to seek no reward other than knowing that we do your will; through Jesus Christ our Savior, who lives and reigns with you and the Holy Spirit, now and for ever. Amen. 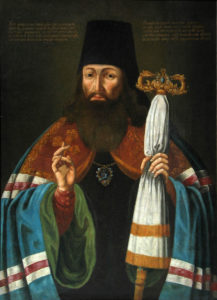 Timothy Savelyevich Sokolov (Tikhon’s given name) was born in 1724 in Novgorod, Russia, and grew up to be a famous bishop and monk known as the “Russian Chrysostom.”

His family was very poor: often, he would work an entire day to earn a single piece of bread. At age 13, he was sent to a clergy-run school, where he worked his way through as a vegetable gardener. Because of his intellect, he was awarded a state grant to attend seminary in Novgorod and stayed on at the seminary after graduation to teach. In 1758, he took vows as a monk and received the name Tikhon. At the same time, he was made prefect of the seminary.

People were drawn to his intellect, piety, and humility. In 1759, he was transferred to Tver and became the archimandrite of the Zheltikov monastery. Soon after, he was also made rector of Tver monastery, as well as the head of the nearby Torch monastery. And on Easter Sunday, 1761, he was accidentally selected as the bishop of Novgorod. The metropolitan (chief bishop) of the area had intended to move him to another monastery, but instead, the bishop of Tver cast lots upon his name three times in a row, and Tikhon was selected as the new bishop.

Tikhon took his new role very seriously. He wrote a series of books for his clergy so that they could perform their tasks with diligence. He required every clergy person to study the New Testament daily. Tikhon founded a school in 1765 and emphasized the importance of education for everyone.

In 1767, he retired because of overwork and exhaustion and went to the monastery in Zadonsk to recover. However, the notion of “rest” was a bit foreign to him; while at the monastery, he wrote a Rule of Life for the local clergy, as well as three more books on the nature and mystery of Christianity.

Throughout his life, he slept on straw, covered by a sheepskin. He was strict toward himself but kind to others. One Palm Sunday, he happened upon two fellow monks eating fish soup, and when he saw their distress, he said. “Sit down, for I know you. Love is higher than fasting.” He shared their soup to calm them.

Collect for Tikhon of Zadonsk
For love does not seek its own, it labors, sweats, watches to build up the brother: nothing is inconvenient to love, and by the help of God it turns the impossible into the possible…Love believes and hopes….It is ashamed of nothing (-Attributed to Tikhon)

169 Comments to "Ignatius of Loyola vs. Tikhon of Zadonsk"