Mellitus vs. Ephrem of Nisibis

In perhaps the first true resounding upset of Lent Madness 2019, Marina the Monk swept aside Dominic 62% to 38% to secure a spot in the Saintly Sixteen against Ignatius of Loyola.

In the last matchup of the first full week of the saintly season, it's Mellitus vs. Ephrem of Nisibis. Or Bishop vs. Deacon (not that we'd ever encourage the pitting of ecclesiastical orders against one another).

After a full, intense week of reading, learning, disagreeing, and hopefully being inspired, it's time for some respite from our little competition. From here on out, there will be no contests on Saturdays or Sundays. We occasionally share some weekend posts here on the website, and you can always check Facebook and Twitter for additional content, including some saintly recipes courtesy of the Lent Madness Celebrity Chef, Maria Virginia.

After today, the next vote will take place first thing Monday morning as the round of 32 continues with Tabitha vs. Dismas. In the meantime, get to it! 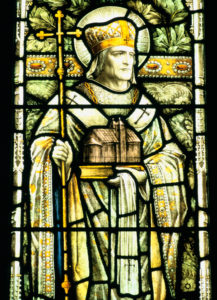 At the end of the sixth century, Augustine traveled to Britain to establish an official Christian presence in the region, although Christianity had been practiced in Britain for approximately 300 years. With the conversion and subsequent support of King Æthelberht in Kent, Augustine was consecrated Archbishop of Canterbury. Four years later, Augustine sent word to Pope Gregory I that he needed more clergy to join the mission of converting the kingdom.

Mellitus was part of this group traveling to Britain. A Roman and son of a noble family, Mellitus may have been an abbot at a monastery before he was commissioned for the trip. In 604 ce, Augustine consecrated him Bishop of London. Mellitus established the first of many churches that would be built on the site of the current St. Paul’s Cathedral. Mellitus and his fellow missionaries also brought with them books and other items needed for Christian worship. One of those books, St. Augustine’s Gospels, is still part of the Cambridge collections and is the oldest surviving Latin Gospel book.

After several years in England, Mellitus attended a council of bishops in 610 in Italy. The early church was in many ways still a loose confederacy of liturgies and practices. Mellitus supported the Roman date for Easter rather than the Celtic date (a controversy that would be decided at the Synod of Whitby some fifty years later).

When the kings who had welcomed Augustine and Mellitus died, their sons saw little political need for alliances with the Christian bishops. According to Bede, the sons wanted to taste the consecrated bread. When Mellitus refused, they exiled him to Gaul. Mellitus eventually returned to Canterbury after the death of Laurence, the second Archbishop of Canterbury, and was consecrated the third Archbishop of Canterbury.

Legend holds that a fire threatened Canterbury Cathedral, and Mellitus diverted the fire and saved the town and the cathedral with the rush of wind brought by his prayers. He died in 624. An icon honoring his ministry hangs near the American Chapel in St. Paul’s, keeping watch over a book inscribed with the names of Americans who died in World War II.

Collect for Mellitus
O God, you have brought us near to an innumerable company of angels, and to the spirits of just men made perfect: Grant us during our earthly pilgrimage to abide in their fellowship, and in our heavenly country to become partakers of their joy; through Jesus Christ our Lord, who lives and reigns with you and the Holy Spirit, one God, now and for ever. Amen. 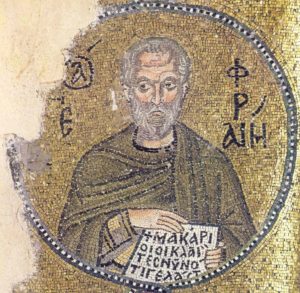 Ephrem, a deacon, doctor of the church, and saint greatly revered in the Syriac Christian tradition, was born around the year 300 ce in Nisibis, now part of modern-day Turkey. Most sources claim that Ephrem and his family were among the burgeoning Christian community in Nisibis, while some later traditions claim his father was a pagan priest. Regardless, Ephrem grew up in an incredibly diverse city linguistically, ethnically, and religiously—on the frontier of the Roman Empire.

Baptized as a youth, Ephrem was a part of a proto-monastic movement called “Sons and Daughters of the Covenant” (think Scouts + youth group, but way more intense). Members of the movement, both men and women, lived dedicated lives of celibacy, discipline, prayer, and service to the church from within their own homes. He would eventually be appointed a teacher and then ordained as a deacon by his bishop.

After Nisibis was conquered by the Persian Empire in the ongoing conflict between Persia and Rome, Ephrem and many of his fellow Christians settled in Edessa where they encountered even more religious and ethnical diversity. In the context of various pagan, Jewish, and Christian sects, Ephrem made an impassioned defense of Nicene orthodoxy, including writing a number of Trinitarian hymns. A prolific writer, he is known as “The Harp of the Holy Spirit,” and he supported the rise of hymns sung by choirs of women, including “From God Christ’s diety came forth” (The Hymnal 1982, #443). The female choirs gave women a role in the early Syriac church and encouraged Christian formation among women and families.

Lest we believe that Ephrem was all head and no heart in ministry, he died from exhaustion while ministering to the victims of a famine.

Collect for Ephrem of Nisibis
Pour out upon us, O Lord, that same Spirit by which your deacon Ephrem declared the mysteries of faith in sacred song, and so gladden our hearts that we, like him, might proclaim the riches of your glory; through Jesus Christ our Lord, who lives and reigns with you and the Holy Spirit, one God, now and for ever. Amen.

Mellitus vs. Ephrem of Nisibis

166 comments on “Mellitus vs. Ephrem of Nisibis”