Nicholas of Myra vs. Rudolph of Gubbio

After Monday's cardiac arrest-inducing battle between Pandita Ramabai and Damien of Molokai, it was a bit easier on our Lenten hearts to have a close-but-not-too-close contest to determine the Battle of Rome yesterday. Paula of Rome came out on top, defeating Marcella of Rome 57% to 43% to advance to the Saintly Sixteen, where she'll face Gobnait.

Today, in the 16th and final pairing of the Round of 32, it's the long-anticipated Santa vs. Rudolph Showdown, as Nicholas of Myra faces Rudolph of Gubbio. After this battle is complete, will Nicholas remain jolly with his belly shaking like a bowlful of jelly? Will Rudolph's nose remain bright or will he no longer be allowed to join in any reindeer games? These are the questions of the day as we continue to whittle down the field of saintly souls.

Tomorrow, the Saintly Sixteen begins as Martha of Bethany takes on Nicodemus. But that's a contest for another day. Let's go finish up this first round, shall we?

Telling the story of Nicholas presents a unique challenge because of the sheer volume of historical record, legend, facts, and rumors about his life and impact. It is probably impossible to fully untangle the facts from the legends—and perhaps we don’t want to.

The bare facts are these. Nicholas was born in 270 CE to a wealthy Greek Christian family in Asia Minor. Following the loss of his parents, he went on a pilgrimage to Egypt and Palestine and was likely briefly imprisoned during an outbreak of Christian persecution. On returning from this journey, Nicholas was made the bishop of Myra, and in this role, he likely attended the Council of Nicaea. Nicholas died in 343, and shortly after his death he begins to be venerated for his kindness, generosity, and compassion.

In one of the best-known legends, Nicholas encountered a man with three daughters whose poverty did not allow him to provide them a dowry. Without a dowry, the young women would likely be sold into slavery. And so Nicholas secretly gifted the gold for their dowries—and according to legend, threw the gold through the window whereon it landed on their socks or shoes.

Again and again, the stories of Nicholas’s life come back to this theme of generosity and gift-giving. Whether it is the resurrection of the three youths, sparing the lives of those falsely accused, or returning children to their parents, Nicholas is remembered as the protector of the innocent, especially of children.

Within just a few short generations after Nicholas’s death, churches began to be dedicated to the memory of this kind and generous bishop. As his veneration spread across Europe, the traditions of Saint Nicholas combined with other local traditions, giving us the historical roots for Santa Claus. The remembrance of Saint Nicholas the Wonderworker—patron of children, sailors, the falsely accused, and many others— continues to be observed on December 6.

Regardless of where one chooses to draw the line between the history and the legend of Saint Nicholas, his story has inspired generations of faithful women and men to acts of kindness, generosity, and compassion. Nicholas reminds us to speak up for those who cannot speak for themselves and to act on behalf of those who have no defender.

Collect for Nicholas of Myra
Almighty God, in your love you gave your servant Nicholas of Myra a perpetual name for deeds of kindness both on land and sea: Grant, we pray, that your church may never cease to work for the happiness of children, the safety of sailors, the relief of the poor, and the help of those tossed by tempests of doubt or grief; through Jesus Christ our Lord, who lives and reigns with you and the Holy Spirit, one God, for ever and ever. Amen. 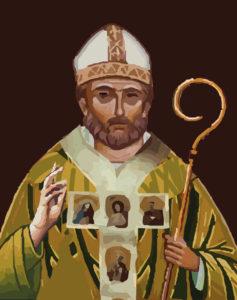 Rudolph of Gubbio was born in 1034 just outside of Gubbio, Italy. His father was a feudal lord. When he was about 17 years old, Rudolph encountered Saint Peter Damian and was converted to Christianity. He, along with his mother, now a widow, and brothers, decided to give their castle and possessions to the church. He became a disciple of Saint Peter Damian and joined the Benedictine Order.

While in the monastery, he studied philosophy and theology and excelled in Latin. He became a priest and practiced a rigorous asceticism. Rudolph wore a hair shirt and avoided meat, eggs, and cheese. He slept on a wooden board without blankets. Self-torture was routinely engaged. His body was so weakened by the ascetic practices that he developed a system of ropes to support him as he recited the psalms.

Rudolph’s piety was so well-known that although the church law said he was not yet old enough, Rudolph was made bishop of Gubbio at around age 25. Rudolph reluctantly accepted the charge, but his elevation to bishop did not change his piety. He continued to live humbly and austerely. He would only eat the food that was given to servants. He would often walk barefoot, using wooden clogs only in the winter. As bishop, he paid particular attention to those who were poor and vulnerable. His concern for those in need led one of his biographers to call him a “miracle of unselfishness.”

His long fasts and the severe treatment of his body ultimately took their toll. On October 17, 1066, still in his early 30s, Rudolph died. He was buried in the Cathedral of Gubbio. His body disappeared when the cathedral was renovated in 1670.

Collect for Rudolph of Gubbio
O God, whose blessed Son became poor that we through his poverty might be rich: Deliver us from an inordinate love of this world, that we, inspired by the devotion of your servant Rudolph of Gubbio, may serve you with singleness of heart, and attain to the riches of the age to come; through Jesus Christ our Lord, who lives and reigns with you, in the unity of the Holy Spirit, one God, now and for ever. Amen.

Nicholas of Myra vs. Rudolph of Gubbio

182 comments on “Nicholas of Myra vs. Rudolph of Gubbio”