Paula of Rome vs. Marcella of Rome

Yesterday, in one of the tightest matches in Lent Madness history, Pandita Ramabai snuck past Damien of Molokai despite a virtual dead heat. With over 8,500 votes cast, she won by a mere 45 votes. She'll square off against Marguerite d'Youville in the Saintly Sixteen. Close observers of this tight contest watched as Pandita staked out a slim early lead, watched as Damien came storming back as the Hawaiians woke up -- literally -- because of the time difference, and then Pandita's enthusiastic advocates tipped the scales. Whew!

Today, it's the Battle of Rome as contemporaries Paula of Rome and Marcella of Rome clash for the exclusive right to claim Rome as their own. Who will end up as queen of the Eternal City? You won't have to wait an eternity to find out, but a mere 24 hours.

And in case you missed yesterday's edition of Monday Madness, why not watch it right now? You'll be reminded of why Tim and Scott are serious when they claim each episode is never rehearsed and always done in a single take. Also, they share the stunning (and true) news that this week we have passed the 5 millionth page view in Lent Madness history. Not bad for a mom-and-pop online Lenten devotion. 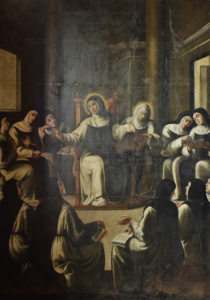 Paula of Rome was a wealthy woman purportedly descended from the line of Agamemnon, the Greek king during the Trojan War. When she was 16, she married a nobleman named Toxotius, and they had five children. In her youth, Paula lived extravagantly. She wore lavish silks procured from the finest markets in China. When she traveled around the city streets, a cluster of eunuch slaves carried her.

When Paula was in her thirties, Toxotius died. Then five years later, one of her daughters died. Paula’s grief was so great that she nearly died herself. Inspired by the faith and action of her contemporary Marcella, Paula opened her palace to the needy and set upon a life dedicated to God. She met Saint Jerome, who later described the “earnestness of her prayers, the brilliancy of her conversation, the tenacity of her memory, and the quickness of her intellect.” Paula and her daughter Eustochium joined Jerome on a pilgrimage from the bustling city of Rome to the Holy Land and Egypt. Paula settled in Bethlehem and built four monasteries, one for men and the other for women. She fasted, abstained, and lived a destitute life in order to focus on God, spending the rest of her years giving away her vast fortune to the poor.

Paula and Jerome continued working together. Jerome was commissioned to revise the Old Latin Gospels. Paula encouraged Jerome to expand the job and translate most of the books of the Bible into Latin. She provided him with resources for the translation, suggested revisions, and edited the manuscripts. The women of the convents served as scribes, making copies of this groundbreaking work, which became known as the Vulgate, the first translation of the Old Testament directly from Hebrew to Latin (rather than from Hebrew to Greek to Latin). In the sixteenth century, the Roman Catholic Church affirmed the Vulgate as its official Latin Bible, and it remained the standard until 1979.

Some have speculated about the extent of the relationship between Jerome and Paula. Yet Jerome’s words about his friend offer important insight to her life’s work. He wrote that Paula continued to practice a life of poverty and ascetic devotion in order “to preserve a singular attachment to God.”

Collect for Paula of Rome
Compel us, O God, to attend diligently to your Word, as your faithful servant Paula, that, by the inspiration of the Holy Spirit, we may find it profitable for doctrine, for reproof, for correction, and for instruction in righteousness; and that thereby we may be made wise unto salvation through faith in Christ Jesus. Amen. 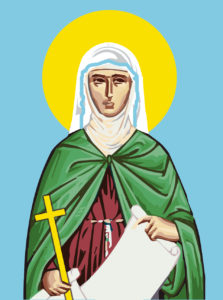 Marcella of Rome was born in 325 ce in Rome to wealthy parents. Her father died while she was still young. Her mother, Albina, continued to be an important influence, modeling kindness and care for those who were vulnerable. One of the more noteworthy guests to their home was Athanasius, bishop of Alexandria, during one of his many exiles. Upon his departure he gave Marcella a copy of his Life of Antony, a gift that would deeply inform Marcella’s life.

As a prominent noblewoman in Rome, Marcella married a wealthy aristocrat. He died just seven months after their marriage. Shortly thereafter, to the chagrin of her mother, Marcella rejected the marriage offer of an older Roman consul and took on the life of an ascetic. She wore simple clothes and abstained from meat. She regularly fasted and avoided excessive wine. She turned her estate into a place of refuge for those who were poor and vulnerable. As Saint Jerome so aptly wrote, Marcella chose “to store her money in the stomachs of the poor rather than to keep it at her disposal.” The community in her home came to be known as the Brown Dress Society, on account of their simple and unadorned attire.

Although education was not commmon for women in that time, Marcella also became a student of the scriptures, reading them in both Hebrew and Greek. Jerome, the famed translator of the Vulgate and one of our best sources on Marcella’s life, clearly thought the world of her and deeply respected her intellect. She is described as a keen mind who would, in spite of social pressures to be a silent woman, engage in rigorous theological debate.

In 410 when the Visigoths sacked Rome, they ravaged wealthy homes; those with money could pay for their survival. The Visigoths approached Marcella’s large estate and were incredulous when she informed them that she had no money. They beat her mercilessly. She was transferred to the Basilica of St. Paul and died there of her wounds.

Collect for Marcella of Rome
O God, who satisfies the longing soul and fills the hungry with good things: Grant that we, like your servant Marcella, may hunger and thirst after you more than the vain pomp and glory of the world and delight in your word more than all manner of riches. Through Jesus Christ our Lord, who lives and reigns with you and the Holy Spirit, one God, now and forever. Amen.

Paula of Rome vs. Marcella of Rome

Paula of Rome: By kenward [CC BY 2.0 (https://creativecommons.org/licenses/by/2.0)], via Wikimedia Commons
Marcella of Rome: Illustration by Alexis Fortuna Caoili

149 comments on “Paula of Rome vs. Marcella of Rome”