In yesterday’s Biblical action, Tabitha nailed Dismas 76% to 24% to advance to the Saintly Sixteen, where she’ll face the winner of Ananias vs. Photini.

In case you missed yesterday’s Creativity Episode of Monday Madness, you can watch it here. In it, Tim and Scott highlight some of the creative endeavors (show tunes! limericks!) being shared by the Lent Madness faithful in the comment section. You haven’t been reading the comments? Unlike literally everywhere else on the internet, it’s okay! We promise. 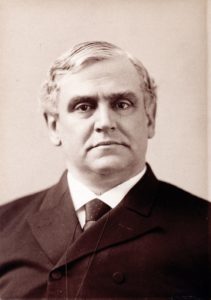 “I do not know what will become of me and I do not care much,” a young Phillips Brooks wrote, shortly after being fired from teaching at the Boston Latin School. “Somehow or other I do not seem in the way to come to much now.” When he died some thirty-eight years later, Phillips Brooks had built one of Boston’s landmark churches, authored a famed Christmas carol, taken his place as the preacher of record of his day, and brought countless numbers of people into deeper relationship with Jesus Christ. Indeed, he proved that in Jesus, nothing is lost.

After losing his job teaching, Brooks studied for ordination; he was ordained priest in 1860, and by 1869 he became rector of Trinity Church in Boston. By 1872, the church lay in ruins, a victim of Boston’s great fire. Brooks’ vision, character, and charismatic preaching led the church to thrive even in temporary structures. “The great hunger everywhere,” Brooks wrote, “is for life…all living things are craving an increase in it.” For Brooks, that life came from Jesus Christ, and Brooks’ sermons attracted crowds, Sunday after Sunday. Brooks’s leadership spurred the construction of the present-day Trinity Church, an innovative architectural marvel. In 1891, Brooks was elected as the Bishop of Massachusetts. In 1893, he died at age 57.

Years before, in 1865, while attending a six-hour Christmas Vigil service in Bethlehem’s Church of the Nativity, “a new carol was faintly formed in [Brooks’] mind.” Three years later while writing for the children of his Sunday School in Philadelphia, the carol “O Little Town of Bethlehem” was born. It remains, of course, a favorite of millions of Christians to this day.

When asked by a student near the end of his life to name the key to his success, Brooks wrote “these last years have had a peace and fullness which there did not used to be. I am sure that it is not indifference to anything I used to care for. I am sure that it is a deeper knowledge and truer love of Christ…I cannot tell you how personal this grows to me. He is here. He knows me, and I know him. It is no figure of speech. It is the realest thing in the world. And every day makes it realer.” 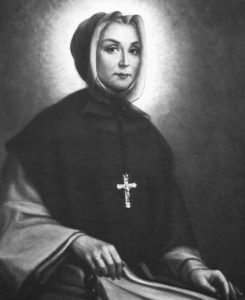 Marguerite was born in 1701 in Varennes, Quebec, the oldest of six children. When she was seven, her father’s death plunged the family into abject poverty. At 21, she married François d’Youville. While Marguerite was dedicated to her husband, he was dedicated to a life of illegal liquor trading and gambling. After eight years of marriage and six children (four of whom died in infancy), François died, again leaving Marguerite in poverty.

In the midst of her hardship, despair, and poverty, Marguerite found the wealth of God’s comfort. Her faith and belief in God’s love for all, especially those who were outcast and downtrodden, flourished, and she began devoting her life to small acts of care and comfort to those in need.

Her acts of love inspired other women, and during the Christmas season of 1737, Marguerite and three other women consecrated themselves to a life of serving God in the poor people Jesus so loved.

While we may see their acts of faith as loving and noble, Marguerite and the other women were derisively called, “Les soeurs grises” or “the tipsy nuns,” a reference to the many scandals of Marguerite’s late husband.

Their numbers grew. By 1744 the Order of Sisters of Charity of Montreal, also called the Grey Nuns, was a recognized religious order and their numbers increased, despite objection from the community and the church. As what some called an act of appeasement by the church, the Grey Nuns were given the decaying and indebted General Hospital of Montreal. The religious authorities of the day expected the women to fail at this ministry.

Instead, the Grey Nuns created a hospital that cared for all, including soldiers from both sides of the Seven Years’ War, orphans, the aged, and all in need regardless of ethnicity (which was quite scandalous at the time). The hospital became known as the Hôtel Dieu, the House of God.

The hospital was destroyed by fire in 1766. Upon seeing its destruction, Mother Marguerite and the Grey Nuns knelt in the ashes, sang the Te Deum, and began rebuilding. Marguerite died on December 23, 1771. Her legacy of the Grey Nuns remains. The sisters have served the poor and needy on almost every continent. She is called the “Mother of Universal Charity” and was the first native-born Canadian to be declared a saint.

Collect for Marguerite d’Youville
Almighty God, you have surrounded us with a great cloud of witnesses: Grant that we, encouraged by the good example of your servant Marguerite, may persevere in running the race that is set before us, until at last we may with her attain to your eternal joy; through Jesus Christ, the pioneer and perfecter of our faith, who lives and reigns with you and the Holy Spirit, one God, for ever and ever. Amen.