After a weekend in which people around the globe wore green, marched in parades, celebrated Irish heritage, and wondered how in the world St. Patrick could have lost to Constance in the first round of Lent Madness 2011, we're back for another full week of saintly thrills and spills! Believe it or not, we're halfway through the Round of 32 with eight contests decided and eight more to go.

To catch everyone up, on Friday, Ephrem of Nisibis routed Mellitus 70% to 30% to advance to the Saintly Sixteen, where he'll face John Chrysostom. Today, we're back to our Biblical saints as Tabitha squares off against Dismas on the plush purple carpet of the Lent Dome.

Stay tuned as later today Tim and Scott will release another epic episode of Monday Madness. For the uninitiated, the award-winning* Monday Madness is a production of the Supreme Executive Committee of Lent Madness, featuring high production values and even higher content value. These brief, split screen videos filmed live and (believe it or not) always in a single take, offer color commentary and inside information on issues related to Lent Madness. For the true aficionado of the Saintly Smackdown it is must-see-TV. 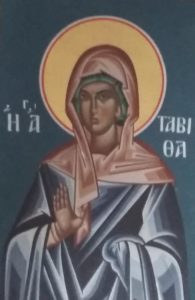 Actions speak louder than words. At least, they do in the story of Tabitha, also known as Dorcas, recorded in the book of Acts. Few words are spoken in the text, and Tabitha herself never speaks, but we learn about her from her own actions and the actions of others on her behalf.

We learn she was always doing good and helping the poor. We learn from the two men who run to Peter to urge him to come at once when Tabitha dies that she is known and loved by the community of believers in Joppa.

We learn from the widows who show up—crying and showing Peter the clothing and robes she has made for them—that her ministry provides for some of the most marginalized in society.

We learn from the words Peter speaks—“Tabitha, get up!”—how important he believes she and her ministry are both to the community and to the early church. We learn from her response, opening her eyes and sitting up when she sees Peter, how powerful the God she served is.

We learn from the fact Peter then presents Tabitha to the disciples—and especially, the text notes, to the widows—how central these women are to Tabitha and to the early church in a patriarchal society in which it was believed women “belonged” to a man and widows were left vulnerable.

Tabitha gives us an example of an ordinary believer in the early church and how the work of the people in the pews quietly providing for others’ needs—collecting school supplies and lining pantry shelves and volunteering for service projects—is just as important as the work of those out front, leading the church.

Today, Tabitha is celebrated in several Christian traditions, oftentimes alongside two other important women in the early church: Lydia, a successful businesswoman and early convert to The Way, and Phoebe, a leader in the church at Cenchreae who delivered Paul’s letter to the Romans. Their varied ministries show there is more than one way for women to follow Jesus.

Collect for Tabitha
Most Holy God, whose servant Tabitha you raised from the dead to display your power and confirm your message that your Son is Lord; grant unto us your grace, that aided by her prayers and example, we may be given a new life in your Spirit to do works pleasing in your sight; Through Jesus Christ your Son our Lord; who lives and reigns with you, in the unity of the Holy Spirit, one God, for ever and ever. Amen.

Dismas spent his life as a thief—eyeing something until greed overtook him, looking around to see if anyone could catch him, then maneuvering his body at just the right angle for the sleight of hand.

Why did Dismas do it? Did he need to steal in order to feed his family? Was he taking bread so that he might provide nourishment for eager and hungry mouths?

Or was Dismas consumed with jealousy? He could intuit the value of things and people. So, when Dismas saw the shine of coins or the sparkle of jewels, did he salivate with longing? Did he yearn to possess what belonged to his neighbor? Did he covet what he did not earn?

There are only a few things we know for sure about Dismas: He was a thief. He was caught stealing and sentenced to death. At the end of his life, people mocked Dismas as he hung on a tree. The slow torture happened publicly, as a warning to anyone who might consider stealing.

It’s hard to understand then why Dismas is included in our saintly line-up. What did he do to gain such recognition?

The Roman soldiers crucified Dismas next to two other men—another criminal and Jesus of Nazareth. The other offender mocked Jesus, jeering along with the soldiers and crowds, asking why Jesus wouldn’t save himself.

Dismas stood up to the bully, asking, “Do you not fear God?” Dismas pointed out that Jesus was innocent and didn’t deserve to die. Then Dismas pulled off the greatest heist of his life. While he was hanging on the cross, with the piercing pain of nails in flesh and the humiliating mob below him, as he gasped with collapsing lungs and felt the full weight of his crimes, Dismas asked Jesus for something that he didn’t earn or deserve. He said, “Jesus, remember me when you come into your kingdom.”

Jesus answered: “Truly I tell you, today you will be with me in Paradise.”

The two men died together. They suffered together, feeling their lashed skin stinging in the dry air. And yet, even among that harsh brutality, Dismas had the hope of paradise.

Collect for Dismas
God of grace, we thank you for your forgiveness, even when we deserve punishment. We thank you for the gift of those who suffer with us and for the continued hope that we might someday share joy with them. Through Jesus, we pray. Amen.