Congratulations! You survived the very first day of Lent Madness 2019. Which is more than we can say for Mary of Bethany, who was bounced by her sister Martha 58% to 42%. Martha becomes our first saint to qualify for the Saintly Sixteen, where she'll face the winner of James the Greater vs. Nicodemus.

You should also congratulate yourself for having participated in a record setting day in the annals of Lent Madness history. Yesterday's sibling matchup received nearly 10,500 votes, with over 500 comments, and more page views than we've ever had on a single day (almost 39,000, for those keeping score at home). And, despite a few shaky moments, you didn't crash the server!

Don't forget that tomorrow is the ONLY SATURDAY MATCHUP of Lent Madness 2019. After Ignatius of Loyola faces Tikhon of Zadonsk, voting will strictly take place on the weekdays of Lent, giving everyone a needed breather from the intensity of everyone's favorite online Lenten devotion. 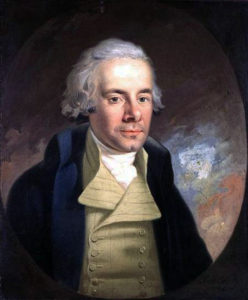 William Wilberforce was an English politician who underwent a dramatic conversion experience and spent his life trying to abolish the slave trade in the British Empire.

Born in Yorkshire in 1759, he lived with his aunt and uncle for a number of years, who influenced him with their love of Methodism. However, during his years at St. John’s College in Cambridge, their religious influence waned, and he was known as a man about town, fond of “theater-going, attending balls, and playing cards.” The horror.

He decided to run for Parliament when still a student, based on the solid premise that his friend was also doing it and it seemed like fun. Wilberforce turned out to be good at politics, being persuasive and gifted with a great speaking voice, but his persistent disorganization and proclivity for lateness meant he wasn’t much of a powerhouse.

In 1785, Wilberforce had a conversion experience, and after a period of discernment, he decided to use his public position to spread Christian ideals and ethics. He began meeting with several other high-profile politicians in England who were concerned about the moral depravity of the slave trade. At the time, the so-called Triangle Trade contributed about 80 percent of British income that derived from trade. The group, which included William Pitt, Thomas Clarkson, and others, became known as the Society for Effecting the Abolition of the Slave Trade.

The group launched an intense and long-lasting campaign, with logo, pamphlets, and chapters that sprang up across the United Kingdom—effectively the first grassroots human rights campaign in history. Wilberforce’s group networked with abolitionists in France, Spain, Portugal, and the United States and brought together Quakers and Anglicans on the same cause for the first time.

Finally, after a long and difficult fight, Wilberforce and his society succeeded in banning the slave trade in the United Kingdom in 1807. Wilberforce continued lobbying and working for a total abolition of slavery. He received word that a total abolition law would be enacted three days before his death in 1833.

Collect for William Wilberforce
O Lord, reassure me with your quickening Spirit; without you I can do nothing. Mortify in me all ambition, vanity, vainglory, worldliness, pride, selfishness, and resistance from God, and fill me with love, peace and all the fruits of the Spirit. O Lord, I know not what I am, but to you I flee for refuge. I would surrender myself to you, trusting your precious promises and against hope believing in hope. Amen.
(-Attributed to Wilberforce) 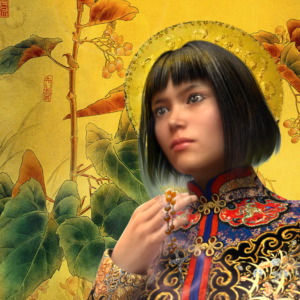 Agatha Lin Zhao devoted her life to educating others about traditional Chinese culture, the world, and her faith. Ultimately, that commitment to education cost her life.

Early on, two conflicting commitments were made in Agatha’s life. Her parents had committed Agatha to be married to a young man whom they thought would help secure their family’s future. Meanwhile, Agatha had committed herself to serving God and the church.

Agatha’s parents were no strangers to the sacrifices of faith. Themselves Christians, Agatha’s father was in prison for refusing to renounce his faith when his daughter was born in 1817. When they found out about her commitment to God, her parents released Agatha from the betrothal. In the following years, Agatha pursued her education under her religious tutors, coming home at intervals to care for her parents.

At twenty-five, Agatha Lin Zhao took religious vows and was sent out as a missionary and educator. She proceeded to the frontier of Southern China, weaving together traditional Chinese culture and Christian faith as she taught in the local villages of the Hmong, Hmub, and Xong people (collectively known as the Miao by the Chinese).

Agatha did not see the Chinese culture of her childhood in conflict with her faith, but the Chinese authorities disagreed. Refusing to renounce her Christian faith, she was arrested and beheaded on January 28, 1858.

The work and sacrifice of Agatha Lin Zhoa was recognized as a martyr saint of China canonized by Pope John Paul II in 2000. She is remembered on February 19 alongside Anges Tsao Kou Ying and Lucy Yi Zhenmei.

Collect for Agatha Lin Zhao
Lord Jesus Christ, who willingly walked the way of the cross: Strengthen your church through the witness of your servant Agatha Lin Zhao to hold fast to the path of discipleship even unto death; for with the Father and Holy Spirit you live and reign, one God, for ever and ever. Amen.