A week that saw us transition from the Round of 32 to the Saintly Sixteen, winds up with a matchup between a man who dedicated his life to the abolition of the slave trade and a man who was born into slavery. William Wilberforce and Richard Allen square off for a spot in the Elate Eight. Fair? Just? Of course not! Ridiculous? Absurd? Of course! It's Lent Madness.

Yesterday Martha of Bethany became the first saint to make it the Elate Eight as she left Nicodemus in the dark 74% to 26%.

We were also delighted to note that the three creative geniuses of Lent Madness 2019 did not relegate their talents to the first round. Sr. Diana Doncaster, Michael Wachter, and John Cabot have continued their hymn writing, show tunes, and limericks into the Saintly Sixteen. For however long the penitential creative juices keep flowing, legions of fans remain grateful for your efforts. Bravo!

We do hope your Lent Madness Withdrawal (LMW) symptoms are not too severe this weekend. If you begin to feel out-of sorts or find yourself staring at your computer screen refreshing your browser over and over again pining for Monday morning, we suggest binge watching old episodes of Monday Madness. Or attending church on Sunday dressed up as your favorite Celebrity Blogger.

But fear not. We'll see you soon enough as things get cranked back up again first thing on Monday as Ignatius of Loyola faces Marina the Monk. 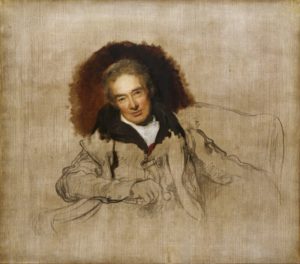 William Wilberforce (1759-1833) dedicated his entire life to ending the trade of enslaved people in the British Empire.

Wilberforce was an evangelical Anglican. He was born again not once, but twice: once when he was a young man living with his aunt and uncle, then again when he was an adult, touring Europe with his friends, upon reading “The Rise and Progress of Religion in the Soul” by Philip Dodderidge.  This second conversion experience made him deeply self-critical. He saw Christianity as a call to morality placed equally on everyone. (The strong social justice bent of the Methodist movement at the time was a heavy influence on him.)

This led him to champion ethical reforms, including allowing the dissection after execution of criminals—both to prevent the thriving blackmarket trade in corpses stolen from graveyards, and to allow greater learning by doctors and scientists about the miracle of the human body. He was in favor of Hannah More’s Sunday schools (originally intended to educate the lower classes, who couldn’t otherwise afford an education), better working conditions for chimney sweeps and textile workers, and prison reform.

Notably, he helped found the Society for the Prevention of Cruelty to Animals, to the great joy of millions of cats and dogs everywhere. (He also founded what became the Royal National Lifeboat Institution, but that does not have quite the Cuteness Quotient.)

He wrote, in 1787, “God Almighty has set before me two great objects: the suppression of the slave trade, and the Reformation of Manners [moral values].” And indeed, Wilberforce’s accomplishment in abolishing the trade of enslaved people cannot be overstated. When he wrote the above, profits made from the “Triangle Trade” made up 80% of all British income from trade. (If you cannot recall your history, the “Triangle Trade” is the deceptively innocuous phrase that refers to the pattern of shipping enslaved people from the African continent to the Caribbean in exchange for sugar and rum, then sugar and rum across to England, then the sugar and rum would be sold in England in exchange for British-manufactured goods, which would be sold down to African slave traders.)

This campaign was both lengthy, and all-consuming. Wilberforce actually was so overworked that he made himself ill, and couldn’t even be in Parliament to propose the first law himself. It was also the first grassroots, worldwide human rights campaign. The Society for Effecting the Abolition of the Slave Trade, founded in 1787 by Thomas Clarkson and Wilberforce, among others, brought together not only Anglicans and Quakers for the first time, but also abolitionists in France, Spain, Portugal, and the US. Chapters sprang up across the world, and members wrote pamphlets and letters to each other. The Society urged everyone to write their MP and sign petitions. Josiah Wedgewood even made a special logo for his china so everyone could show their support. It set the model for the modern political organizing we know. “If to be feelingly alive to the sufferings of my fellow-creatures is to be a fanatic, I am one of the most incurable fanatics ever permitted to be at large,” he said.

Wilberforce died three days after being told that total abolition of slavery in the British Empire was accomplished. He literally gave his life to right a great injustice. 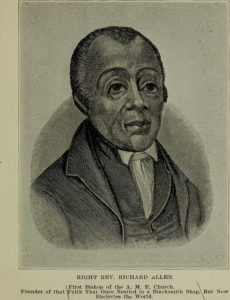 It has been well publicized that Richard Allen is the founding bishop of the African Methodist Episcopal Church, work he began after he and Absalom Jones walked out of Saint George’s Methodist Episcopal Church in protest of its racist policies. However, his work extends beyond the founding of the first independent Black denomination in America. In a 2016 Religion News Service article, Adelle M. Banks suggests that Allen was deeply involved in the conversion of his slave master to whom he gave a gift after his manumission for his “uncommon kind treatment.” Even so, Allen described American Chattel Slavery as “a bitter pill, notwithstanding we had a good master.”

Richard Allen’s pioneering tendencies have led many historians to write about him, touting his feminism (before it was even a word that was coined) demonstrated in licensing women to preach and his leadership in the advancement of black institutions. Dr. Robert Franklin, President-Emeritus of Morehouse College suggests that “The birth of strong black institutions is a part of his legacy.”

Prior to his founding of the AME Church or any other prominent ministry, Allen was a Methodist minister on the circuit, preaching to white and black congregations throughout much of the East Coast, including South Carolina and Maryland. He writes that he was so dedicated to the ministry of a circuit-riding Methodist that at times his "feet became so sore and painful that I could scarcely be able to put them to the floor."

Prior to the walkout, Jones and Allen had begun developing plans to build a church for black Philadelphians to worship in. The idea was brought up to a white elder who attempted to discourage the work. Allen writes that he “used very degrading and insulting language to us, to try and prevent us from going on. We all belonged to St. George's church.... We felt ourselves much cramped; but my dear Lord was with us, and we believed, if it was his will, the work would go on, and that we would be able to succeed in building the house of the Lord.”