We love hearing stories about the ways Lent Madness makes a difference, and we have quite a story to share today. As you might have seen from coverage in Episcopal News Service, the Anglican Communion News Service, the Episcopal Cafe, or the Living Church, there's a new church in California. Two Episcopal congregations merged, and they wanted to begin their new life together under a new name.

Inspired by 2018 Golden Halo winner Anna Alexander, they have chosen to call themselves St. Anna's Episcopal Church. Here's the release their rector, the Rev. Jill Honodel, sent us. We at Lent Madness HQ pray that this new community has a flourishing ministry in which lives are transformed through the grace of Jesus Christ.

Antioch, California – Sunday, in a much-anticipated liturgy, the words of the Rt. Rev. Marc Andrus, Bishop of the Diocese of California, soared through the air, “It is my delight to authorize with the consent of the Standing Committee the organization of St. George’s and St. Alban’s into a new bishop’s congregation with the name of St. Anna’s Episcopal Church.” 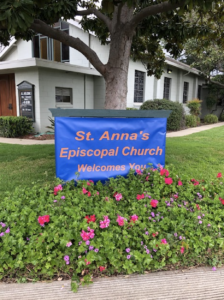 With those words read by Canon to the Ordinary Abbott Bailey, the first Episcopal Church in the nation to be named after St. Anna Alexander was created. A community celebration is planned for July 21.

Anna Ellison Butler Alexander is a new saint in the Episcopal tradition whose Feast Day is on September 24th and will be included in the next edition of Lesser Feasts and Fasts. She came to the attention of St. George’s, Antioch, and St. Alban’s, Brentwood, during last year’s Lent Madness, Forward Movement’s version of March Madness with saints “competing” in the brackets. St. Anna “won” the Golden Halo, six months before General Convention reaffirmed her sainthood in July. Born shortly after the Emancipation Proclamation in 1863, Anna Alexander devoted her life to the service of others by providing much needed education and literacy to the children of those formerly enslaved. Despite the segregation of the Episcopal Church at the time, she became the first African American Deaconess in the Episcopal Church.

The new congregation has parishioners who hail directly from Uganda, Liberia, Nigeria, Sri Lanka, The Philippines, Korea, Mexico, Canada, Holland, Lebanon, Sierra Leone, Bermuda and Ghana among others. The Rev. Jill Honodel, Long-Term Supply Priest said, “We were so inspired by Anna's story of the pouring out her life for the sake of those formerly enslaved; despite having little resources she managed over time to build a school as well as a church to help people succeed through literacy. Educational segregation exists right here in our neighborhood in that only 9% of the African American boys pass their math through high school. We are inspired by St. Anna to do our part so that as many people as possible have a chance to succeed and the opportunity for a good future.” When parishioner Betty Smith saw the saint’s photo on the front cover of Sunday’s bulletin, she said, “It was good to come to church this morning and to see a saint of the church that looks like me. I’m really thankful that God has given this to me in my time.”

St. George’s of Antioch and St. Alban’s of Brentwood, which are near the epicenter of the real estate crash that impacted the nation in 2008, were hard hit. In 2018, they decided to not only share space in Antioch but also to share governance. On September 30th, the two mission churches officially petitioned to merge and reform into a new mission. The membership was unanimous in the decision. There is potential for a future church plant in Brentwood on a 9-acre property owned by the Diocese of California. The membership of the new St. Anna’s has done significant and heartfelt congregational work over the last two and a half years. Bishop Marc Andrus has been supportive of the congregations and their merging into one and naming themselves after the church’s newest saint. 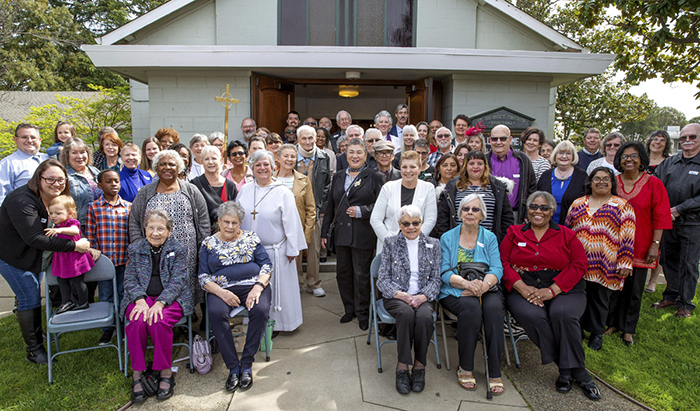 The new Senior Warden of St. Anna’s, Michelle Price, summarizes the sentiments of the congregation by saying, “I’m elated that we are finally St. Anna’s Episcopal Church. I was so inspired by her story in Lent Madness. She models what I feel is true Christianity: her quiet faithfulness and being a teacher, a champion for literacy and education, which is something I feel very passionately about. I took away from Lent Madness her being a saint as something I could emulate in my own life. Some of the saints do things that are so huge and so dynamic and here’s this humble, small woman in Pennick, that just quietly changed people’s lives one student at a time and depopulated the area and brought them to a new life where otherwise they would have been left behind so she is truly an inspiration to me. Hopefully our church will model the same through our resource center by hosting literacy programs, after school programs and math programs.”

Mimi Costa-White whose photo as a five-year-old was taken in the church when it was called St. Barnabas said, “Witnessing the proclamation of the birth of St. Anna’s Episcopal was both moving and joyous. I felt St. Anna Alexander’s spirit of strength, determination and love of community in every moment of the service. It makes me very proud to be a member of the first church to honor her memory and teachings.”

The mission statement of St. Anna’s is A diverse community celebrating God’s love and acceptance.