John Chrysostom vs. Ephrem of Nisibis

In yesterday's saintly action, Ignatius of Loyola closed the door on Marina the Monk 60% to 40%, paving the way to the Elate Eight. He'll face the winner of Gobnait vs. Paula of Rome in the next round.

Today John Chrysostom squares off against Ephrem of Nisibis, as bishop meets deacon for a shot at the Elate Eight. Will the Golden Mouthed prevail over the Harp of the Holy Spirit? Well, that's up to you.

In case you missed yesterday's exciting episode of Monday Madness, you can watch it here. Tim and Scott dove headlong into the giant sack of viewer mail, plugged books, and reminded everyone on April Fools' Day, what it means to live as a Fool for Christ -- not by anything they actually said, mind you. Oh, and if you actually did neglect to watch Monday Madness, you should head on over to the virtual purple confessional. 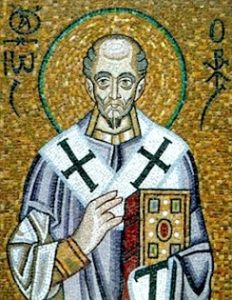 John Chrysostom, the “golden mouthed,” is remembered for his stirring oratory.

His sermons in many ways speak to a context similar to where we find ourselves today. Antioch was a prosperous city with a fantastic agora that gave people access to just about anything that one could desire. Those who were wealthy made ostentatious displays of their largesse. Philanthropy was a means to improve their social standing. John spoke boldly into that context encouraging his congregants to give particular attention to those who were poor and vulnerable.

He encouraged his listeners to be generous, often extolling the virtues of giving alms. At one point he was so bold as to say, “Almsgiving is an art and better than all arts.” Moreover, he would assert that our giving should have no boundaries: “When it comes to doing good, let every human be your neighbor.” Giving was not to be occasional but a habit, akin to the washing of one’s hands. He so frequently returned to the topic that at one point he pleaded with his audience, “Don’t consider my continual mention of this topic a cause for censure!”

In his sermons there is also a real sense of the gritty realities of economics. In one sermon he notes how “Countless poor people have to go hungry so that you can wear a single ruby.” In another sermon Chrysostom allows for the fact that sometimes wealth is ill-achieved. Such should not, he argues, preclude generosity: “Have you gained ill? Spend well. Have you gathered riches by unrighteousness? Scatter them abroad in righteousness.”

His sermons stress mutuality. In one sermon he boldly asserts, “The poor are the doctors of our soul, our benefactors and patrons.” In another he makes clear that those who are poor are not to be looked down upon but seen as Christ: “Let this then be your thought with regard to Christ also, when he is going about a wanderer, and a stranger, needing a roof to cover him; and you, neglecting to receive him, decorate a pavement, and walls and capitals of columns, and hang up lamps by means of silver chains, but himself bound in prison you will not even look upon?”

His concern for those who were poor and vulnerable was not limited to his sermonizing. When he was elevated to the Patriarch of Constantinople he cut the Bishop’s household budget and used the funds to support one of the hospitals. He also commissioned a leper colony to be constructed just outside the city. Nearly immediately after his exile, construction on the colony ceased. 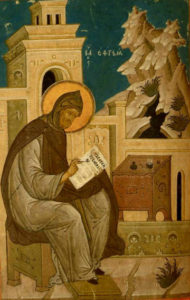 Ephrem of Nisibis was known as “the Harp of the Spirit,” likely referring to the way he wrote religious poetry that conveyed the power and truth of the Christian message. This knack for writing and poetry can be seen in his Hymns against Heresies. In a time when the early Church was wrestling with what were the fundamentals of Christian truth (amid a swirling context of competing, often contradictory claims), the early councils of the Church were instrumental in discerning the foundational claims of the nascent Christian faith.

When Ephrem of Nisibis wrote Hymns against Heresies, he was kicking butt and taking names - quite literally. In the opening verses to hymn 22, Ephrem names Marcion, Valentinus, The Quqite, Bardaisan, and Mani among those who had erred from the path, describing them as “a bundle of thorns and thistles.” Lest we think that Ephrem’s tell-all hymn was about petty personal rivalry or the early 4th century version of our modern day “call out culture,” the following verses go into detail about the ways that the teachings of these heretics harm the faithful who comprise the church. His basic complaint that he repeats in verse after verse is the way the aforementioned heretics stole people away from the flock of Jesus Christ (and one another) in order to create their own communities. In one particularly stunning verse, Ephrem writes:

See, my brothers, how [with] the image of the king

Every coin is struck,
But a great general is unable
To stamp a penny with his image.
When [someone] stamps the image of the king,
One who stamps it in secret,
He is either burned or cut off.
How indeed he has dared, the one who
Stamped the image of himself instead of [that of] our Lord!
Response: Blessed is the one who stamps us with his name!

For Ephrem, the Church and its members were stamped with the image of Christ and any competing claim was an attempt to decenter the divine in order to center the human. It was nothing less than idolatry. He goes further in the next verse to suggest,

Our savior stamps his beauty.
Who[ever] has believed in the name of God
Receives the stamp of God,
But if he has called himself by the name of a human being,
Then he receives a human stamp,
Because he despises the living name.

John Chrysostom vs. Ephrem of Nisibis

101 comments on “John Chrysostom vs. Ephrem of Nisibis”