Zenaida vs. Nicholas of Myra

Congratulations! You survived another weekend devoid of voting. We realize this can cause Itchy Mouse Finger Syndrome (IMFS) for which we recommend sleeping all weekend. But, sleepers wake! For it is time to begin the last FULL week of Lent Madness 2019.

As a reminder, on Friday, Gobnait washed away Paula of Rome 73% to 27% to reach the Elate Eight, where she'll face Ignatius of Loyola.

Today, in the final matchup of the Saintly Sixteen, Zenaida faces Nicholas of Myra with the last remaining spot in the Elate Eight on the line. After today we bid farewell to Quotes & Quirks and set our minds upon the Saintly Kitsch of the Elate Eight. Stay tuned later today for another exciting episode of Monday Madness as Tim and Scott break it all down. 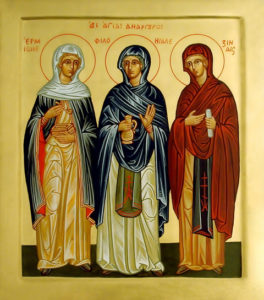 Move over Mother of Dragons, it’s time to meet the Mother of Modern Medicine. In the time of Jesus, when winter was coming, the woman who faced off against what was known as “mercenary medicine” or healthcare for only those who could afford it, was Zenaida of Tarsus. She, along with her sisters Phionella and Hermione (hello ancient Harry Potter reference), were the first women to enter formally into the profession of medicine and establish what is known as “unmercenary” medicine. Unmercenary medicine was care that focused on the holistic integration of clinical practice with prayer, mental hygiene, and spiritual wellness and was offered to not only those who could afford it, but also to those who could not.

Even in earliest times, the idea of “universal healthcare” was seen as a need. Today, that tradition continues through the Spiritual Works of Ministry in which we heal the sick and care for the poor as a part of our Christian practice. On the healthcare side of the house, integrated medicine is making a comeback as more and more people see a connection between their physical ailments and other mental and spiritual ills.

Zenaida and her sisters were drawn to medicine after studying philosophy at the school of Tarsus. Following her baptism, the marriage of philosophy, Christian practice, and medicine appealed to her. The idea that salvation and redemption were a part of the healing process struck a chord for Zenaida and she saw how Christ is fundamental to the healing of the whole person: mind, body and spirit.

As a result, Zenaida is often attributed to be one of the first practitioners of psychiatry (along with gynecology and pediatrics—she really was a forerunner of the modern family physician) recognizing that mental illnesses often have specific causes and cures and are intricately interwoven with the health of the body and spirit.

Another name for Zenaida and her sisters is the “friends of peace.” They built their hospitals in areas of extreme poverty rather than in city centers where wealth was concentrated. Her sister Hermione is attributed with establishing “xenodochia” of “hostel hospitals” which became a ministry of the early Orthodox church. It is not surprising to learn that Christianity was spread concurrently with spreading health and healing across the lands. Indeed, can one really be healthy or whole without Christ? 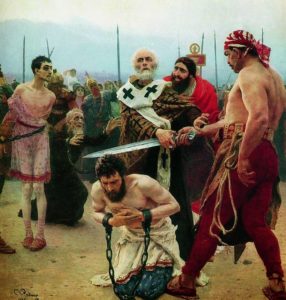 The impact of and admiration for Nicholas of Myra cannot be overstated. He provides an example and a hope that reaches across denominational, historical, ethic, and religious lines.

Once again St. Nicholas Day
Has even come to our hideaway;
It won't be quite as fun, I fear,
As the happy day we had last year.
Then we were hopeful, no reason to doubt
That optimism would win the bout,
And by the time this year came round,
We'd all be free, and safe and sound.
Still, let's not forget it's St. Nicholas Day,
Though we've nothing left to give away.
We'll have to find something else to do:
So everyone please look in their shoe!

How has Nicholas remained so important for so many? How was it his story that inspired countless other stories about generosity and kindness?

It could be that Nicholas was known to stand up for the innocent and the wrongly accused – as when he intervened at the moment of execution for three innocent young men.

Or it could be that Nicholas is remembered for acts of great generosity – whether it was the story of providing the dowry for three girls, or providing food for two years in the middle of a famine.

But most of all, perhaps it is Nicholas’s care and love for children – those most vulnerable and innocent in every society – that has endeared him to history. There was the story beloved in the medieval church of Nicholas resurrecting three boys who had been murdered and then placed into pickling barrels. Or the infant that he rescued from being burned in an overheated bathtub. And on and on, countless stories told of Nicholas caring for, providing for, and protecting children.

The example of Nicholas – generous, kind, protector of children and the innocent – can be as daunting as it is inspirational. While no writings of Nicholas have survived, one of the few quotes attributed to him give us a hint of how Nicholas lived such an amazing life, and how we can follow in the same direction:

“The giver of every good and perfect gift has called upon us to mimic His giving, by grace, through faith, and this is not of ourselves.”

Zenaida vs. Nicholas of Myra

108 comments on “Zenaida vs. Nicholas of Myra”