After the heady days of Nominationtide, and the submission of hundreds and hundreds of saintly nominations, the Supreme Executive Committee is pleased to release the highly anticipated 2020 Lent Madness bracket. Following their Spring Retreat, held in a secure, undisclosed coffee shop where Herculean amounts of single origin coffee was consumed, the SEC whittled down the field to 32 saints who will compete for the coveted Golden Halo.

This year, All Brackets' Day just happens to fall, appropriately enough, on All Saints' Sunday. Which means that people everywhere will have something to talk about at coffee hour, besides critiquing the preacher's sermon. Let the bracketological conversations, feuds, and smack-talk ensue!

But enough of this preamble. Let's get to the 2020 bracket!

This year’s saints include heavyweights such as Patrick, Harriet Tubman, Clare of Assisi, Hildegaard of Bingen, Joseph, and Jude, along with many lesser known yet equally inspiring people of faith. Here's the bracket (click for a bigger version). 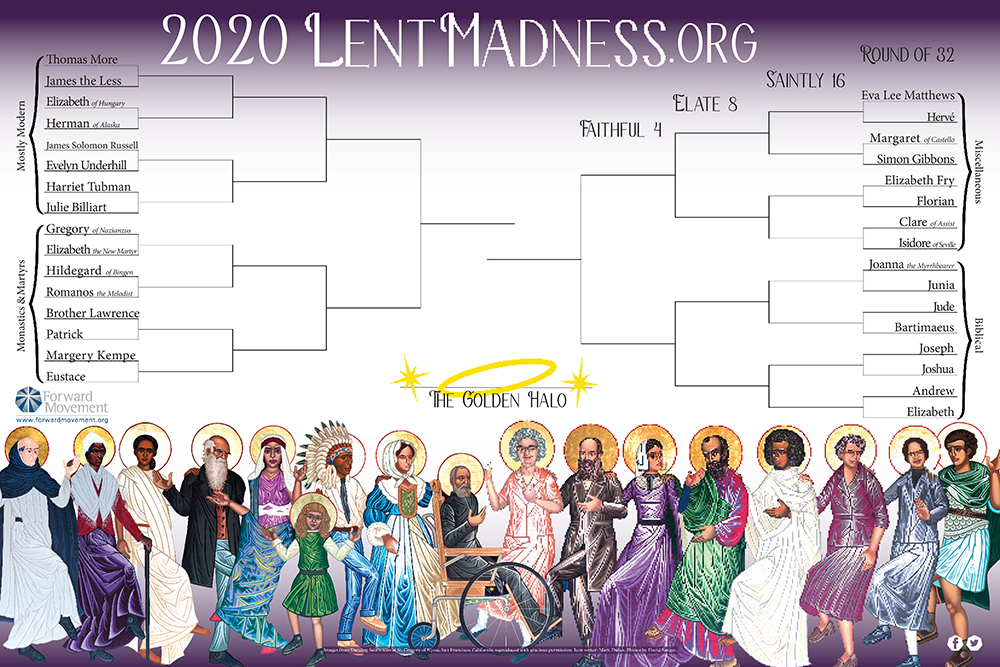 As a reminder, or if your new to this wacky online devotion, here’s how Lent Madness works: on the weekdays of Lent, information is posted at www.lentmadness.org about two different saints. Each pairing remains open for 24 hours as participants read about and then vote to determine which saint moves on to the next round. Sixteen saints make it to the Round of the Saintly Sixteen; eight advance to the Round of the Elate Eight; four make it to the Faithful Four; two to the Championship; and the winner is awarded the Golden Halo.

Unlike professional and collegiate sporting events, there is no admission cost for Lent Madness, but souvenirs and study aids are available in the Lentorium. The Saintly Scorecard: The Official Guide to Lent Madness 2020 is now available as are Bracket posters. Although Lent Madness doesn't officially kick off until Ash Thursday, February 27, you're encouraged to order your Lent Madness materials now while supplies last (seriously, we tend to run out of these things in the run-up to Lent). Plus they make AMAZING stocking stuffers. With just 114 shopping days until Ash Thursday, it's not too soon to start loading up!

Twelve “celebrity bloggers” from across the country have been tapped to write for the project: the Rev. Amber Belldene of San Francisco, CA; the Rev. Laurie Brock of Lexington, KY; Anna Fitch Courie of Columbia, SC; Dr. David Creech of Moorhead, MN; the Rev. Megan Castellan of Ithaca, NY; Miguel Escobar of Brooklyn, NY; Neva Rae Fox of Somerville, NJ; the Rev. David Hansen of Woodlands, TX; Carol Howard Merrit of Chattanooga, TN; Emily McFarlan Miller of Chicago, IL; Dr. Sandra Montes of New York, NY; and the Rev. David Sibley of Walla Walla, WA. Information about each of the celebrity bloggers and the rest of the team is available on the Lent Madness website.

As you revel in the joys of All Brackets' Day, join Tim and Scott for a special Facebook Live Bracket Release Party at 8:00 pm EST on the Lent Madness Facebook page. Happy Lent!