Thomas More vs. James the Less

Welcome to the opening matchup of Lent Madness 2020! If you're a veteran of the Saintly Smackdown, we're delighted you're back for another 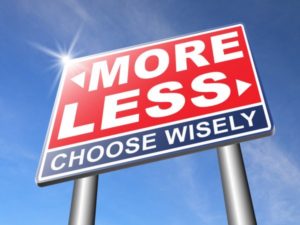 year of saintly thrills and spills. If you're joining us for the first time, we're especially glad you're along for this wild penitential ride. If you're curious about what this all entails, check out the About Lent Madness tab on the website.

To experience the fullness of the Lent Madness experience, the Supreme Executive Committee (the somewhat benevolent dictatorship that runs this whole enterprise) encourages you to do several things. First, like Lent Madness on Facebook and/or follow us on Twitter. Second, subscribe to the Lent Madness e-mails so you never miss a vote -- you'll get each matchup hand-delivered to your inbox on the weekdays of Lent. You can do this by going to the home page of our website and entering your e-mail address (near the top right). Third, you can support the ministry of Lent Madness by heading over to the Lentorium and purchasing Lent Madness swag, thereby impressing everyone on your block. Or at least in your pew.

But mostly, we encourage you to read about the 32 saints participating in this year’s edition of Lent Madness, faithfully cast your (single!) vote on the weekdays of Lent, and add your comments to the great cloud of participating witnesses that gathers as the online Lent Madness community each year. If you're wondering when your favorite saint will be competing - in order to rally your friends and neighbors (creative campaigning is encouraged, voter fraud is not) - you can check out the 2020 Matchup Calendar.

Things kick off with an early 16th century Anglican facing off against a Biblical character as Thomas More clashes with James the Less. We hope you enjoy reading about these two saintly souls, more or less, before casting your very first vote of Lent Madness 2020! We're glad you're all here. Now get to it! 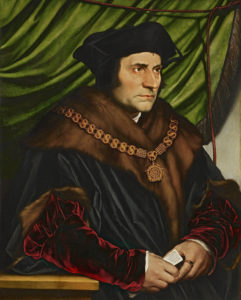 Of all the characters of the English Reformation, few are as remarkable as Sir Thomas More. He was considered a scold yet also a man of quick wit, at once both politically astute and obstinate, and a man who was behind his time even as he lived ahead of it.

Born in 1478, Thomas became a barrister in 1502 and was elected to Parliament in 1504. For a time, Thomas debated becoming a Franciscan or a priest — and ultimately chose neither, pursuing marriage and a legal career instead. While known for his strict piety, including the wearing of a hair shirt, and the daily recitation of the Offices, Thomas delighted in life in London and was eager to engage in argument and debate.

Thomas’s intellect, honesty, and loyalty to his family and king brought him into the service of Henry VIII. During this time, Thomas wrote Utopia, a political essay envisioning an ideal community in which there is no private property, universal religious toleration, and free education for men and women alike.

Thomas was a devoted husband and father, committed to the education of his wife and four daughters to a level far exceeding the standard education of women during that time; his dedication to this task was often noted by his contemporaries.

In 1529, Thomas became Lord Chancellor of England. Thomas was strident in his opposition to the Protestant Reformation, and his support in joining Henry VIII’s attack on Martin Luther earned him the title “defender of the faith” by the Pope. As Henry moved to assert his power as king over the Church in England, Thomas, dedicated to the Roman Church, found himself in opposition to the king he loved. He resigned as chancellor in 1532. When Thomas later refused to take an oath swearing that Henry’s marriage to Anne Boleyn was true and valid (after the divorce from Catharine of Aragon), he was thrown into the Tower of London. At trial, Thomas defended himself as being true to the church over any king. He was condemned to die and executed in 1535. His final words were that he died for the faith of the Church and was “the king’s good servant, but God’s first.”

Collect for Thomas More
Almighty God, by whose grace and power your holy martyr Thomas More triumphed over suffering and was faithful even to death: Grant us, who now remember him in thanksgiving, to be so faithful in our witness to you in this world, that we may receive with him the crown of life; through Jesus Christ our Lord, who lives and reigns with you and the Holy Spirit, one God, for ever and ever. Amen. 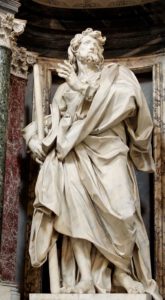 Of course, this has never stopped the wider church from filling in the gaps — as you’ll see, neither will it stop me. Some legends hold that James the son of Alpheaus lived to ninety-six years old and died by crucifixion at the hands of the Jewish authorities in Ostrakine in lower Egypt. His body was then sawed in half. This is dubious for many reasons, including the fact that crucifixion was a favorite execution method of Roman, rather than Jewish, authorities.

But since I’m already giving space to dubious claims, I want to offer a new one, entirely of my own creation, and equally bereft of any evidence. In Mexican Spanish, we add a diminutive to people we feel an incredible amount of affection for, to those we love and adore. Mexican Spanish contrasts with America’s obsession with “bigger is better” by linguistically shrinking everyone we love to make them cuter and sweeter and more adorable still. I’d love to believe that “the less” is, in fact, a diminutive rooted in affection. If so, then Mark 15:40 is talking about James the little guy, James the adorable apostle, James the cherished one. Which James, exactly, this passage refers to remains a mystery, but to my mind that’s still a James worth voting for.

Collect for James the Less
Almighty God, who gave to your apostle James grace and strength to bear witness to the truth: Grant that we, being mindful of his victory of faith, may glorify in life and death the Name of our Lord Jesus Christ; who lives and reigns with you and the Holy Spirit, one God, now and for ever. Amen.

Thomas More vs. James the Less

James the Less: Statue of St. James the Less in the Archbasilica of St. John Lateran by Angelo de Rossi [wikipedia]

311 comments on “Thomas More vs. James the Less”